What do the first 4 letter stand for? Are they company name that made the tool or something else? ( From history )

I was asked if the letters of the image are Japanese or not.

I answered they must be Chinese since Japanese does not have the first letter.

What would the first 4 letters stand for?

Thank you for your help in advance! 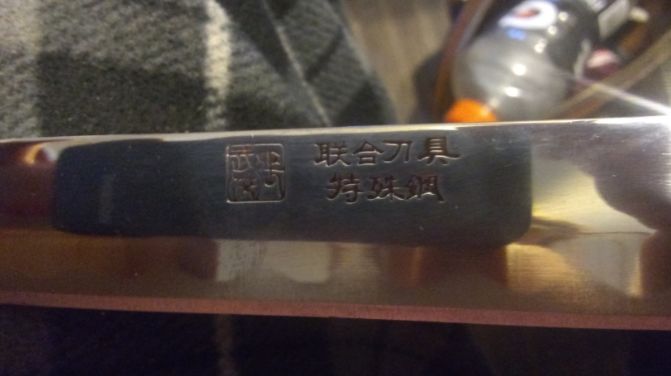 The text is verbatim:

張武傑 (seal of a person called 張武傑). Maybe this is supposed to suggest that 張武傑 was involved in the manufacturing.

The name of a company called 联合 cutting tools. 联合 should not be translated into union here, but treated as a proper noun. It might be in imitation of an American company originally called Union Cutlery Co., now called Ka-Bar Knives., Inc; this company's Chinese name is frequently rendered as 联合刀具.

Special steel. According to baidu, this is a non-standardised grade of steel, so it doesn't really mean anything.

3
Meaning and origin of 小確幸
2
The usage of 醒来 vs. 睡醒, and a little bit about 睡觉。
5
Are there Escher sentences in Chinese? [kinda technical]
0
Does the chinese letter mean the number, one?
1
Meaning of this word (Character identified: 緣)
0
What is the meaning of the seal in the picture? (Character identified: 譜)
3
When you first meet someone, sometimes they say (for example): " 我是小朋...“
3
What are some example sentences for 现代汉语词典's first definition of 论证, which means something like "argumentation"?
1
Teapot mark in small seal characters?