What is Alex and John Dent-Young's translation of this passage of the Water Margin?

This is the translation done by J.H. Jackson:

Lu Da went to the monks’ dormitory, and lay down to sleep. On either side of him was a monk, and they both pushed him; saying, “Get up! This won’t do! As you have left home, why do you not sleep in a sitting position?”

“I am going to sleep, and what is that to do with you?” answered Lu Da. A monk exclaimed, “What a calamity!”

Lu Da shouted, “Even a tortoise I shall eat; what calamity will there be?” The monk replied, “Of course there will be a calamity.” Lu Da said, “A tortoise has a big belly, but the fat is sweet and nice to eat, so why should there be a calamity.”

The monks took no more notice of him and let him sleep.

This is Sidney Shapiro's version:

When Lu got back to the meditation room, he threw himself down on his bed and went to sleep. The monks meditating on either side shook him into wakefulness.

“You can't do that,” they said. “Now that you're a monk, you're supposed to learn how to sit and meditate.”

“If I want to sleep, what's it to you?” Lu demanded.  “Evil!” exclaimed the monks.

“What's this talk about eels? It's turtles I like to eat.”

“There's nothing bitter about them Turtle belly is fat and sweet. They make very good eating.” The monks gave up. They let him sleep.

Apparently there is a newer translation titled The Marshes Of Mount Liang, by Alex and John Dent-Young, that I cannot seem to find.

Does anyone have their translation of this passage? I believe it would be in the book entitled The Broken Seals: Part One of The Marshes of Mount Liang.

I am sure the passage you want is there. But it is hard for me find the exact page for you since I am a Chinese. 😜

On p. 94 of The Broken Seals: Part One of The Marshes of Mount Liang we have: 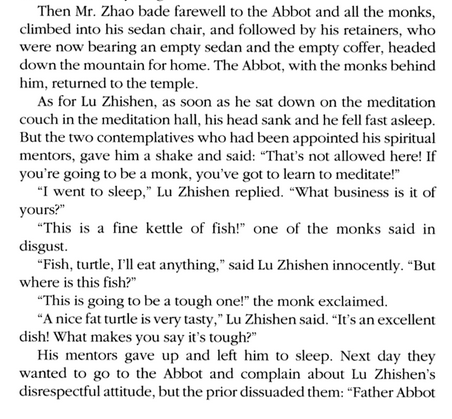 The Abbot, with the monks behind him, returned to the temple.

As For Lu Zhishen, as soon as he sat down on the meditation couch in the meditation hall, his head sank and he fell fast asleep. But the two contemplatives who had been appointed his spiritual mentors, gave him a shake and said: "That's not allowed here! If you're going to be a monk, you've got to learn to meditate!"

"I went to sleep," Lu Zhishen replied. "What business is it of yours?"

"This is a fine kettle of fish!" one of the monks said in disgust.

"Fish, turtle, I'll eat anything," said Lu Zhishen innocently. "But where is this fish?"

"This is going to be a tough one!" the monk exclaimed.

"A nice fat turtle is very tasty," Lu Zhishen said. "It's an excellent dish! What makes you say it's tough?"

His mentors gave up and left him to sleep.

Not the answer you're looking for? Browse other questions tagged resources or ask your own question.

7
Are there some free fonts for the small seal, large seal, and even oracle bone script styles?
0
What are some good resources for 相声 and 小品?
3
Is there a list on the web where I can find Cantonese special characters and their meaning?
0
What book is this passage from?