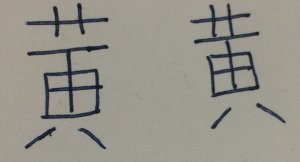 1
Why are there four ways of writing 黄?
1
What is the signature and red seal on my landscape painting? (Characters identified: 廣城作)

5
Writing sheets generator
3
Does a similar system to a pangram exist for handwriting practice
2
Stroke order of 㠭
0
Handwriting Certain Radicals
3
Does cursive script have any order logic?
1
What about the orthography of 苹 (like in 苹果)? It seems consensus is missing
0
How do I specifically find handwriting advice videos on TikTok 斗音?
0
How do I handwrite 小心翼翼 well?