Quoting Wiktionary, the glyph origin of the character 「腺」 is as follows:

A 国字 (kokuji, “Japanese-coined character”) coined in the late 1700s–early 1800s by rangaku scholar Udagawa Genshin as a translation for Dutch klier (“gland”), as an ideogrammic compound (會意): ⺼ (“flesh; body”) + 泉 (“spring; fountain; source; producer of liquid”), together expressing the idea “part of the body that produces liquid secretions”.

And the origin of its pronunciation is described like so:

The reading sen is based on the kan'on of the 泉 base.

Which yields a 慣用音 of 「せん」(sen). However, it seems that other Sinitic and Sino-xenic languages' pronunciation of 「腺」 doesn't match with 「泉」, but rather 「線」. For comparison:

Japanese seems to be the only language where the reading is consistent across all three characters. Why is this the case? Is there a connection between 「腺」 and 「線」? Or was there simply an error when 「腺」 was introduced to China/Korea/Vietnam?

The source material from the Shen (2011) reference (First report of the committee on medical terminology appointed by the China medical missionary association: Terms in anatomy, histology, physiology, pharmacology, pharmacy) does not appear to be available on the web, but there is no explicit indication that they adopted the pronunciation 「泉」. This is what the reference actually says:

What's more, even though the committee report seems to have used the Romanisation Chüuan, the source material text smells more like an orthographic translation from Japanese. 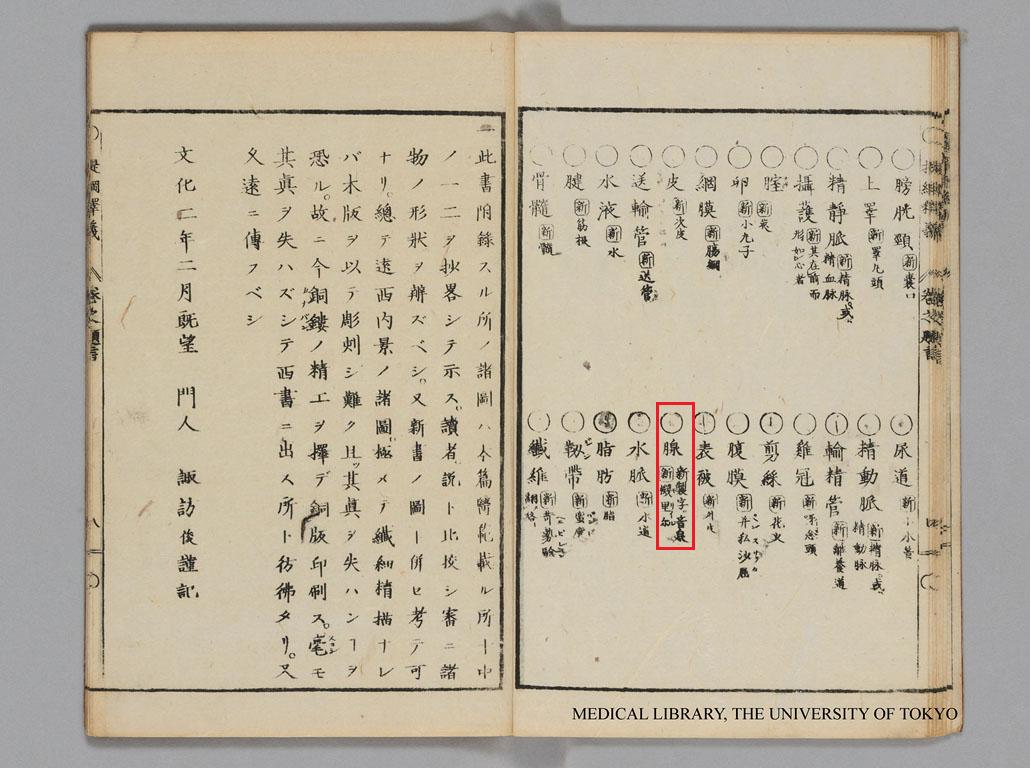 Without paying attention to Japanese sounds, one might directly translate this as

by transcribing「泉」into Chinese sounds, because the target language is, well, Chinese. But First report of the committee on medical terminology is an English text!

You may have a look at Chinese materials which explicitly define the pronunciations:

My explicit take on the questions:

Japanese seems to be the only language where the reading is consistent across all three characters. Why is this the case?

This is because Japanese is rather phonologically poor; the distinctions made in the other languages have merged in Japanese.

Is there a connection between 「腺」 and 「線」?

Not in terms of meaning. The original logic behind choosing「線」for the reading of「腺」may be lost; all we know is that Chinese dictionaries have defined this reading early on, and some Chinese topolects may pronounce them similarly.

Or was there simply an error when 「腺」 was introduced to China/Korea/Vietnam?

I have a few speculations but no hard evidence:

泉 is pronounced as せん（sen） in Japanese. Many modern scientific terms were first translated into Japanese（in 19th centrury Japan was open to West World）, and then some Chinese scholars just borrow the term from Japanese Characters.

we just call it 「線」、「限」，no reason and no one ever think about question like this. never connect it with 「泉」，in our eyes they don't event look the same.

although we have a slang called 有邊讀邊，沒邊讀中間 XD