If not mistaken, the government in Guangdong once published a series of dictionaries of the languages of Guangdong, including Cantonese, Hakka, and Hainanese. However, I don't remember the name of the series. (EDIT: I was mistaken. I was thinking about Guangdong Romanization (廣東拼音方案) for Cantonese, Hakka, Hainanese, and Teochew)

The 海口方言词典 (Haikou Topolect Dictionary) is the go-to for Hainanese dictionaries. Part of the venerable 现代汉语方言大词典 (Great Dictionary of Modern Chinese Dialects) series, it was published in 1996, and can be accessed in libraries around the world. The transcription of sounds is done in IPA with Chao tone letters.

For Wenchang specifically, there is the 方言 chapter of the 文昌县志 (Wenchang Annals, I suppose), published in 2000 and also found in libraries. The related dialect of Qionghai is also recorded in part 25 of its Annals (琼海县志).

Otherwise you will have to glean vocabulary items from scientific journals and websites. E.g. the 海南闽语的语音研究, a study from 2006.

It also looks like《方言》1986年第2期 has an article called:

I know this isn't really helpful but here's a horrible screenshot of a terrible picture: 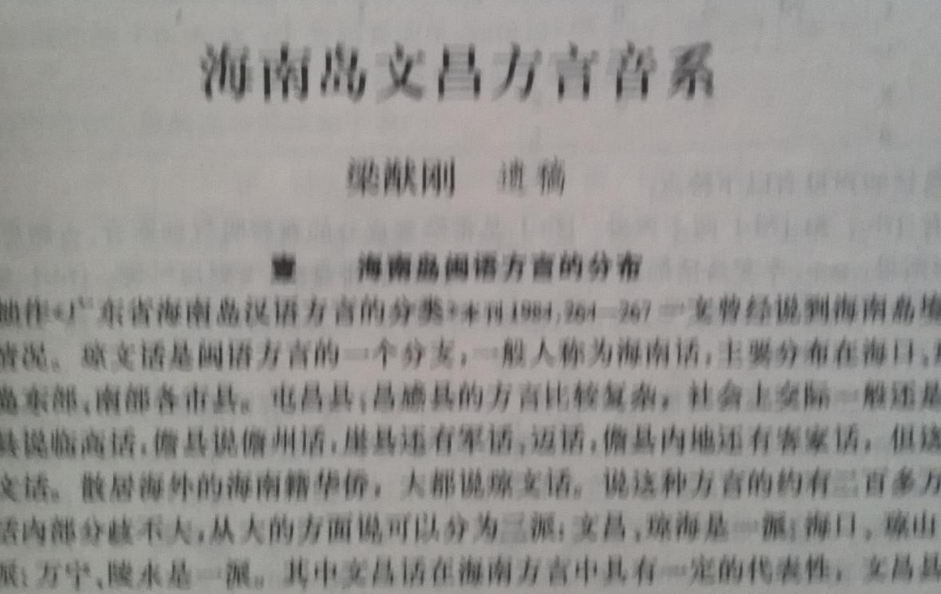 Not the answer you're looking for? Browse other questions tagged topolect resources dictionary or ask your own question.