Why are words like 天、面、先、盐 romanized in pinyin as tian, mian, xian, and yan, even though the ending is pronounced [iɛn], and would be better represented as -ien? Likewise, why are words like 卷、全、选、元 romanized as juan, quan, xuan, and yuan, when the final is pronounced [yɛn] and would be better represented as -uen? (at least the way northern Chinese people pronounce it – it seems that southern Chinese people pronounce it as [yan])

Is it that those words actually were pronounced with a [ian] and [yan] final in the past? That doesn't seem like a complete explanation, as Wade-Giles uses -ien, and Wade-Giles is from 1892 (although it does use -üan and not -üen).

Yale romanization in particular was supposed to be designed to be intuitive for English speakers to pronounce, which suggests that its yan and ywan were not pronounced [iɛn] and [yɛn] at the time, but rather [ian] and [yan].

Pinyin also draws inspiration from Zhuyin in other ways, such as the tone accent marks and the spelling of bopomofo (rather than *buopuomoufuo).

Perhaps Zhuyin could have created a dedicated -ên symbol, but overall, Zhuyin is somewhat minimalist in its inventory of finals. For example, it could have made sense to have dedicated letters for -in and -ing, rather than representing those sounds with -ien ㄧㄣ and -ieng ㄧㄥ. In fact, the character ㄣ -en is derived from 乚 yǐn, even though yin and en are different syllables. 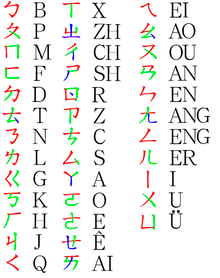 Putonghua is based on one typical Northern dialect. Maybe now southern and northern people read the same character differently, as in [jεn] vs [jan] [in IPA symbol], but the romanization is based on the northern pronunciation.

The the vowel in "an" is pronounced differently depending on the context it occurs in, but the realisations have been analysed differently by different linguists:

Like the mid vowel, the low vowel has several variants, and there is again some disagreement on their surface values. [...]

In (55) I compare four proposals (the underscore in the top row indicates the location of the low vowel; [a] is front in all transcriptions).

While Chao and Xu make a distinction between "-ian" and "-üan" (as represented in Wade-Giles), Fu treats them as the same (as in Zhuyin and Pinyin). The latter treatment is consistent with Chinese rhyme harmony:

13
Why were some letters like Q, X, C, chosen for Pinyin which confuse non-Chinese speakers?
11
Why one-to-many mapping between IPA and Pinyin?
1
which one is correct and why "我看书看很长时间” or "我很长时间看书”
1
Why would the name of the 慈祐宮 temple in Taipei sometimes be written "Cinyou" instead of "Ciyou"?
7
Why e is pronounced differently in de (的, 地) and ye (也,夜)?
4
Why the pinyin of 鱼 is yú instead of ǘ?
12
Why is the Pinyin for 波 bo1 not buo1? And why is 多 duo1 instead of do1?
3
Is the pinyin for 他撇了撇嘴 actually "tā piē le piězuǐ" (as given by Pleco)? And if so, why are the two 撇s pronounced differently?