Is there a toned pinyin keyboard on iOS?

Instead of showing all the Chinese characters that matches the ma regardless of the tone when the user types ma: 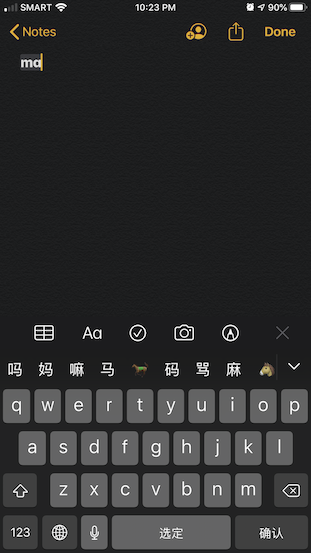 the keyboard should not show any Chinese characters.

Are there any iOS keyboard (or even Android) that facilitates that?

This way, the learner is forced to learn the proper sound of each Chinese characters.

To clarify, currently this is how iOS behaves when the user explicitly indicates tone, example for ma1: 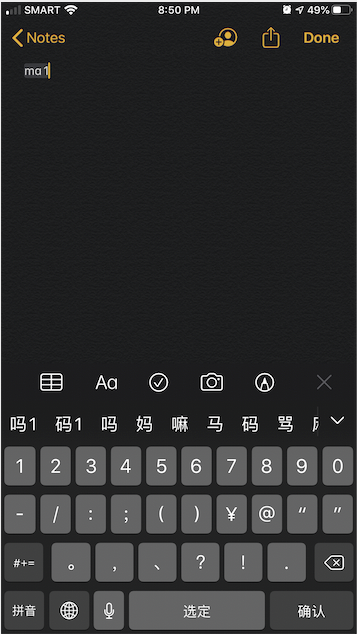 The Hanzis that iOS presents to user are not filtered from the tone the user types (e.g., ma1). iOS just merely shows all ma regardless of tone. Thus with ma1, iOS presents these choices to users:

There is a way to add toned pinyin keyboard on an iOS. I haven’t throughly look at the website,but there are some good references on it.

Here is the link: https://yoyochinese.com/blog/how-to-type-pinyin-mandarin-chinese-tone-marks-windows-mac-os

Not the answer you're looking for? Browse other questions tagged tones or ask your own question.

8
How to convert from hanyu pinyin to IPA?
8
Is there a tone sandhi rule that “4 3” changes to “4 0”?
3
Pinyin to Chinese characters
2
Tones and Pinyin, Foreigners vs Natives
1
这个 and 个 Pinyin
4
Should tone sandhi be written in pinyin?
4
Sogou IME (on Ubuntu): How to output pinyin with tone marks?
1
Where can I find a collection of samples of Mandarin spoken words, annotated with pinyin and tones?
2
On Linux, how do I output Chinese Characters (not pinyin) using tones in the input