How do I find the rules used to create the simplified version of the characters?

OK, some of the characters we know come from the regularization of the cursive form, like the radical 言 became 讠, etc. But how do I find how some really weird characters came from, like 舊->旧, 靈->灵, 異->异 and so on?

EDIT: To make it more clear, the above character are only examples. I'd like to know where they came up with the rules of EVERY AND EACH of the simplifications. Where do I find those rules?

Before we try to answer the question proper, we need to first clarify that there are many 'simplified versions' of characters throughout the course of history, happening in many different times and under multiple context.

The natural development of a character form would usually be from a simple to more complex structure to differentiate nuances in meaning. There are also various cases in which complex character structure need to be simplified for practical reasons.

Changes in form also result from the transitional history of the Chinese Script from Oracle Bone 甲骨 through the Bronze Script 金文, Seal Script 小篆, Scribe Script 隸書 and Standard Script 楷書 used today. The most significant changes are from Seal to Scribe, so a lot of 'simplification' would be happening at that time.

There is also the independent Cursive Script tradition. There were two, to be precise - the 章草 Zhang1cao3 from the time of the Scribe Script to the 行草 Xing2cao3 which is conventional shorthand for the Standard Script [SS]. These have their own rules for simplification that is to be reckoned with for its own sake.

If what you meant by 'simplified form' were all of the above, you might have to read several phD theses to get all the answers. So, I naturally assumed you were basically concerned with the rationale for creating the corpus of simplified script during the Simplification Movement in PRC in the 1950s.

As you would find out from the answer below, many historical instances have been incorporated into the corpus. Making Simplified Chinese [SC] characters a conglomerate of different principles used in different context at different times, some as recent as the Simplification Movement itself.

The major corpus of the SC characters defined in the Commonly Used Table of Standardized Chinese Characters 《通用規範漢字表》 are actually historical forms of writing, known in Chinese as 傳承字 chuan2 cheng2 zi4 or "passed-down characters".

These come in two categories. One is a historically different way of writing the same word in Standard (block) Script or 楷書 kai3 shu1. We shall call them Standard Script Alt-Forms [SSA]. The other is Cursive Script [CS], adopted in block form as the Simplified Character.

Here's one interesting example for the former case:

While the two characters have different origins (於 is a bird and 于 is a musical instrument), in most of the early Chinese texts, 于 and 於 are found to be used interchangeably as a preposition with the sound of yu2.

This can be seen in the Zhuangzi, a Pre-Qin text:

Therefore the Sage does not abide by (worldly dualistic principles) but rather sheds light into (worldly feuds) from (the perspective of) heaven.

The same book contains prepositional usage of 於, in another of its seven inner chapters:

If we were to hide a boat in the valleys, or a mountain in the marshes, it would have been secure enough.

Loan instances aside, the character 于 was actually more consistently used as preposition than 於, which was commonly used as an interjection ("Oh!"), with the sound of wu1.

There is textual evidence that 于 was preferred over 於 as preposition in very early Chinese texts (dating back to the Western Zhou dynasty):

King Wen is on high; Oh! bright is he in heaven.

So the adoption of 于 as a simplified character was actually a return to an old form.

Traditional Chinese [TC] could use both interchangeably anyway (as evident from the Classical texts quoted above), so I highly suspect that 於 as the "standard" TC character for preposition was actually a ROC reaction to the Mainland "simplification" of 于. (That awaits further study to confirm.)

A lot of these pre-existing SSA characters are vulgar forms of a single character in history. Eg. 體－体、塵－尘、無－无、靈－灵 (asked above) .

Others are earlier forms of the same character, which often means the simplified character has a more pictographic quality: 采－採 (hand plucking fruit from a tree)、从－從 (one man following another)、网－網 (a net).

A significant number of SSAs come from loan forms: 后－後、里－裏/裡、余－餘. These are often sound loans which may or may not be related in meaning.

For example, 后 means Empress, while 後 is behind. The meanings are related because a good Empress should leave many offspring behind. 《禮．曲禮》：「天子有后。」〔疏〕后，後也，言其後于天子，亦以廣後胤也。

Many traditionalists would criticize these cases as a corruption of the original meaning of words.

As for the latter, 舊－旧 in question would be one of them.

As can be seen in the calligraphy below: 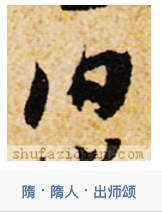 It can be seen in this less cursive script that the「|」lies just to the left of the 「臼」. 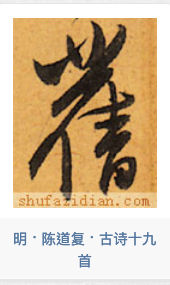 Other cursive forms of the same character are: 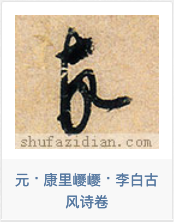 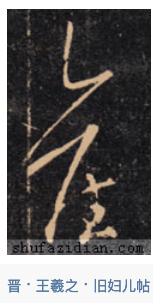 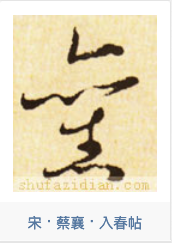 Other examples of the CS class of simplification are: 車－车、杨－楊、專－专 etc. Most of these are highly recognized, legitimate forms of simplification, crafted by the literati. (As opposed to the vulgar form introduced above.)

The remaining (the real simplified characters) would be characters with arbitrarily simplified (or, some would say, corrupted) radicals, the 半記號字 Ban4ji4hao4zi4: 对－對、观－觀、鸡－鷄、 聂－聶、轰－轟、区－區、冈－岡.

Characters of abbreviated form, in which only the 'essential' radical(s) is(are) left behind: 开－開、关－關、医－醫、声－聲、時－时.

And characters simplified though the manipulation of its sound component. Many these are actually newly-created characters just for the sake of simplification.

We may swap one for another: 邻－鄰、艺－藝; or create entirely new-looking forms with little to no resemblance of one another: 惊－驚（京 and 敬 swap for sound, 忄 and 馬 for meaning; the traditional form has the specific meaning of startled steed）、护－護 (The 又 in 護 is also symbol for hand, which is swapped for 扌; 戶 is the new sound component that's been created).

Answer to the "How" Question:

For those of you who can read Chinese, a comprehensive account can be found here.

I also highly recommend the expert edition of the etymological dictionary developed by Outlier Linguistics.

3
What are the earliest examples of “simplification”?

14
The origins of “AA制”
2
Glyph origin or Word Etymology Resources
1
How is the meaning of 不得已 formed?
8
Glyph origin of 也
1
What's the etymology and significance of yuenyeung (鴛鴦)?
1
How come 将 is a “future marker” and a “passive marker”?
4
Glyph origins of the character 岁/歲?
1
Is 賖 just a variant of 賒？