How many characters do I need to learn?

How many Chinese characters would I generally need to learn to be able to handle most text in typical every day circumstances?

How many would be required to be considered fluent?

Are there any good resources for learning the most commonly used characters?

Think about your vocabulary in English. If you pick up a book with many words you don't know, you may still be able to comprehend it based on the context of the words that you might not know. Same applies for Chinese.

If you are interested in numbers and facts, here are the results of some studies:

The above table tells us that the top 1000 characters account for between 86% and 91% of the characters occurring in the real world. Assuming, with great hope, that there is a good correlation between the top 1000 characters found in these studies and the 1000 characters that most second year college students are supposed to master, we can conclude that there is a light at the end of the tunnel. Finally, while we wouldn't advocate studying characters solely based on their high frequency, we believe that studying such lists is a reasonable supplement to conventional study programs. Such lists also provide a sense of just where one is on the path to full Chinese literacy.

The results from the above studies have been used to generate two different sets of flashcards.

I had heard various numbers over the years, so I guessed at 4000 and generated computer flashcards for reading and writing all the Chinese vocabulary I'll need for the foreseeable future. There are currently 32614 cards with 4166 characters and 18385 words. They are divided into separate files, each with about 100 cards in it. You can download the flashcards for the first 700 characters from my Google Code page. I'll publish the remaining characters after I'm happy with the current set.

The cards cover English definition, simplified character, traditional character, and pinyin pronunciation of each character, as well as the most common words using those characters.

The software is Mnemosyne, which uses the spaced repetition technique to schedule when you review the cards you already know. It's not fast, but it seems to stick a lot better than manually reviewing vocabulary lists. 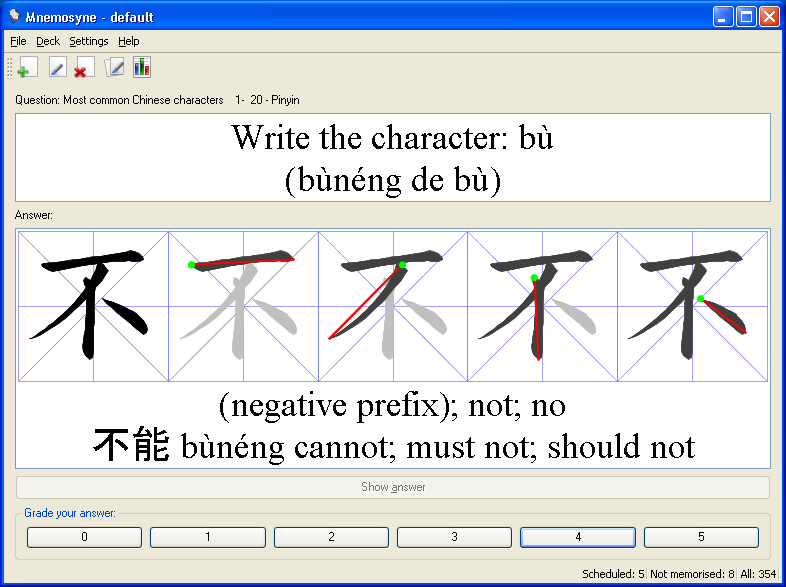 In a couple of more recent projects, I tried to build some tools to help with reading practice. I sieved through Chinese text looking for sentences that use only the characters I know. My first attempt was with Twitter updates, but it was kind of a slow process to find and translate them. More recently, I found a huge collection of translated sentences on Tatoeba. I've collected all the sentences that used the 500 most common traditional characters and posted them on my Google Code page. They're sorted with the most common characters at the start of the page.

If you want to have a quantitative answer you can look at the commulative character frequencies of larger Chinese text corpora. If compiled a list of the most common Chinese characters here (using this code).

These numbers differ of course depending on the text corpus and the numbers quoted here are valid for the Chinese Wikipedia.

Based on my experience, about 2000 characters will give you command of most texts. Perhaps 4,000 will make you fluent. For the first 2,000, I recommend, Chinese Characters: Learn & Remember 2,178 Characters and Their Meanings.

According to Zhonghua Zihai, the largest Chinese character dictionary, there are more than 85,000 Chinese characters! However, research (Huang 1994 and Da 2004) shows that the most frequently used 1200 Chinese Characters account for about 90% of the characters occurring in the real world. Therefore, this is about the number of characters needed for a learner to reach intermediate level, which is also the level to be able to communicate effectively, or in other words, to be able to carry on a daily conversation in Chinese for average Chinese learners or to be able to do business in Chinese for business people.

My answer to the first question is that the Official list of 2,000 characters contained in the book are what I would recommend.

I am not qualified to answer regarding fluency and accept the answer of others.

If you're interested in a good offline reference that you can study at length, I'd recommend McNaughton and Li's (1999) Reading & Writing Chinese (Revised Edition). The traditional version is just fine as it shows both Traditional and where needed Simplified versions of the characters: 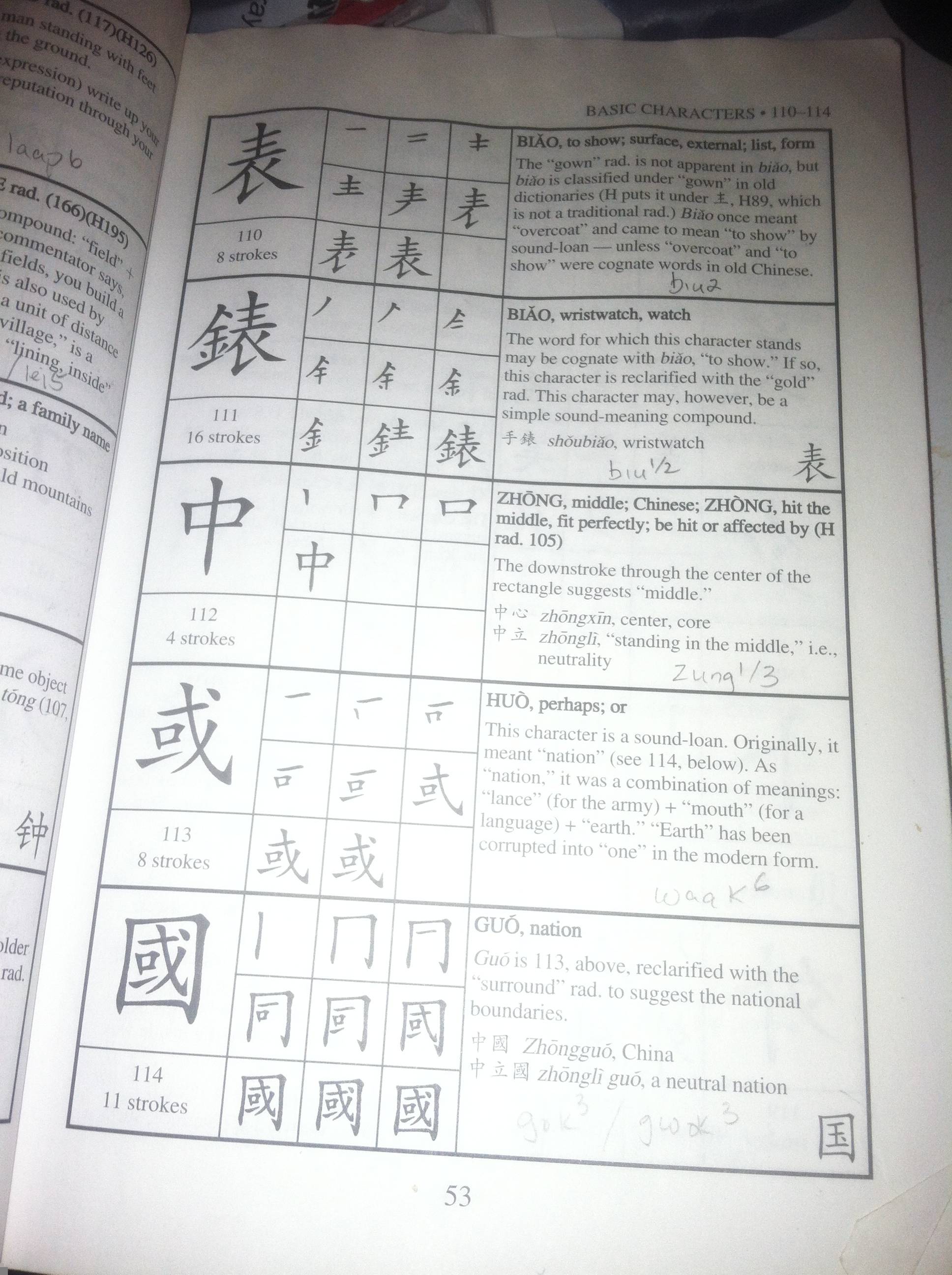 Other properties of this text (ignore cantonese handwritten notes):

You would probably need to learn 500 for very basic communication, but to be able to talk to someone, 2000 is ok.

I am a native Chinese teacher from iChineseLearning. Hope my answer will help you. If you are a beginner, you need to learn it from learn characters. In addition, the grammar is the most vital part of Chinese learning, if you want to speak fluency. The intermediate Chinese grammar is for those who have mastered at least 600 Chinese words and related grammar knowledge. You will enhance on the grammar knowledge and explore the new. After this, you will be able to communicate in Chinese on topics of life, study and work in a relatively fluent manner. So learn Chinese grammar Chinese-Grammar is necessary.

Counting the characters doesn't make sense at all. It doesn't really say much about your proficiency.

Not the answer you're looking for? Browse other questions tagged characters writing reading or ask your own question.

10
How to get started learning Chinese?
8
How many distinct characters are there in a typical Chinese book?
1
Is it common to learn individual characters before two-characters words?