Why do the onomatopoeias describing the cry of frogs sound so different in Chinese and English?

The words "呱呱" and "ribbit" are onomatopoeias that represent the sound of frogs, respectively in Chinese and English.

I hardly see any similarity between these two sounds. Why does the cry of the same animal sound so differently in Chinese and English?

Instead of directly answering your question I'm going to post this picture: 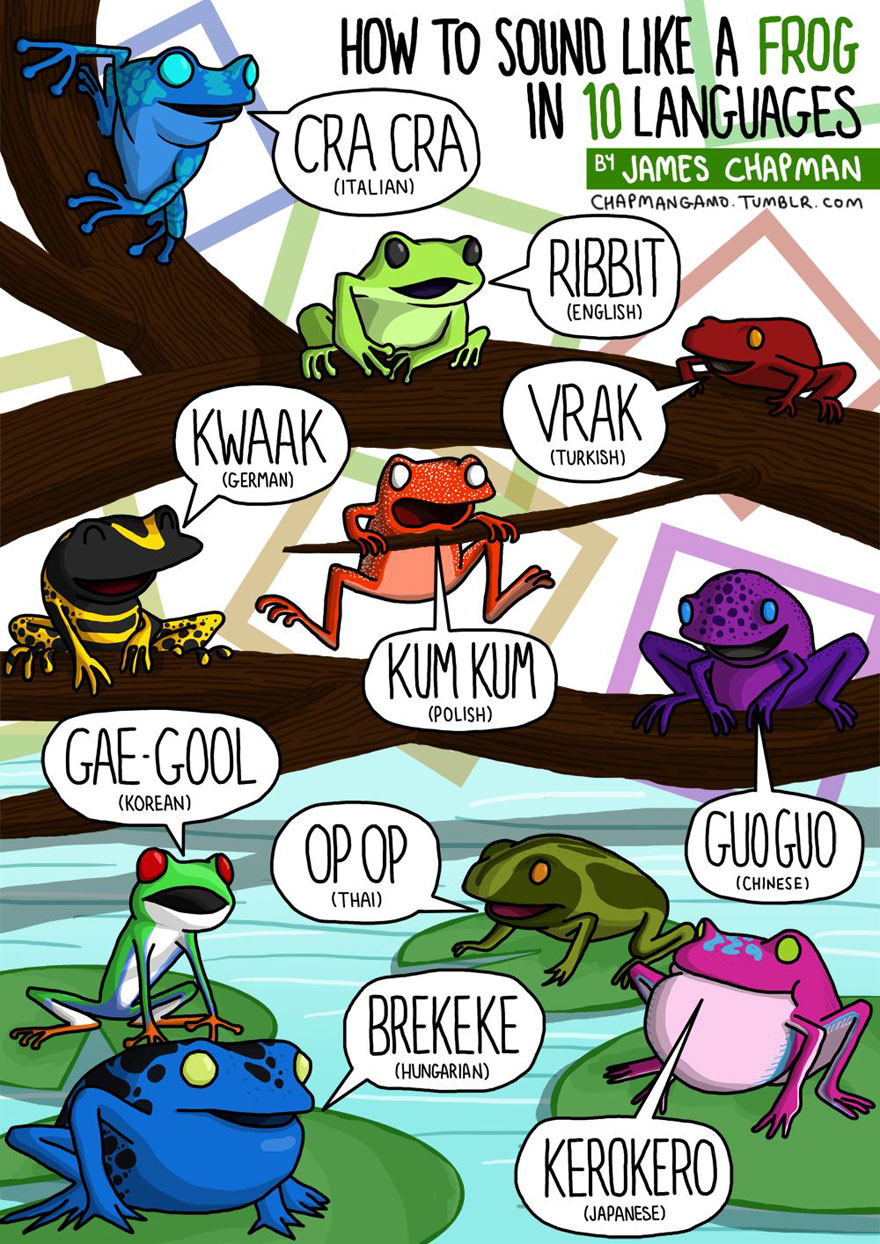 Unlike in English, where you can combine random letters of the alphabet to form nonsensical words to mimic a sound, sound effect words in Chinese are all borrowed from existing characters, sometimes adding the 口 radical to indicate it is a sound, e.g. 口 + 瓜 = 呱, we can only choose the character similarly pronounced like the sound effect the most.

Frogs make more than one kind of sound, 'ribbit' is just one of them. "呱呱" pronouns as "gua gua" is similar enough to a kind of sound frogs make

It is easier to match English sound effect with Cantonese because it has 9 tones instead of only four in Mandarin, 'Ribbit' would sound like 列別 /lit6 bit6/ in Cantonese

If you don't like 呱呱, you can use 咯咯, but you can't make up a new character for the frog sound

If you ask the frogs themselves, I think you might croak at their answers?

Here's one all could agree on, cats, "meow" in English and "喵喵" in Chinese, but I doubt the cats themselves would agree.

Not the answer you're looking for? Browse other questions tagged etymology word or ask your own question.

10
哪儿 vs. 哪里, Difference in Meaning?
4
What's the difference between 雕像 and 雕塑?
16
Are 乒 and 乓 used in classical chinese?
4
Why is the character 漢 built in such a weird way?
8
Is there any relation between the Cyrillic Ш (sha) and the Chinese 山 (shān)?
2
Does a Chinese character almost-always represent a word?
5
Why is New York called 紐約?
1
Why does anger has something to do with spleen in both Chinese and English?
0
How are Chinese words created (both spelling and sound)?
1
How to create word/character sequence in Chinese that sounds the same as a word in English (or any other language)