What are the earliest examples of “simplification”?

It seems that there are many "simplifications" in cursive that have existed for far longer than Simplified Chinese characters have.

There are some mentions of this here: How do I find the rules used to create the simplified version of the characters? between @EnricoBrasil and @droooze.

My question is, what are the earliest examples of "simplification"? Perhaps it can be seen in the standardization of cursive. Ideas?

On a system level, there was never a movement of simplification until the early 20th century. Chinese characters developed from less refined writing techniques and simpler shapes to more standardised writing styles and characters with more complex structures. This is because simple shapes have two (possibly related) problems:

Chinese characters thus naturally piled on more components to existing characters to make enough distinguishable characters to represent the language sufficiently. Simplifications are therefore relatively rare, and are only one kind of process of how characters have changed in general. Exclusive simplifications (which make a former character obsolete) are close to nonexistent.

This being said, one can sometimes find individual characters that were known to be unambiguously simplified at one stage from a previously more complex character. I'll show two examples, the first which people would be more familiar with but doesn't really fulfil the criterion earliest, the second to actually fulfil this criterion (in an approximate sense).

The current form of「与」is a result of an incorrect shape analysis from Shuowen (hence why using Shuowen to demonstrate glyph evolution without checking modern publications on the subject can lead to serious errors), and is really just「與」, inclusive of its corrupted「牙」component, stripped of its four hands「𠂇𠂇又又」.

「𤘈」is a precursor to「齖」, which has even more components; what looks like「臼」in this character is a shape-approximation of the same picture which forms the bottom part of「齒」.

「伐」(to behead > kill > attack) is a picture of a person「人」and a dagger-axe「戈」, where earlier forms deliberately drew the blade of「戈」across the neck of「人」, emphasising the meaning to behead.

In the simplified form (佚328 and others), most of the shape of「戈」is removed, with only the blade across the neck remaining. The following is a text sample to demonstrate the usage of this shape.

The following text contains both「伐」and its reduced form「⿻人一」, both shown in red. Reading order given by circled numbers ①—⑭. 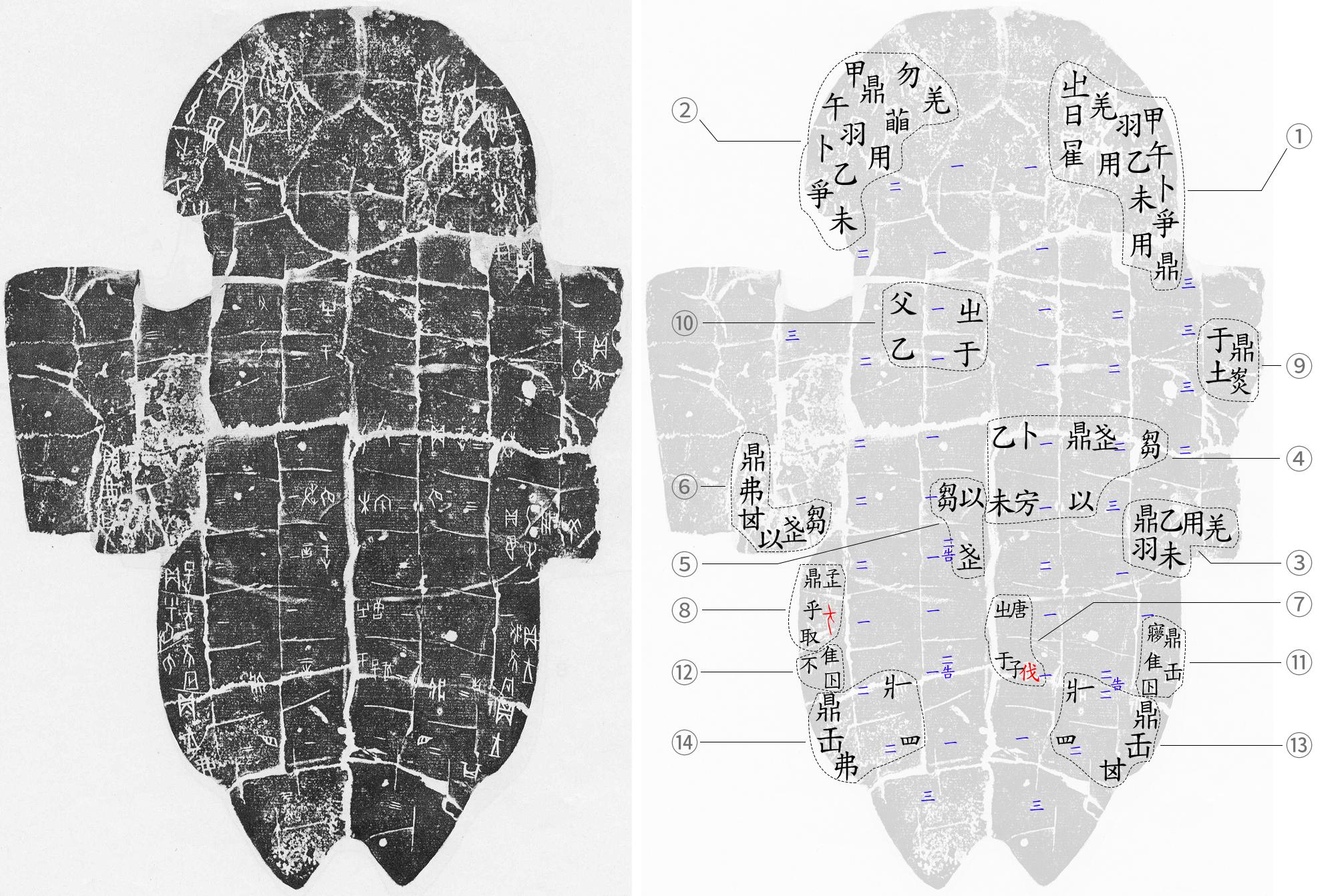 5
How does 矢 look like an arrow?
2
How do I find the rules used to create the simplified version of the characters?

14
What font size for reading simplified characters on screen?
3
Simplification of 蘭（兰）
6
'Simplification' of 夠
2
啰 vs. 囉 in Old Texts
11
Are there any original sources documenting the simplification process?
2
The difference between simplified and traditional Chinese and how should one convert a traditional sentence into a simplified one?
2
In ancient China, was there an equivalent of pinyin?
2
Do the Chinese have text speak?
6
Are there characters in which the radicals are the same but the position changes the meaning?
0
How to do line breaks when mixing in Simplified Chinese characters and non-Chinese characters?