Lately I found out that 打酱油means “buy soy sauce”, but it becomes “beat soy sauce” when translated literally. I know 打 can mean “beat”, so I’d like to know if this word can mean “buy” in day-to-day speech. Are there any other colloquial words which have varied meanings too?

打 in 打酱油 doesn't intrinsically mean "buy". In the last century, soy sauce was not sold in bottles as today. It was produced by the merchant himself, so you need to go to the shop and ladle it into your container from a big jar. 打 is for the action to lift liquid from a jar or well with long spoon / bucket etc. SO IT DOENSN'T MEAN “BUY” ELSEWHERE.

There are 20 meanings of the word "打". "打酱油" should take the 6th meaning, which is 举，提起。Per to Toosky's answer, "you need to go to the shop and ladle it into your container" ladle is the action of put the soy into the container and then lift the bottle. Namely, 举，提起. That's why we call the process 打酱油


answer :
from a Chinese language Dictionary:
与及物动词性成分结合，构成并列结构，「打」的实义虚化，作用是使结合的那个动词表示的意义泛化。例如:
「打扮」、「打扫」、「打捞」、「打量」……
translation :
It combines with a transitive verb to form a paratactic structure. The function of "打" is to generalize the meaning of the combined verb. for example :
「打扮」、「打扫」、「打捞」、「打量」……
In other words:
Take "打扮" as an example . the verb 1 "打" combines with another transitive verb “扮” to form a new verb word “打扮”, it's Paratactic Structure. In the verb "打扮", the second verb 扮 is the core part of its meaning, while the first verb"打" does not express any practical meaning but only expands the application scope of "扮"
Give you a hint:
In fact, we don't care about how these compound verbs are formed. We regard these compound verbs as a single word. for example :
「打扮」、「打扫」、「打捞」、「打量」……;
"打扮" , "打" and “扮” are the same class of things, they are different verb words. But 打酱油、打水、打油、打鱼…… are "transitive verb + object" structure，打's object can be changed.


question 2:“so i'd like to know if daily this word can mean buy".

the answer is no.
in 打酱油、打油、打酒、打水、打鱼…… ，It's the same use of "打". "打" is the act that to take something from an open container containing liquid and bring it back（home or to a certain place）.
1)打酱油、 打油、打酒……
Take "打酱油" as an example.
intrinsically meaning: to take some soy sauce from an open container containing soy sauce and bring it back.
Derived meaning : to buy some soy sauce and bring it back.
In the past, when we were relatively backward, soy sauce was not sold in bottles as today. We need to take our own containers to the store and ladle it into our containers from a big bucket of the merchant.
In modern life, expressions like "打酱油, 打油，打酒…… " are a little old-fashioned. Fewer and fewer people use it. More and more young people use 买(to buy) to replace 打, because now we buy canned soy sauce,Edible oil ,wine…and few people buy bulk soy sauce,Edible oil ,wine…
meaning in Network language: It's none of my business.（the logic of thinking: I'm just passing by here to buy soy sauce,so It's none of my business).
2)打水、打鱼……
Especially in rural areas, these words are still widely used.
打水: to take some water from a well ,river ,pool … and bring it back.
打鱼: to take some fish from a river, pool,sea … and bring it back.

“打” can mean a lot of things. You can check collins.

The meaning "buy" is one of them, and it is used daily.

It means take / pick up (using a bottle/scoop)

The same goes for 打水(water)、打粥(porridge) 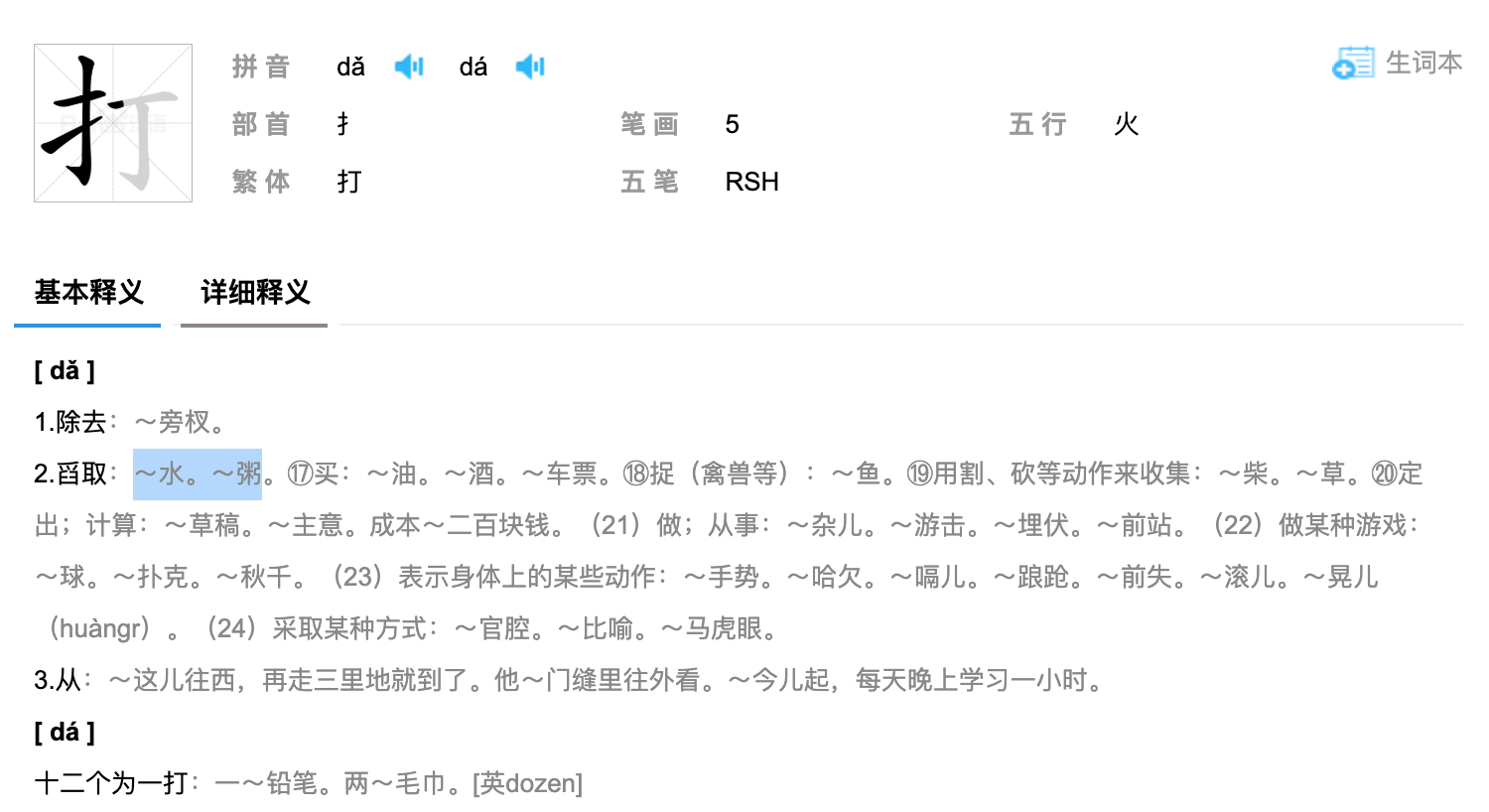 Not the answer you're looking for? Browse other questions tagged grammar slang or ask your own question.

10
What does the Twitter hashtag #壕 mean?
4
What does "yellow face wife" (黄脸婆) mean?
3
What is the meaning of 水 in this text?
2
How to make a tenseless sentence?
3
What does 哈批 mean?
10
What does “tm” mean?
1
Uses of 正好 / zhènghăo
2
What does 他得经历九九八十一难 refer to?
1
Comparison question with implicit 再 zài?
1
How do you indicate a habitual, ongoing action, as opposed to an action you are currently doing?