What does it say in gigantic characters on this building labelled “Treasure Trove of Royal Chinese Cuisine”? (Characters identified: 中華皇家御膳之寶)

There's this restaurant in Beijing (approximate location: Baidu Ditu; I think it's called 御仙楼) which has gigantic letters on the front. The letters are around 3 people high. 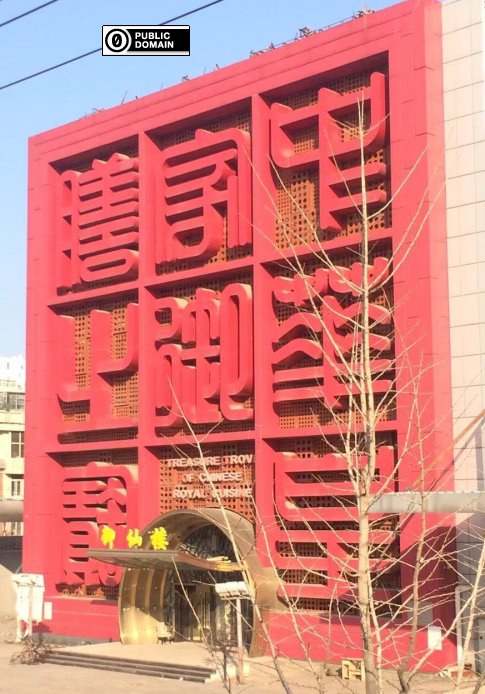 Question: What does it say in gigantic characters on this building?

The bottom-left looks similar to characters 64011 65188 65194 on http://xiaoxue.iis.sinica.edu.tw/ccdb using the method described by dROOOze. The first three components appear to be 宀王貝.

Using an excessive number of clericalified variants (隸定字), I would say that the closest characters are

In the Shuowen Jiezi lesser seal standard, the closest characters are

*Actually, the older structure of 「善」 is 「𦎍」 (⿱羊言), and that is what the photo and Shuowen seal form both are

In a more modern orthography,

There is no character where the doorway is, so there are eight characters in total. The rest of this answer will focus on the more difficult to identify characters.

「中」 depicts a military flag with flowing streamers. This was later extended to mean authority (中央), then centre, middle.

The streamers stopped being written as part of the character very early on, but sometimes they were added back in decorative scripts as horizontal lines protruding from 「中」 (𠁦, 𠁩, etc.)

「華」 (Baxter-Sagart OC: /*qʷʰˤra/) originally depicted a flower, now written as 「花」. The petals of the flower would be stroke-transcribed as 「𠈌」 in regular script (e.g. in the clericalified Shuowen lesser seal variant 「𦾓」). The bottom of the stalk was drawn in the shape of 「于」, which doubled as a phonetic hint (/*ɢʷ(r)a/).

「華」 was also overwhelmingly used for the meaning flourishing > magnificent, splendid (/*N-qʷʰˤra/) very early on via semantic extension from flower. The character 「花」 was invented later to represent the original sense of 「華」.

You're basically looking at a branch evolution here:

「之」 (/*tə/) originally depicted a foot 「止」 pointing away from an abstract place represented as a horizontal line 「一」, indicating the meaning to go. 「止」 (/*təʔ/) simultaneously hinted at the sound.

「寶」 (Baxter-Sagart OC: /*pˤuʔ/, treasure/valuables) actually had about a million variants, mainly because Chinese characters weren't standardised back then and about 90% of bronzeware had the character 「寶」 inscribed somewhere. These variants do share about half their components with 「寶」, however.

The non-standardisation back then affects not only the components' presence, but the location of the components. On a component-transcription basis, the forms displayed here (listed from left to right) are, using ideographic description sequences,

「王」 and 「玉」 had different histories, but converged in shape later. As a character component, the shape 「王」 almost always represents 「玉」 (e.g. 弄, 玻). The times where the shape 「王」 actually represents 「王」 is mostly on the right hand side or the bottom of the character (汪, 皇), and these characters are pretty rare.

I am pretty sure that it says: 中華皇家御膳之寶.

This is how I would draw the character 中 normally. As you can see, there is some empty space on the bottom.

So some people do this too. The extra ink on the bottom balances the character. The flourish does not add extra meaning.

As for 寶, I am reminded of this character because of the 宀王貝 components, as you have pointed out. I believe it is an artistic choice to shift places of the components, as I could not find an example of this particular style online.