In Liang Qichao‘s 戊戌政變記 (pdf) pretty much at the beginning of the second chapter (pp. 129 and 130 of the linked pdf) mention is made of the Emperor trying to promote several able people of his own and thereby incurring ill feeling of Cixi. Then a figure named An Weileng emerges who writes forthrightly to the Emperor and suggests, since regency was given to His Majesty, that the Dowager abstain from interfering with His matters and (so to speak) „pulling his sleeve“. Thereupon an edict is cited, ostensibly penned by the Emperor, which - if I understand correctly - claims to heed the suggestion of the Dowager. Therein An is accused of fabricating tales to estrange Their Majesties from each other and exiled to Zhangjiakou as a warning to others.

Liang presents the Edict and than says:

實西后翦除皇上羽翼第一事也/ roughly: (This) constitutes the first clipping of His Majesties wings by the Western Palace Dowager.

But now I am unsure whether 翦除羽翼 means „clipping wings“ as used f.e. in the Greek tradition (limiting, oppressing) or whether 羽翼 means “supporter” as in “ 羽翼漸成”. Should I translate „clipping wings“ or „removing supporters“? Or is it inherently ambiguous? 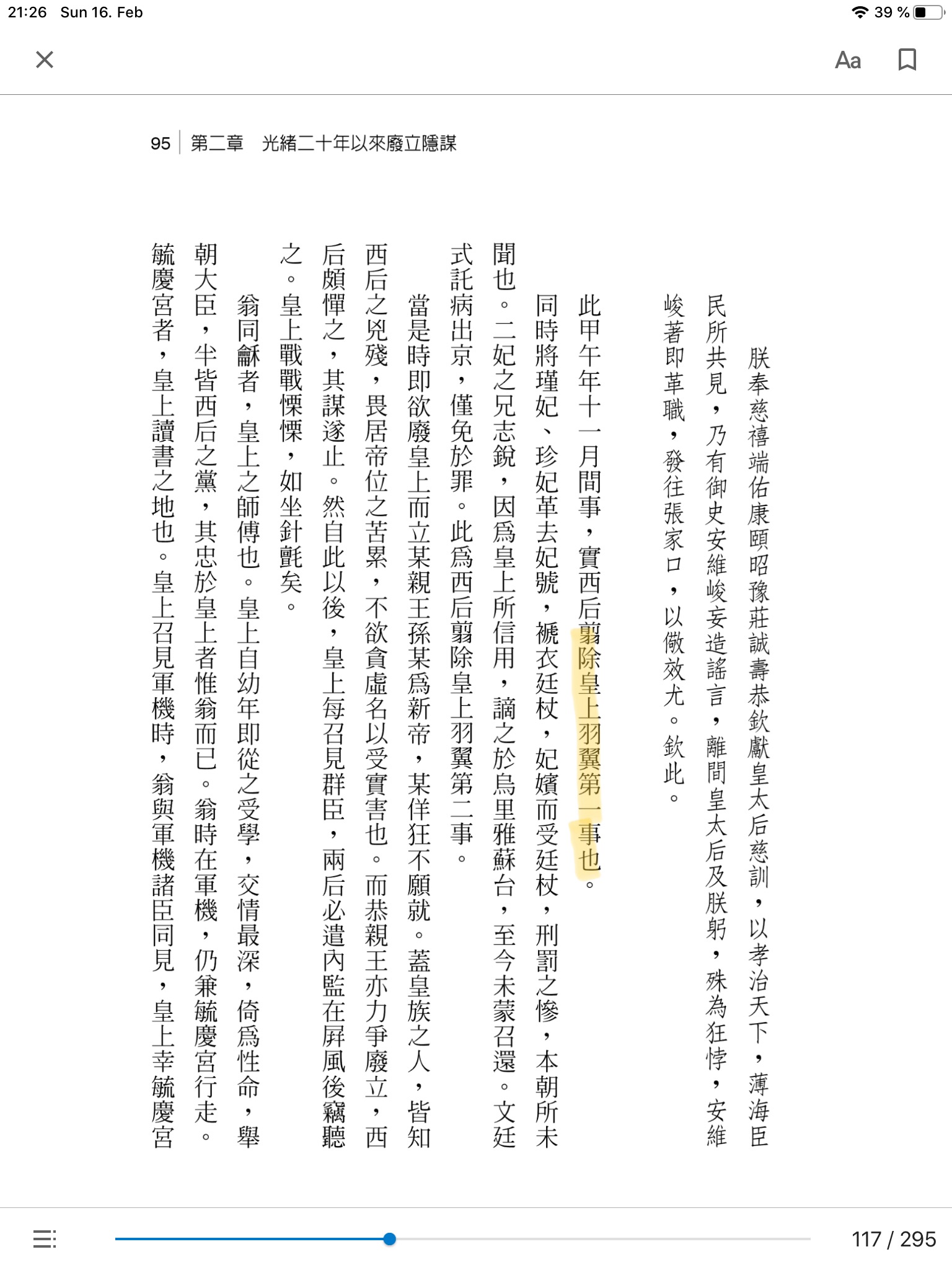 A bird cannot fly without wings ; an emperor cannot rule without able assistants

羽翼 itself is a metaphor for "power base"

well, the wiki had a different version of interpretation of the event of “御史安維峻“.

“御史” is a “censorate official” in imperial china’s civil bureaucracy

“安維峻”, the romanisation would be (pinyin): an, weijun

then, the wiki mentioned:

roughly, the emperor himself issued the order to “strip off” mr an’s post, and sent him away from peking, because the emperor feared empress dowager would issue a more severe punishment.

which interpretation is correct, i’ve no idea.

“軍台” does not means 烏里雅蘇台 (Uliastai). During the Qing Dynasty, military intelligence are sent between 軍站, 軍塘 and 軍台, from large scaled to small, set from the boundaries to the central (Peking). One of the 軍台 was set in the 張家口 (Kalgan), where 安維峻 was sent to. The only thing that 烏里雅蘇台 mentioned was that the 參贊大臣 (an official of military stations of the Qing Dynasty), 志銳 sent him a seal written “隴上鐵漢” when seeing off him.

Not the answer you're looking for? Browse other questions tagged translation meaning-in-context literary-chinese or ask your own question.