Why there is "不” in “太极不是未有天地之先有个浑成之物，是天地万物之理总名否？”

There is this sentence from the opening of the fist chapterof 语类 by Zhu Xi:

Baihua version seems to treat the "不是" part as if it ment "是不是" So the sentence would mean something like:

"Does Tai Ji mean that before Heaven and Earth there was a certain mixture of things and is it [i.e. tai ji] a general name for li of Heaven Earth and all things"

But I do not understand why "不是" should have such meaning? Is it a feature of classical Chinese? Why shouldn't it mean:

"Tai Ji is not (不是) a mixture of things that existed before Heaven and Earth, is it [then] a general name for Li of Heaven earth and all things?"

it would be interpreted as:

the logic of the second verse is:

so, the set (mathematics) of these principles is the collection of each principle; a pantheism view.

back to the question, the quoted explanation of baidu is incorrect 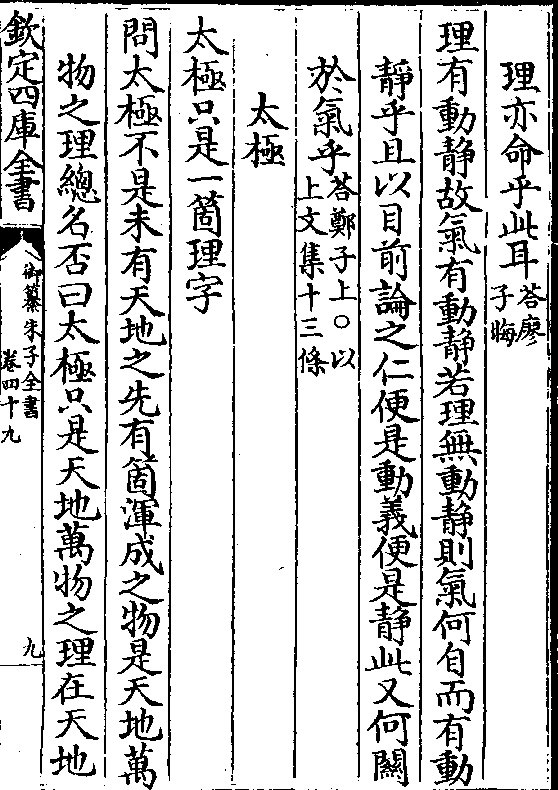 No classical training, but this is fun to look at. I would break it down like this:

太极: the supreme
不是: is not
未有天地之先: not have universe before = before the universe existed
有个浑成之物，: that nature
是: it is
天地万物之理总名: universe all things total
否？: no?

Maybe as a cross reference: The Diamond Sutra, 第七品 无得无说分

"the Tathagata has said that Truth is not a thing that can be differentiated or contained and therefore Truth cannot be grasped or expressed. The Truth neither is nor is not."

Or the breath-taking words of 惠能：