Why do the Chinese characters on my phone and computer look weird?

The Chinese characters appear so strange after I've typed them on my computer and on one of my Chinese apps on my phone. For example, 十分 is different on the photo I've attached than what I am typing just now. I think it happened after I changed the language settings on my phone to Chinese and then back to English. It seems like my google account, which is connected to my phone and computer when I'm surfing, has noticed.

Any ideas for a solution to this problem?

You're looking at shapes according to the Kangxi dictionary form, a variant of Ming typeface. Both 「八」 and 「丷」 shapes will end up looking like

as part of other characters. It's better to try to get your font to display a regular script font (e.g. 標楷體) instead of a Ming typeface font when you're learning.

Print shapes that you see for 「关」 are normally consistent with the right hand side of 「朕」. 「关」 itself is a shape rather than a true character or character component; the shape is variously a handwriting corruption of the right hand side of 「𦩎」, a corruption of 「𦬫」, an abbreviation of the inner part of 「關」, among others. Because 「关」 is not really a character with a firm historical basis, it will be subject to various unrecognisable shape changes across regions and fonts - most regions simply don’t even use/recognise it as a character.

They are stylistic choices of the different fonts as well as standards selected by the authorities. Taiwanese fonts usually exhibit 八 and HK/CN usually use 丷 instead

This is the Wikipedia article describing the Taiwanese standardization.

This is the official document by Ministry of Education ROC, explaining the the standardization. 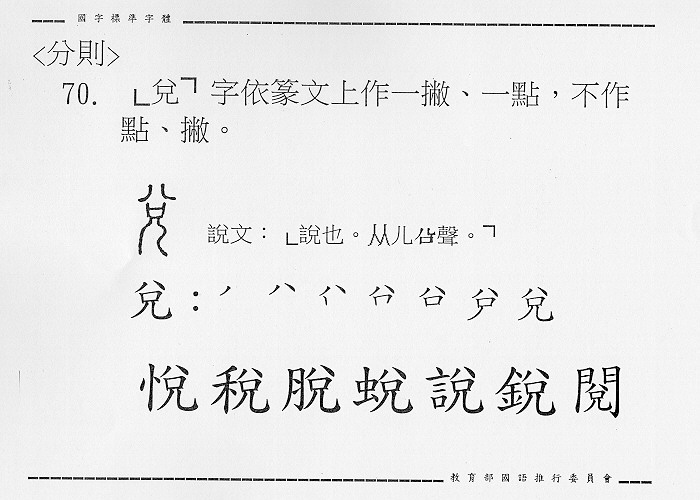 Hong Kong opted for 丷 as described in this document: http://input.foruto.com/ccc/gongbiu/dzijingbiu/doc/dzijingbiu_ji-pin.pdf of the 常用字字形表, explained in this Wikipedia article. This standardization is followed by the Hong Kong Education Bureau.

All other documents are listed under: http://input.foruto.com/ccc/gongbiu/dzijingbiu/index.htm 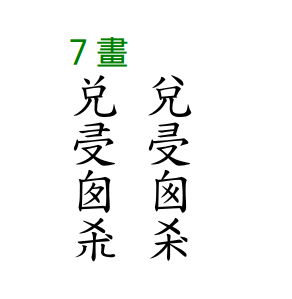 In this excerpt, the left is the standard, whereas the right is non-standard.

The image is from: https://www.zdic.net/hans/%E5%85%B3, a site that documents characters. From left to right [Mainland China, Taiwan, Hong Kong] (They used to also document characters used in Korean Hanja and Japanese Kanji). Also notice the dian (點) instead of na (捺) for the last stroke, used in the Taiwanese version

However, if a font isn't a Taiwanese font, it isn't limited to being a PRC font. In fact, Chinese characters are used in other East Asian countries/regions: Vietnam, Japan, Korea, Hong Kong, Macau, Singapore, etc.

And being in a certain physical region does not equate to a local font is used. Take the public transit service in Hong Kong, MTR, for an example, their Ming (serif) fonts are well known to be Japanese fonts, as indicated by the use of a vertical stroke (Japanese) in 亠 instead of a dian (HK).

As for the horizontal stroke in 八, it is most likely a stylistic decision of the font as I couldn't find relevant information online.

Probably a font thing. You need to install the correct font based on what variation of Chinese you're learning. You can google how to do that. cf https://blog.skritter.com/2015/05/dealing-with-font-issues-when-learning-chinese/