How would you describe the Chinese name 阮天文?

When a name is introduced such as 阮天文, native speakers might want to know what the characters are, so they can spell it. Does it make sense if you were to say 天气的天, 文化的文?

However, what would be a good description for 阮? And are there better ways to describe 天 and 文?

This surname, (Ruan in Mandarin), is of course equivalent to "Nguyen", a very common Vietnamese surname.

One way to describe it to Chinese speakers is, usually, to break it down into its constituent parts.

Start with the radical which is 阝, (fu4), and is known as "耳刀", and since this radical is on the left side of the character it is called 左耳刀.

Then say that 右手边, is 元, 元宵节的元 (元宵节 is the Chinese Lantern Festival)

EDIT 2 My wife (native speaker) gave me some more hints:

天气的天, 文化的文 is good (like the comment already states), but actually there is a system to describe strokes, that some Chinese people use.

It is called 笔画 bi3hua4, which is like an phonetic alphabet for strokes. This duckduckgo-image-search shows some of the charts that describe each stroke (as there are about 30 different strokes to describe)

I never learnt 笔画, so i cannot tell you how to describe your name in this system. You would have to name every stroke of every character. Because this takes too long Chinese people do the same as everyone would do: They mix both approaches.

In your case for example they could use 天气的天, 文化的文 and if the listener doesn't understand the 文 the speaker would describe that character with 笔画.

EDIT: The order the strokes are 'described' in would be the actual stroke order you would write that character in. 天 would be heng2 heng2 pie3 na4 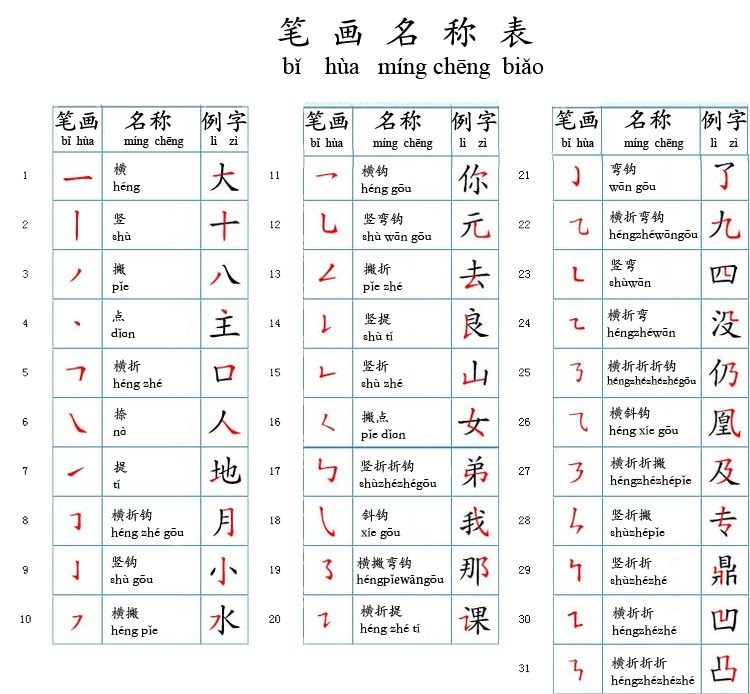 The sound of the name is beautiful.

As a Chinese, I hardly heard other Chinese whose family name is 阮.

So, first of all, I would guess this is a person from Vietnam. You can say:

When mentioning 天文, you would say either one of:

Not the answer you're looking for? Browse other questions tagged characters names or ask your own question.

2
Describing and meaning of the name 楚胜天

32
How do we choose the correct characters for a westerner name?
22
Why do native speakers often say a character has “no meaning”?
8
Can I use a rare character like 飂 in a name?
2
How do you address someone with their name in Chinese?
3
Must Japanese people's name be mapped to equivalent Chinese characters?
3
Help choosing a Chinese name among a few shortlisted ones
0
How do names translate between Mandarin and Cantonese?
1
How can I make a two-character Chinese girl's name, perhaps using 静?
2
Describing and meaning of the name 楚胜天