Which period in Chinese history produced the most chengyu?

There are tens of thousands of chengyu, many of them are historical in nature, whilst others are loaned from foreign sources such as Buddhism. Which period or dynasty in Chinese history produced the most though?

I suspect the earlier ones such as Warring States or Spring and Autumn periods to be the most productive but I have no sources to back that up.

I'll answer based on the article provided by @Stan. From what I can tell, it is a transcription from a 1999 article that appeared in 《语文建设》, the raw data of which came from 汉语成语考释词典 by 刘洁修, 1989. 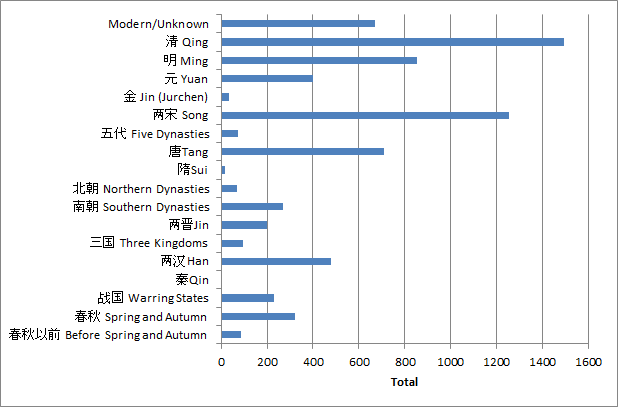 But these numbers aren't all directly comparable; some dynasties such as Qin only existed very briefly, others such as North/South dynasties co-existed. I've therefore combined some and produced a graph showing number of chengyu per year: 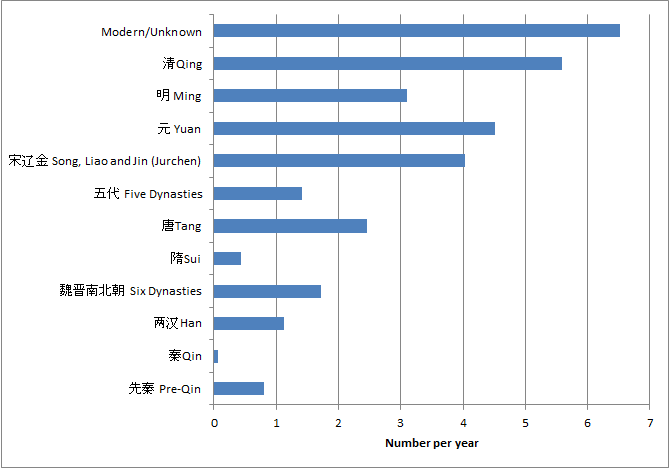 On determining the source of a chengyu

It's not easy determining the source of a chengyu, since like the rest of the language, it evolves and even changes meaning over time. The method used in these statistics is the first record of a chengyu in its modern form. This would necessarily bias the data towards more recent ages, even though those chengyu either had different forms earlier, or were modern chengyu based on older origins.

To use an example from the article, the chengyu 镜花水月 is recorded as appearing in Ming, however it had appearances earlier:

Therefore, the results may differ quite a lot depending on how you determine the origin of a chengyu.

chengyu Comes from people’s daily life. It’s difficult to distinguish which period produced the most chengyu. chengyu in Chinese is something like slang in English even in nowadays people make many chengyu for a example “不明觉厉” is a newborn chengyu translate into English is "although i don’t understand but still fell it’s very cool"！ my english is very poor maybe you can help me improve my English as return I can help you in Chinese. :)

Not the answer you're looking for? Browse other questions tagged history chengyu or ask your own question.

10
Geopolitical History of Simplified Chinese
5
Chinese Chengyu (Idiom): Refute somebody with his own argument
5
What's the Mandarin equivalent of the Hardcore History podcast?
5
What are the 1,500 chengyu for the 2015 chengyu convention
0
精益求精, how to properly interpret this classical Chinese chengyu?
2
What's distinguishes a chengyu (Chinese idiom) from a 4-character expression?
0
What are the HSK chengyu (idioms)?
2
Does the chengyu 话不投机 (huà bù tóu jī) mean "uncongenial speech"?
0
How do I use a chengyu (idiom) to describe a "one extreme to the other" kind of transformation?
2
Creation of Chinese characters throughout history?