Some characters look different handwritten and on the computer - how to learn the differences?

I've mainly been learning to read/write Chinese using computer based software as opposed to going to lessons etc.

However, I've realised that there is a small handfull of characters that look different handwritten and on the computer (and sometime there seems to be variations between fonts as well)

I've seen it written once, and the bottom looks very different (so much so that I didn't recognise the character!)

Is there a rule of thumb for variations between handwritten/computer fonts? Also, is it acceptable if I hand write characters in "computer form"? 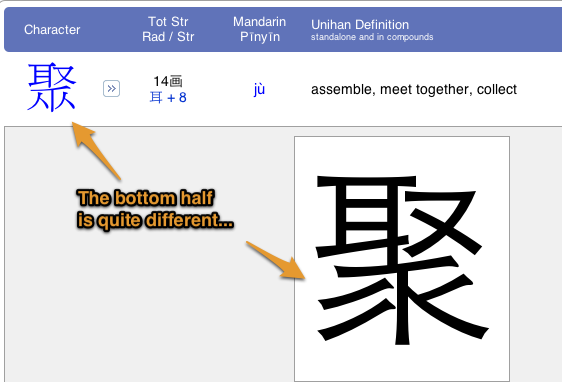 As you can see, those two characters (both 聚) seem quite different. If I remember correctly, the large black one is more similar to the handwritten one I saw (whereas the blue one is the one I usually see on the computer/mobile).

Note: I'm fairly sure this isn't a case of simplified vs traditional.

Ok, this is similar to another question about why certain people refer to 土豆 as peanuts and some as potato and some other people as something else.

And as per the language example above these traveled and certain simplifications were set in certain parts of the country so that there were regional differences. This in turn created sets of written characters used in different regions.

You can switch the character set your browser is using, but most pages now are served in Unicode.

I assume whatever encoding your browser has is not a standard Chinese font or Unicode. My Firefox browser detects the page as Unicode and it displays as follows:

In answer to your question in the comments above as to which one is the right one for you to use?

Your best bet in answering a question like this is checking a dictionary. That way you can be sure you have the right one. The other resource you can use for this is wiktionary http://en.wiktionary.org/wiki/%E8%81%9A

You can also see variants of characters at this site, including yours here: http://chardb.iis.sinica.edu.tw/variants.jsp?cid=19626 but this doesn't provide information if or where this is being used.

I believe this happens because your PC lacks some fonts to show characters correctly. In my firefox, both of them are the same, no problem. I want to show the difference caused by fonts here below:

The font we used are(from top to bottom) Arial,Century Gothic,DejaVu Serif,RomanD,Times New Roman,仿宋_GB2312,黑体,楷体_GB2312,宋体. Have you seen the big difference between fonts for English letters and font for Chinese characters(3 characters at the beginning and the last character)? Even with different fonts for Chinese characters, there are some little differences. Usually, we use "宋体","仿宋" in print. 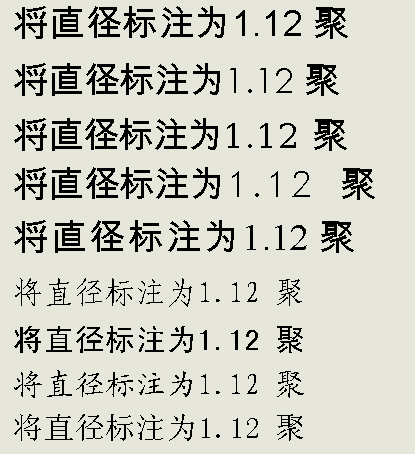 You're right that this isn't the case of the simplified/traditional distinction, but I don't think it's a matter of handwriting and printing either.

is the orthodox form (which was regarded as standard in the 1716 Kangxi dictionary) and is currently the standard form in mainland China (and also in Japan and Korea). As for

, ZDic says it is standard in Hong Kong and Taiwan.

In your picture, the one in blue is more traditional than the one in black (if that makes sense). As people will understand both forms of the character, it doesn’t really matter how you write it, as long as you are consistent with the way you do (not some simplified and some traditional). Most fonts should be the same (as the picture shows in Huang’s answer), but I suggest that you write your characters “computer-style” because pen and paper are soon to be extinct :( There are some big differences between similar characters in simplified and traditional Chinese, but you shouldn’t copy the traditional form if you are to write in simplified Chinese. Hope this answer helps you.

I use font type microsoft YaHei and the characters look very standard. I decided to change to another font because I had the same problem and I solved changing to this font.

Not the answer you're looking for? Browse other questions tagged character-identification handwriting or ask your own question.

22
How can I get better at reading handwriting?
3
Ancient forms of characters

17
Characters which have several different shapes
4
How to learn to read Chinese calligraphic paintings (and Chinese handwriting)?
7
Bottom component of 青 and 䏍
20
How to look up seal script characters?
0
Do characters like 司, 习, and 可 have different first strokes?
0
How to write Chinese fluently?
3
Handwritten shape of 「舟」 when it appears like 「月」 and the component form of 「肉」
4
Further information on calligraphy piece? (Characters identified: 斿于⿰坴丮)
1
I have a hard time reading handwritten characters, and was hoping for some help figuring out this script