I've been wanting to learn more about beijinghua and it's been more challenging than I expected.

I've heard that sh, ch, and zh, all turn to r in beijinghua. However, I've also heard some examples when it becomes h (非常 Fēicháng > Fēihang) or when it still remains as a voiceless sh (历史 Lìshǐ > Lìshh ) .

I've tried coming up with and summarising what I have found/heard below. Corrections would be greatly appreciated

What happens after 2 and 3?

I've heard that sh, ch, and zh, all turn to r in beijinghua

This is just an effect of speaking fast.

The groups zh, ch and sh in Beijing dialect, which Mandarin is based upon, are retroflex consonants.

The English r instead is a postalveolar consonant, and it's an approximant (meaning that your tongue doesn't hinder the air flow from your lungs).

If we look at the points of articulation of these sounds, we can see that postalveolars are articulated just a bit closer to the teeth than retroflexes. 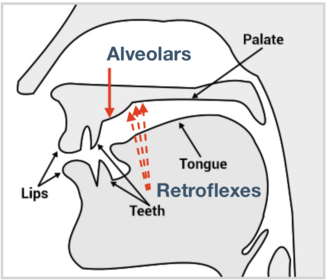 When you speak fast, you "don't have the time" to roll your tongue back enough and press it against the palate to pronounce proper retroflexes.

Therefore, the end result is that you have the next closest sound, which is an alveolar or postalveolar approximant, resembling the English r.

I don't suggest you summarise such rules. As a language learner, one of your goals is saying words clearly and accurately. In this way, receivers would completely understand it the first time you say sentences. Similar to New York and London, there are more outsiders living in Beijing than native speakers of Beijing dialect. Thus, Beijing dialect speakers tend to speak standard Putonghua.

If you want to learn swallow 吞音, your rate of speaking has to be as same as a native speaker. Otherwise, it sounds weird if you swallow phonemes when you speak slowly.

I don't think swallow rules are based on particular tones. All of them change to r not h. After changing, it becomes 轻声/natural tone.

Not the answer you're looking for? Browse other questions tagged pronunciation topolect or ask your own question.

0
“Why” in Beijing Dialect

5
What dialect could this be? (Southern China)
4
Are there online resources for learning the Chongqing dialect?
4
Pronouncing pinyin “c” in Shanxi dialect
11
How is the 儿 ending pronounced outside Beijing?
2
Learning resources for Minjiang dialect (岷江话)?
9
Questions on a Hakka song and its particular Hakka dialect
1
Is ㄙㄨㄚˋ (sua4) for the character 嘴 from another Chinese dialect or language?
2
List of Beijing and Standard Chinese vocabulary