足 is an ancient character meaning "foot". However, it also means "enough" or "sufficient", and this second definition is also very old. Consider this excerpt:

So why does 足 have these two very different meanings? Its oracle bone origin definitely suggests it means foot, so how did the "enough" definition come about?

Let the "foot" meaning of 足 be A, the "plenty, enough" meaning be B. Will discuss about this topic in the following two sections. 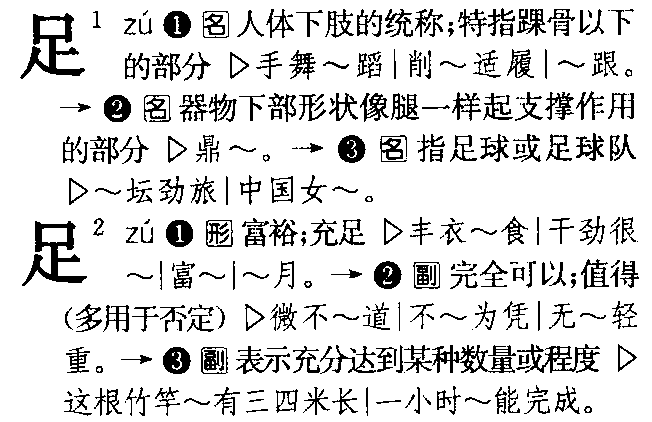 It places the "foot" meaning as 足 entry with a superscript 1, 足1, the "enough" meaning with superscript 2, 足2.

Figure 2. Explanation of the superscript.

The English translation of the above description can be:"Those whose form or pronunciation are the same but no relation between their meaning, basically will be in given different entries, with superscripts on their upper right corner. For example, '耳1' and '耳2', '安1', '安2' and '安3' "

Figure 3. The variants of 足.

The hint is given by this blog:

「另有充足、足夠、滿足等的意義。《現漢規範》認為充足等意義的“足”和下肢意義的“足”没有意義上的聯繫，只是形同而已。換句話說，“足”的充足意義並不是下肢意義的引伸。」which in English can be:"足 has another meaning: plenty of, enough, satisfied. 現代漢語規範詞典 treats this meaning as independent from the foot meaning, except that they happen to be the same in form. In other words, the 'enough' meaning does not stem from the 'foot' meaning." (Source)

Among many opinions, even the ancient sound is believed to be something similar to modern ju4 instead of zu2, which is also backed by 說文解字: 卽玉切, roughly ji + yu = ju.

and 王力古漢語字典 (Wang Li's Classical Chinese Dictionary (page 1350), (王力 is the name of a late renowned Chinese linguist, who advocated a categorized set of meanings for each Chinese characters in the dictionary, and suggested students to learn classical Chinese with the knowledge of Chinese history.) In the following three-piece scan of explanation, the "foot" meaning is put at first, next the "enough" meaning, third the "qualified" meaning. We can see that the "enough" meaning appears in some really ancient work 「詩經」, dating from the 11th to 7th centuries BC. 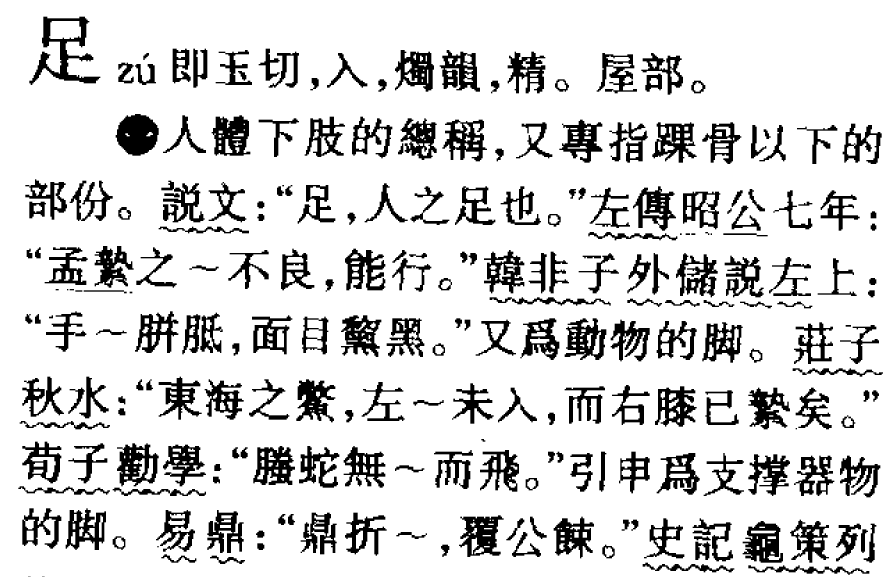 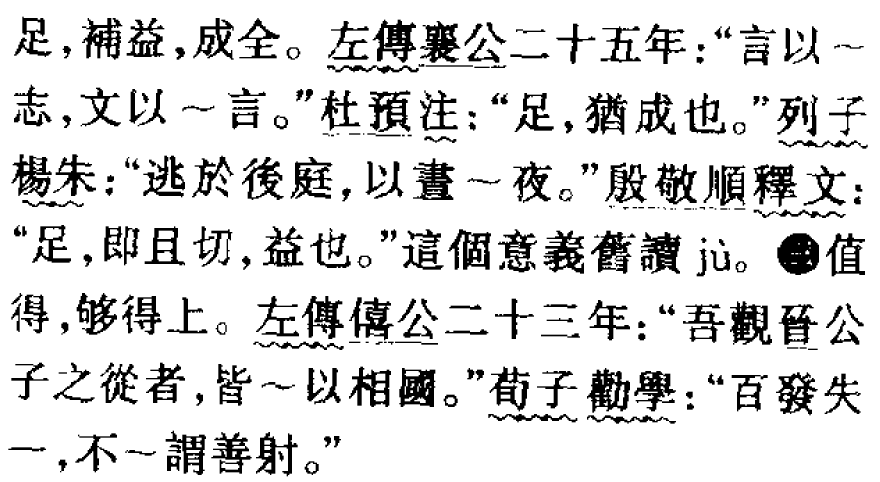 Whenever I see a character with two very different meanings (e.g. 重 heavy/again, 長 long/elder), I assume that it's a phonetic loan character (also called rebus). This is one of the five major types of Chinese characters (the Wikipedia article I linked to lists six, but I don't remember reading about the last case before, and from the sound of it it's so rare that we probably wouldn't classify it as a "major" type anyway).

Basically, a couple millennia ago, when the Hanzi were still in flux, if a scribe wanted to write a word for which he didn't know a character (or may not have been invented), he'd simply borrow an existing character that had the same sound as the word he wanted to write. I would venture that this is what happened with 足.

Although this is something we usually think of as happening a long time ago (as I alluded to above), it's actually still happening today. A few that come to mind:

Those all happen to be English words that have been adopted/adapted into Chinese, but I'm sure there are other new words that young Chinese invent and assign existing characters. However, this idea of taking a foreign word and using a Chinese character to represent it is very true to the term "rebus".

So why does 足 have these two very different meanings?

"足" when it's used as a noun, it means foot; while used as an adjective or adverb, it means "enough" (Just depends on where and how it's used).

This senario also occurs in English——"resume" (used as a verb, means continue to do). But when used as a noun, it means "papers for applying for a job".

足 and 尺 are obviously related, so MAYBE some meaning was transfer...... the concept could evolve: bit => bit more => enough