What is the etymologically correct character for the Min-Nan words for meat (bah)?

In both the teoswa and hokkien, the common word for meat is pronounced something like /baʔ/. I.e., it has a voiced initial stop (not like pinyin "b") and a glottal final.

This doesn't seem like the expected Southern Min reflex of 肉 from Middle Chinese (where it was pronounced like /ȵiuk̚/). I would at the very least expect the pronunciation to end in a final /k/ (since these dialects preserve final /k/). The initial could be an /n/ or something else, but it should follow from some systematic set of sound changes.

These all seem plausible as being regular derivations of the Middle Chinese. The final /k/ is present in all of them. The /ȵ/ initial either turned to /n/ (which in some dialects is merged with /l/) or it turns to h before front vowels. The latter is a rule Norman claims to hold for some dialects, and it seems to hold in Xiamen dialect for 耳 (/hi/).

The Austronesian hypothesis for the origin of Min Nan bah (as quoted on English Wiktionary, as of June 2020), comes from Deng Xiaohua's 1994 paper 〈南方漢語中的古南島語成分〉 ("Proto-Austronesian in Southern Chinese Languages"). I have attached an image here from a secondary source:

I see that the 16/17th century (Zhangzhou / Philippine) Hokkien-Spanish dictionaries are reported to have already had 肉 pronounced as bah (in their romanisation, bâ'). Hence this orthographic convention has had a relatively long time-depth compared to the other characters used for it.

What makes the connection harder is the lack of available cognates in other Min branches like Min Dong, Min Bei. If we believe Schuessler's link with 脢, which according to the 說文解字 means "back meat", that wouldn't necessarily rule out an Austronesian connection.

This is not really an answer - just some notes. Temporary answer: it's 訓讀 and 本字不明或缺乏.

has the following entry: 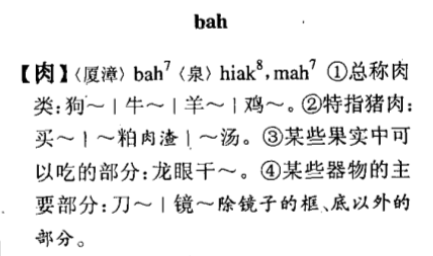 and also a bunch of related words starting with bah: 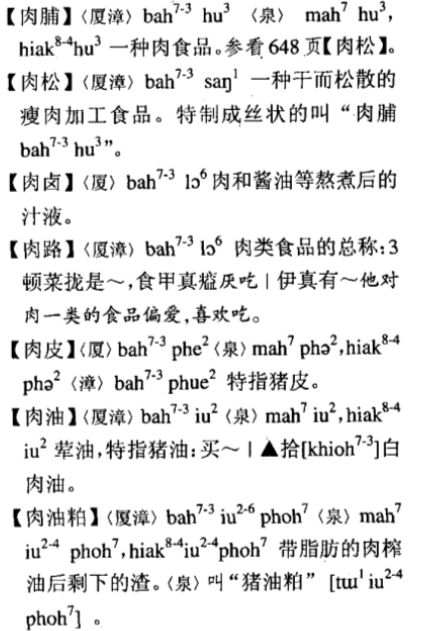 There are no other words with this pronunciation in the dictionary.

《臺灣閩南語推薦用字700字表》doesn't have any bah related entries.

《台灣閩南語常用詞辭典》 also only has one entry related to bah. 肉 is used to represent the pronunciation but they do note that it is:

Wikipedia has a page entitled: 閩南語漢字訓讀.

It mentions that it is "本字不明或缺乏."

Not the answer you're looking for? Browse other questions tagged etymology topolect hokkien or ask your own question.

3
Alternative name for moon cakes?
1
Etymologically Correct Character For The Sichuanese ‘niang’ Meaning "What"
2
Min Nan expressions: spelling, meaning and pronunciation?
1
What verb is the 捏 in the Min sentence 将你捏絚絚?
0
Why is inital /ŋ/ considered hick-ish?
10
Questions on a Hakka song and its particular Hakka dialect
4
What is the real etymology of "China"?
3
Pronunciation and etymology of 啱
4
Are there northern dialects which still preserve velars before front vowels?
4
Are there any multi-syllabic words in Chinese without a glottal stop?