What does 尔 really mean?

That character is the right part of 你 nu, which means you.

According to https://en.wiktionary.org/wiki/%E5%B0%94 it means you. It reads er

According to http://zhongwen.com/bushou.htm I saw this 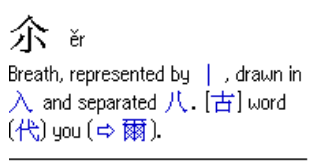 So the meaning is "breath"?

There are many resources which "decompose characters", but most of them do not give any insight as to how Chinese characters actually work in relation to the language, and looking at these resources is very counterproductive. The answer accepted here on the character decomposition of 「你」 is from one of the few resources which do give a correct idea of how characters work.

Someone can tell you "what 「尔」 really means" through its decomposition (in this case, decomposition produces only one component, as 「尔」 isn't made up from anything apart from itself),

「爾」 depicts a spiked weapon (similar to what is now written as 刺) adorned with decorative feathers. Some variants of the character left out the adornments, leading to the character 「尔」.

The meaning you for the character 「尔」 is a phonetic loan (rebus borrowing).

What does a Chinese character represent?

Chinese characters represent morphosyllables: that is, they represent

In colloquial terms, this means a Chinese character simultaneously represents meaning and sound, and the sound is (almost) always one syllable.

It pays to thoroughly understand what a morpheme is, so I'll paste Wikipedia's English examples of morphemes below:

Every morpheme can be classified as either free or bound. Since the categories are mutually exclusive, a given morpheme will belong to exactly one of them.

How do Chinese characters work?

How do character components hint at a morphosyllable? For each of the one or more components, they can hint at the morphosyllable in one of several ways. The three major ones are:

Components which employ the above morphosyllable hint methods are characters in their own right. However, it is generally not a good idea to further decompose character components into their own constituents; that is, perform recursive decomposition, because these further decomposed components either only peripherally hint at the morphosyllable, or do not hint at the moprhosyllable at all.

Correct and not-so-correct ways of decomposing characters can be shown through an example:

Even though the character 「鴻」 is written in the following stroke sequence, 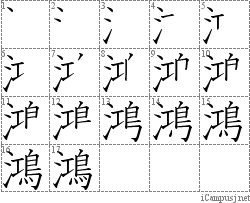 presenting the "decomposition" of 「鴻」 as the character's strokes, ㇔㇔㇀㇐㇑㇀㇒㇑㇕㇐㇐㇐㇆㇒㇔㇔㇔, does not tell you anything about the morphosyllable represented by 「鴻」, and asking whether any of these strokes have meaning is not productive.

Strokes, and the other commonly misunderstood radicals, do not have anything to do with the Chinese language. Chinese characters are not made up of strokes or radicals; they are made up of morphosyllable hints and (almost) nothing else.

In this context, 「尔」 is a character with one component, and good references will not break it down any further. Incorrect decompositions, like the one you've posted in the question*, will suggest very random things that have nothing to do with the meaning or sound of 「尔」, leading people down a time-wasting and misleading journey, and giving a very incorrect idea of what 「尔」 is and how characters work in general. Hopefully, by this stage it is better understood why the following questions and statements are not correct questions to ask and statements to make:

*This particular decomposition comes from the ancient dictionary Shuowen Jiezi.

If the concepts above are understood, then one might start to guess at what a proper description of 「尔」 should or shouldn't look like,

「尔」 contains one component, which is a morphosyllable hint of type 2: Sound hint (see the top of this answer for the glyph origins and explanation)

, and what role it plays in the character 「你」.

「你」 is cognate to 「尔」, and they once represented the same word long ago.

Definition: you; that, those; final particle

The character decomposition of 尔 as found on Zhongwen (as shown on your picture) consists of 3 parts:

The final line shows the actual definition paired of part of speech in parentheses (here: (代) = pronoun) and meaning (here: you).

21
Is there a site that can split characters into radicals?
2
How do I understand Ni (you) character correctly?
0
Radical 163 Vs 170
2
What does 亅 mean?
2
Besides the radical, what meaning does the rest of a Chinese character have (especially when it was originally created)?
1
What's the meaning of the hat like character on top of 尔