On a HSK6 test, why is 社会稳定，人民生活水平显著提高，这一切都给人留下了深刻的印象 the incorrect sentence?

In a YouTube video a native Chinese speaker answers questions on the HSK-6 test. He gets one wrong: to identify which "has grammatical errors or uses wrong words" below:

He thought they were all correct, so he chose D, but the correct answer is C.

Question: What is wrong with C?

In all seriousness, as a college student majoring in Chinese linguistics & a native speaker, all of the above explanations don't make sense to me. I think there’s nothing grammatically wrong with this sentence, which means it is simply a bad question.

人民生活水平 is a common expression in Chinese, and the usage of 人民 here is correct. This sentence, however, does not omit any grammatical particles (的) either, since it's feasible to use a sentence to serve as a subject. "國語的推行需要大家的努力"(literally The implementation of the Mandarin language requires the efforts of all) and "在全社會推行國語需要大家的努力" are both grammatically correct.

Please pay attention to this: "一切 and 所有 may not have a scope." This means that it's fine even if it has a scope. E.g. When preparing for a dinner, people often say "可口的蛋糕、浪漫的蠟燭，一切都已準備好了。" Nevertheless, to some extent it's also an abstract usage since the things prepared includes but not limited to the two preparations (cakes and candles) previously mentioned.

This is exactly the point. There's no strict regulations on the usage of "both"/"all" in Chinese. Some might say one way is better than the other, but basically it's due to the impact of English grammar. It is grammatically correct to use "一切" to address two things only, though it might not meet everyone's sense of language.

In summary, I see no reason to blame that dude in the video. This is merely a bad question.

I vaguely recall coming across something like this in Liang Hongyan's very detailed book on HSK 6 level grammar. Her explanation, if I remember correctly, is that, contrary to English usage, you can't 提高 a 水平. You have to use some other word to mean "raise" when you're talking about a level. But even then, I doubt most Chinese would agree or care.

This material offers some insight (translation mine): 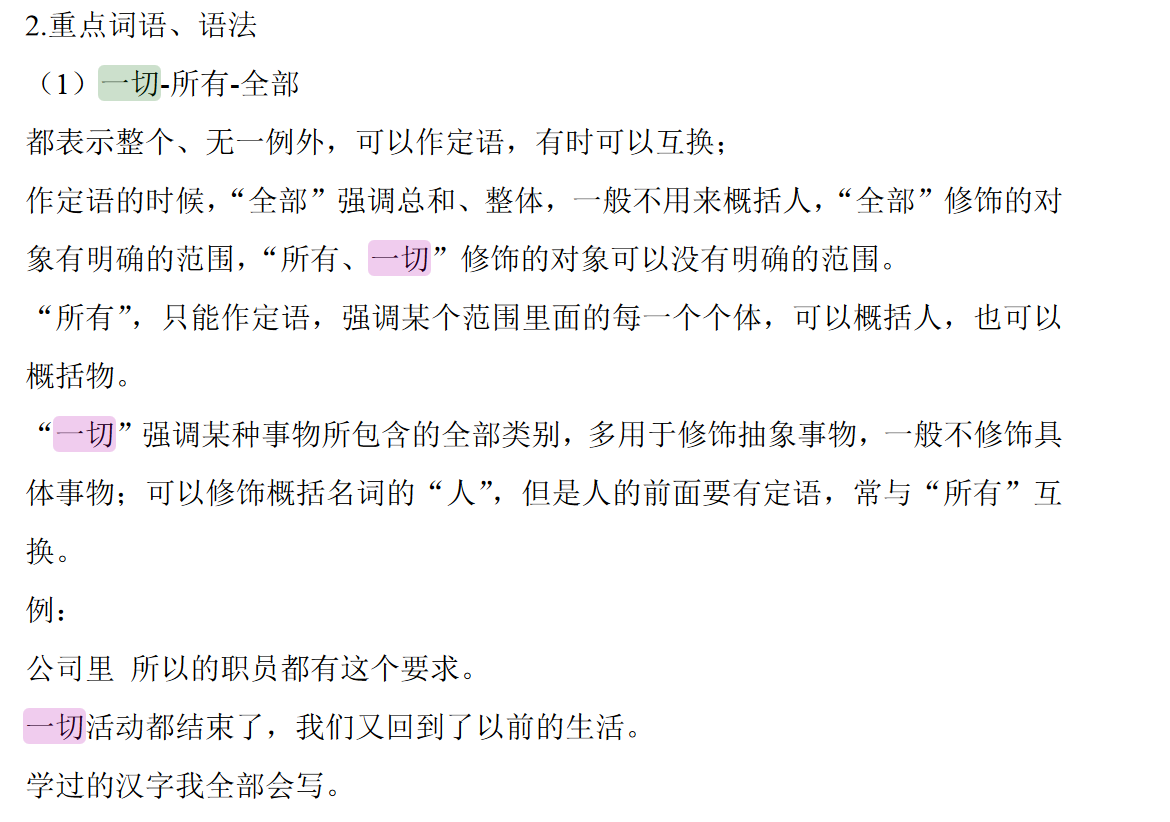 一切-所有-全部 All are used to express "whole", "no exceptions". Can be used as attributive adjunct, sometimes interchangeable.

When used as attributive adjunct, 全部 emphasizes on "collective" and "whole", and usually not on people. The subject of 全部 must have a specific scope. 一切 and 所有 may not have a scope.

所有 can only be used as attributive adjunct, emphasizing on "every single individual" within the scope. It can be used on people or objects.

一切 emphasizes all the categories that are included within a subject (my understanding is "一切 emphasizes on all the subject covered by a certain scope"). It is usually used on abstract subject and not concrete ones. It could be used to describe people in the general term, but must have attributive adjunct before it. It is often interchangeable with 所有.

In this way, 一切 is similar to a universal quantification in math:

6
Are HSK6 questions 51 through 60 (语病) so difficult that it's reasonable to just guess?

4
Why is it incorrect to say (Someone) 想要了一 (Something)?
2
Why is 挺 used in the following sentence?
2
Why must 到 be chosen in the following sentence?
3
Why is 性 in the sentence 你不能吃凉性的水果?
0
How are my 用词造句 ("use the word to make a sentence") sentences using 幸福 and 俩?
1
Why does the second sentence use 个?
6
Are HSK6 questions 51 through 60 (语病) so difficult that it's reasonable to just guess?
4
What are the answers to the HSK6 语病 ("faulty wording") questions on the 22 publicly available HSK6 exams?
1
Placement of 都 in a sentence with 每
2
How did I go in my mock HSK6 exam faulty wording section?