Does Chinese require more context to avoid ambiguities than English?

After some time learning Chinese, I feel Chinese language is more ambiguous than English or Spanish, in the sense that a single sentence without some context can easily have multiple distinct meanings, for example, when there are characters with different meanings such as 想 with think/want/miss or 让 with let/ask (and the situation can be even worse in an oral conversation with homophone characters).

Question: I would like to hear what more advanced learners or Chinese natives think about this appreciation. In particular, is it true Chinese is in general more ambiguous than English? So for the same sentence in Chinese than in English, do you usually need to provide more context in order to transmit a message?

One type of ambiguity is given by the isolating nature of the language (i.e. absence of inflection) combined with a high frequency of homophones.

Which means if you hear me saying bei1 ju4, am I talking about a tragedy 悲剧 or glassware 杯具？This requires context to disambiguate.

You might think: "well that's easy to disambiguate". Okay, what about you hear me saying: 我的 ji4 yi4 很差! Is it 记忆 (memory) or 技艺 (skill)?!

As you can see, this ambiguity exists in speech only. In writing, you readily identify what I'm talking about by just looking at the actual characters.

Another type of ambiguity is given by the lack of verb tenses, which makes it harder to figure out if someone is talking about a past, present or future event. This usually requires time indicators (那时候，今天，明天，去年，当时), particles or auxiliaries (过，了，将，要), or a larger frame of reference, e.g. a previous sentence.

But it's possible to argue, and it's a valid argument in my opinion, that this kind of ambiguity practically exists only when you compare Chinese to a language with different grammatical features, and not in absolute. As your proficiency level increases, you simply get used to how the language flows.

And at that point the comparison with English is maybe a little moot: the two languages are just 不一样。

blackgreen has already mentioned ambiguity in speech. But I disagree with the notion that ambiguity in tense does not actually exist in Chinese. It does, and nothing anyone can say can eliminate it. Even if you are perfectly fluent in Chinese, it simply does not have the capability to systematically convey the same spectrum of tenses that English can.

For example, consider the following:

In Chinese, you would likely need the wider context to tell you even whether it is in the past, present or future, but even the context may not tell you clearly which exact tense it is. For example, you might think that you can say "I had read the book" using "我已读了那本书" (assuming it is clear from the context that this is in the past). Sure, but can you easily distinguish between "I have been reading the book" and "I am reading the book"? In practice, the context will tell you the temporal order of events, but in Chinese we often do not convey specific information about the grammatical aspect, whereas English grammar requires specifying that.

In general, I believe most of the difference in precision between English and Chinese stems from the fact that English has a significantly more complicated grammar than Chinese, which enables higher precision at the cost of being more rigid.

Vocabulary wise, there may not be much difference because in any natural language many common verbs and nouns have multiple meanings and require the context to disambiguate. For instance, "想" does mean "think" or "think of", where "think of" can be used to convey "miss", and you can be more precise by choosing "想念". I don't know why you think "让" means "ask", because it doesn't. (If it does in some dialect, it is like people incorrectly writing "would of" instead of "would have" and "their" instead of "they're" due to hearing them pronounced similarly but not having learnt correct English.)

After some reflection, I believe my question is not completely well-posed. I think we could only compare the ambiguity in languages if they were not able to transmit all the information; but that is not the case in languages used in communication. So, as pointed in other answers, even though there exist some structures in Chinese that isolated might be "ambiguous"; they are able to transmit the desired information with some additional content. This additional content can be analogous, for example, to that of the verb tense in English.

On the other hand, a more sensible measure for comparing the languages is the information transmitted per syllable in a speech. Indeed, this was studied in the article Coupé, Christophe, et al. "Different languages, similar encoding efficiency: Comparable information rates across the human communicative niche." Science advances 5.9 (2019): eaaw2594. Although by all means not a definitive study (they only compared 15 paragraphs texts), they obtained similar but slightly smaller values in Chinese Mandarin (6.96 bits/ syllable) than in English (7.09 bits/ syllable). Furthermore, they studied the Speech Rate (the speed at which syllables are spoken); even though this varies greatly with the speaker, on average they found a slightly lower Speech Rate in Chinese Mandarin (5.9 +- 0.6 syllables/second) than in English (6.3 +- 0.7 syllables/second). Overall, the Information Rate (the velocity at which information content is transmitted) is quite similar but again, on average, slightly lower for Mandarin (41 +- 4 bits/ second) than English (45 +- 5 bits/ second). Indeed, in the article they argue this rate is very similar across all languages and might be the most efficient rate: a higher value could be difficult to process, a slower value could be difficult to remember.

Below we have the Speech Rate and Information Rate for several languages (thanks to the Creative Commons Attribution-NonCommercial license of the article): 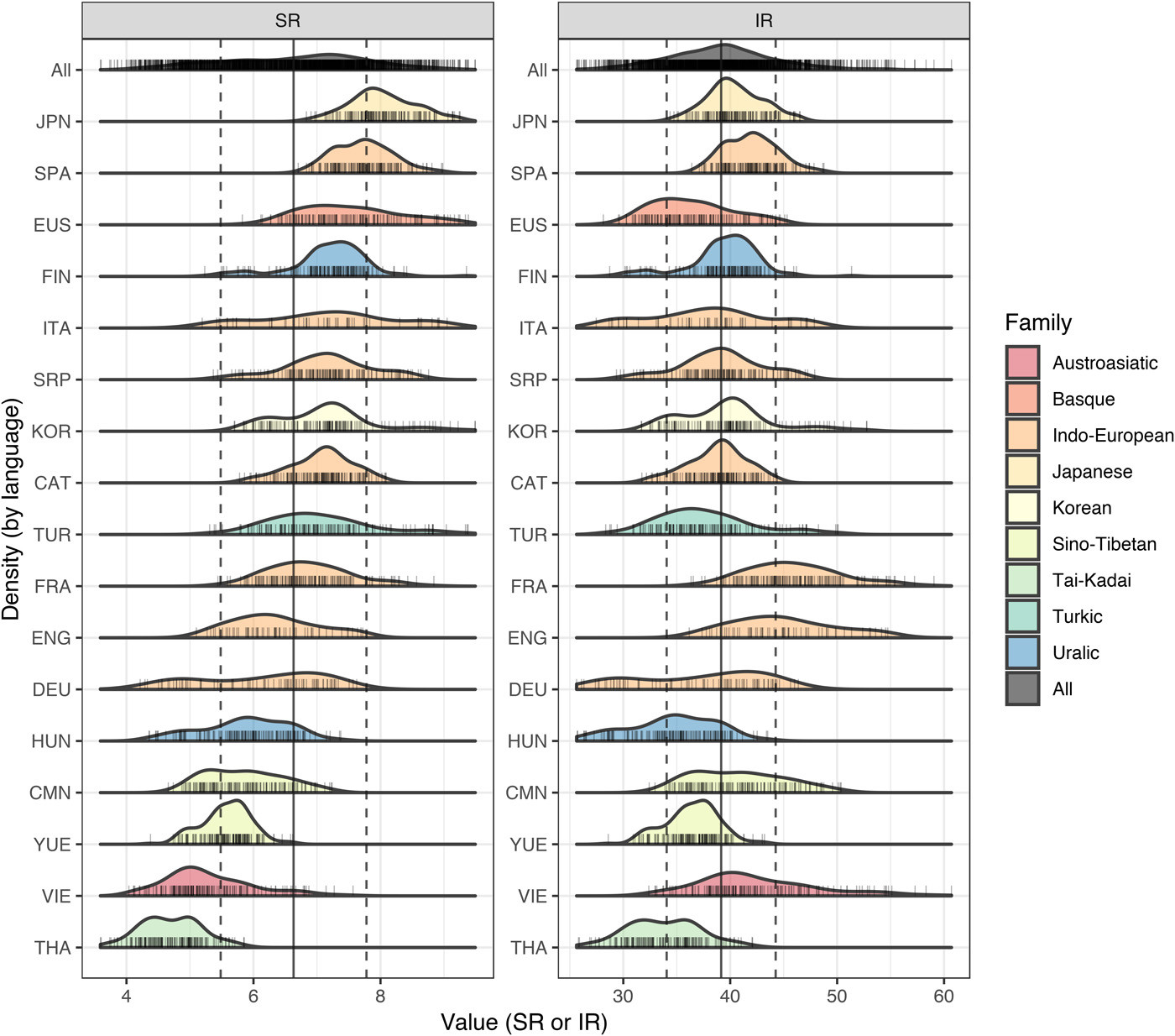 Not the answer you're looking for? Browse other questions tagged translation mandarin or ask your own question.

11
Why does Mandarin Chinese have a smaller inventory of unique syllables?
0
Difference between 问 and 让 "to ask"

8
What are the rules of writing a 对联 (chinese couplet)?
8
What is an idiomatic way to say "This is not good" in Mandarin?
3
Benefits of Learning a Chinese Dialect in Addition to Standardized Mandarin
2
Help deconstructing parts of 點唱機 - 按年份後，當年的流行曲就出來了，一按即點
8
"I will," "I can," "I will (probably)" A fundamental problem with 會
2
Translation of "fraction" in a sentence
0
If Pinyin (or Other Romanization) can be Translated Back into Chinese Characters
2
What is the Chinese equivalent of "time to [A]"?
3
Translate "Questions you cannot answer are usually far better for you than answers you cannot question."
1
The Etymology of the word 有的