What are the most common Mandarin words for each pinyin syllable?

I've been practicing my pronunciation by reciting the different pinyin syllables described in my book.

My book lists some examples of common words for some syllables. I was wondering where I could find a more complete list of words for each phonetic? 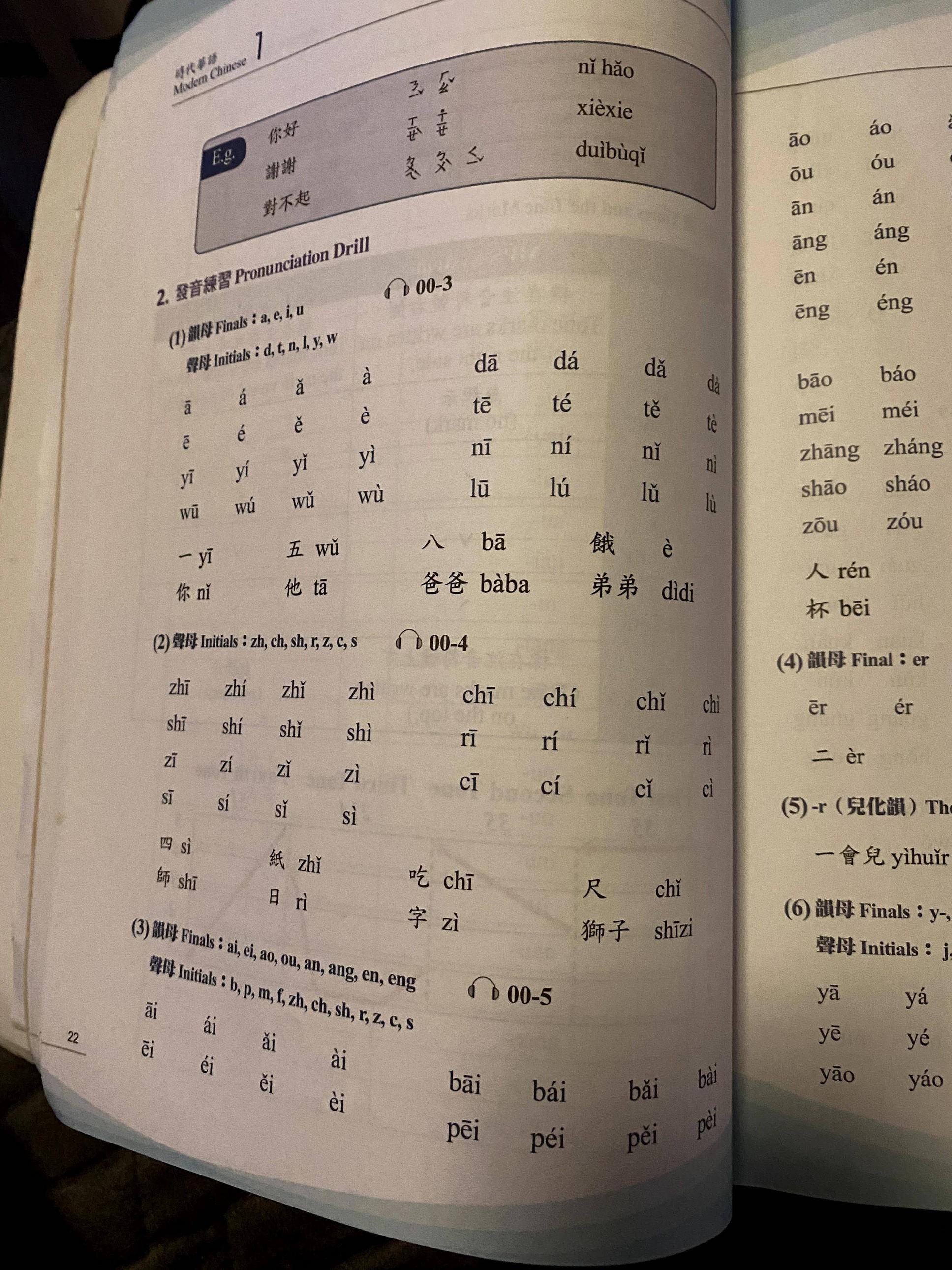 After a bit of searching I could not find a proper resource to answer this question, so I started compiling compiled a comprehensive list by hand.

Since you say that the most common character for each initial+final+tone combination is enough for you, the answer is rather easy: we can cross-reference the pinyin and tone combinations with a list of character frequency in Chinese.

How to read this table:

I just came across this Chinese Pinyin Table in archchinese.com, which might be able to help you: 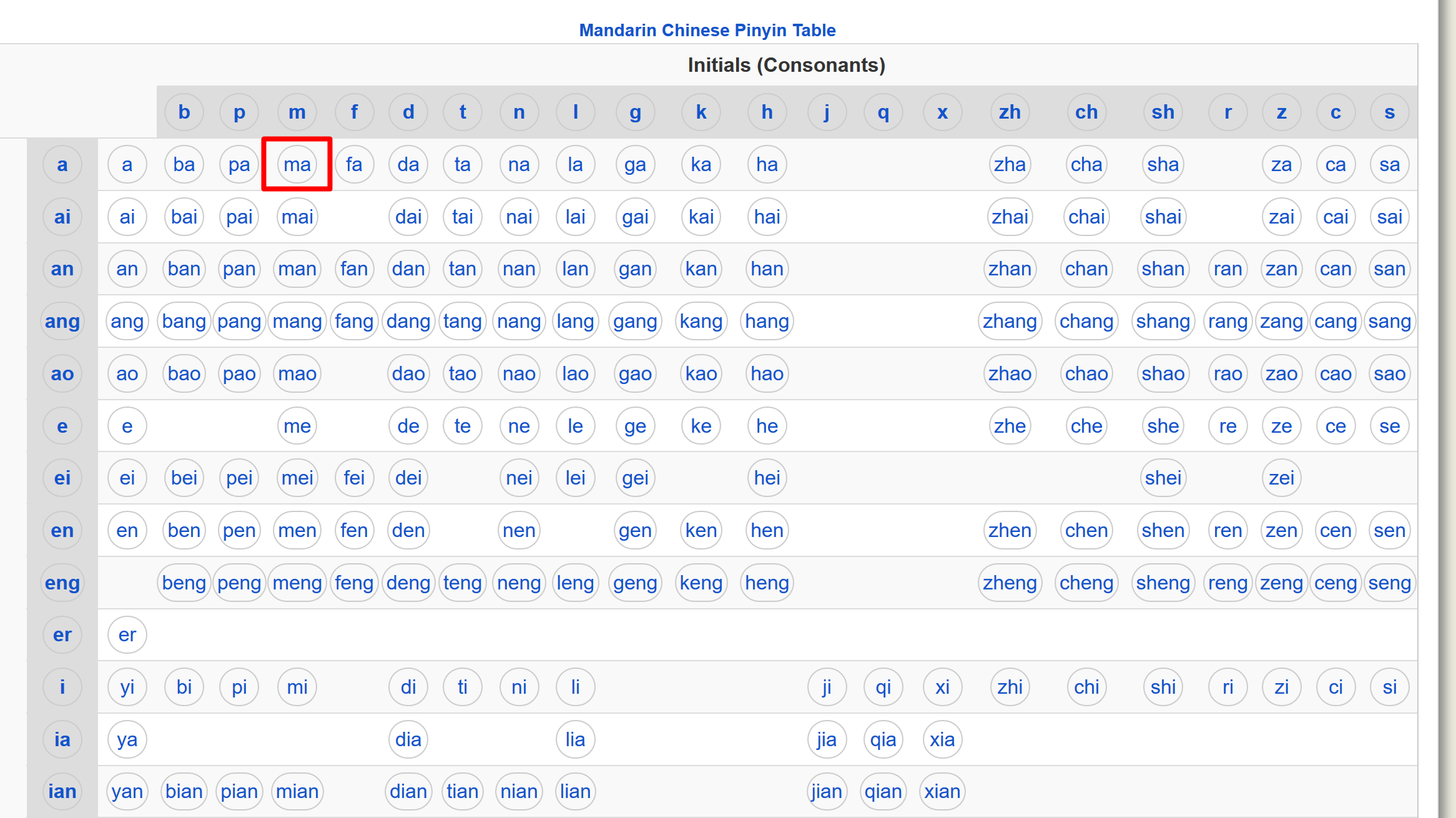 Pressing on any pinyin combination, for example ma (in red), and selecting [Characters...]: 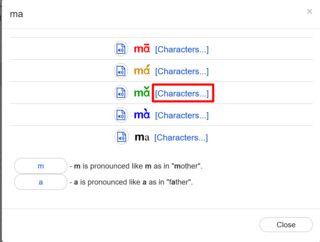 We arrive to a page where, at the top, we have the characters corresponding to this pinyin syllable (this is the information @blackgreen gave on his answer, though probably is not ordered by the frequency in usage). Moreover, pressing on Details..., we can see their meanings: 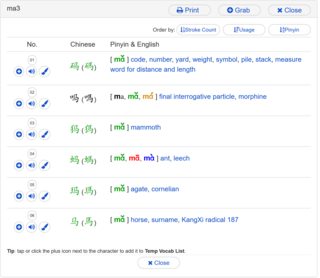 If you are interested in words containing these characters, you can find them below: 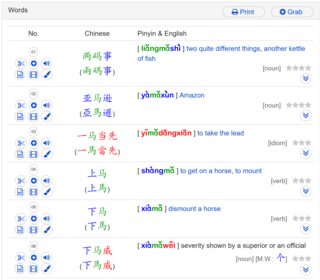 As well as example sentences using these words: 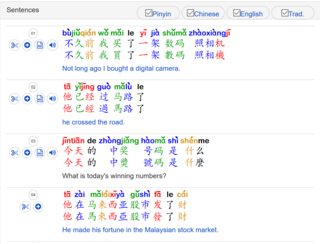 You could check also the Chinese Yabla dictionary or the Pleco dictionary (for the mobile phone). Searching for the pinyin syllable gives results for common characters.

Blackgreen's answer is an excellent resource, but I would also like to mention that the ABC dictionary is a valuable alternative that gives even more (albeit in an uncompiled format): it also gives the 2nd, 3rd, 4th etc most common character, for a given pronunciation (pinyin, including the tone).

You can buy a paper copy (probably - I haven't tried) or add it to the Pleco app (as a paid add-on).

It's very convenient when used from inside Pleco. Here is an example giving its listing of the top characters for jī: 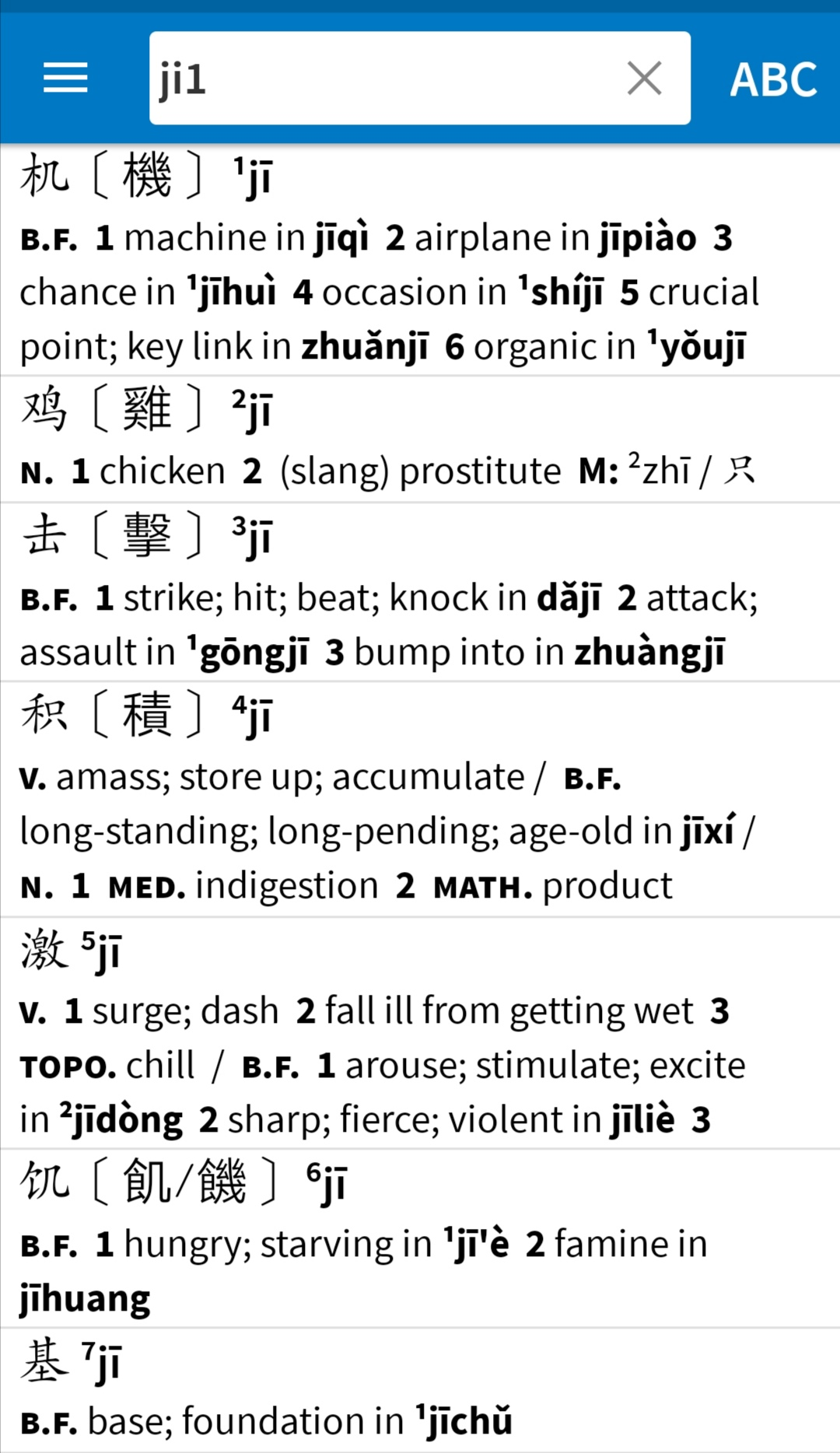 The raised digits, to the left of the pinyin (jī here), indicate ABC's assessment of the order of frequency (of usage).

In Pleco you can also leave out the tone and then get a list of all the pronunciations, also sorted by frequency. NB: in the next screenshot the star "*" which is next to "几 / jǐ" means that ABC states that "几 / jǐ" is the most commonly encountered, among all pairs (characters + reading) that are ji (of any tone). 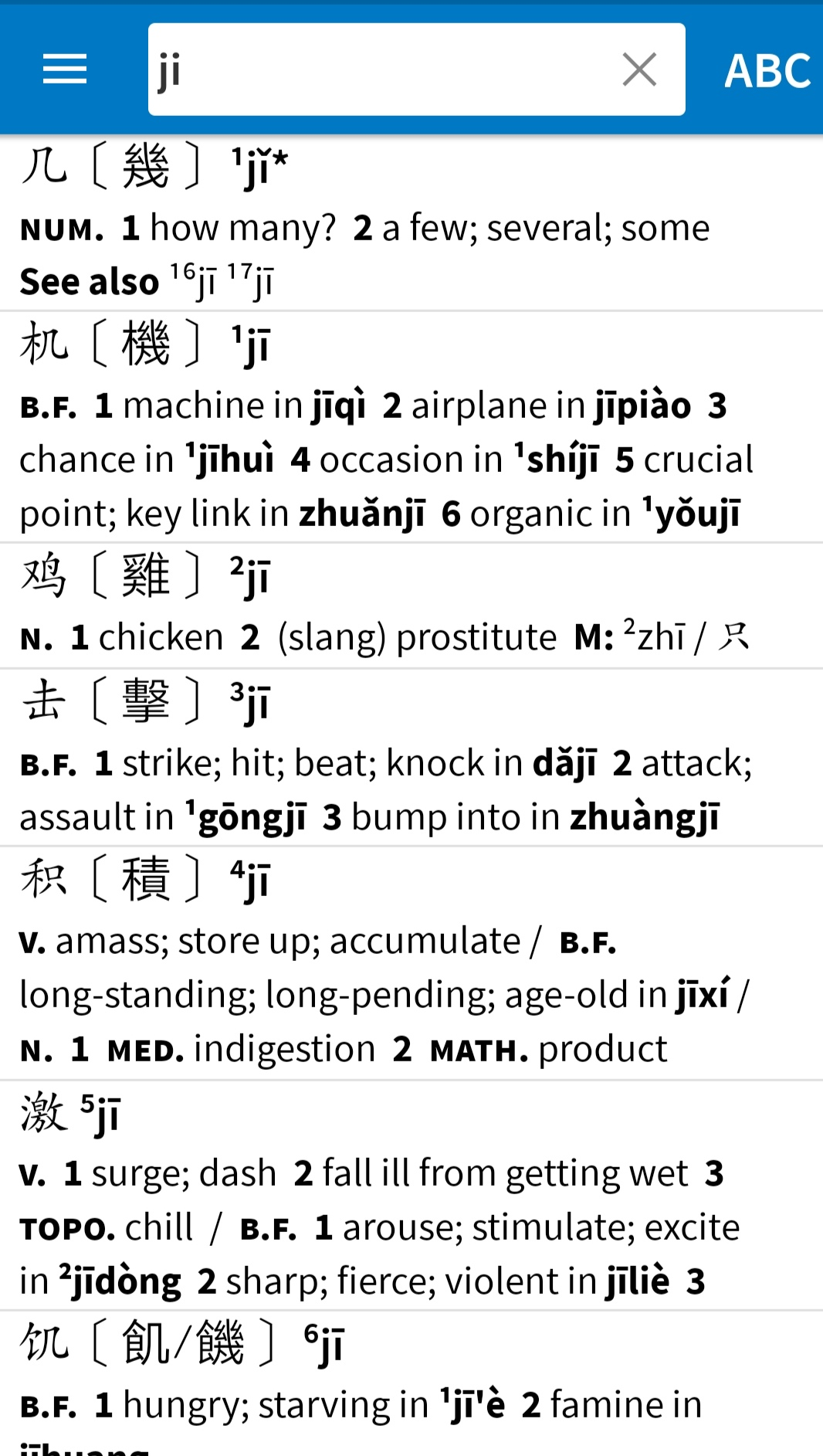 Here is some further information about it - a direct quote from the ABC dictionary (found online here):

For entries with identical spelling, including tones, arrangement is by order of frequency, indicated by a raised number before the transcription, a device adapted from Western lexicographic practice to distinguish homonyms. In the case of monosyllabic entries, our frequency order is based largely on Xiàndài Hànyǔ Pínlǜ Cídiǎn. In the case of entries of more than one syllable, we have also made use of Zhōngwén Shūmiànyǔ Pínlǜ Cídiǎn. For entries not found in either work, we have made subjective judgments of relative frequency. For entries that are homographic if tones are disregarded, the item of highest frequency is indicated by an asterisk following the transcription. For example:

(For the characters corresponding to these transcriptions, see the main body of the dictionary.)

Frequency information, while useful also for students, is provided chiefly as an aid to determine the default items in computer usage. Our unique combination of letters, tone marks, and raised numbers provides a simple and distinctive one-to-one correspondence between transcription and character( s) that is intended to facilitate computerized handling of the entries.

Finally, it's almost completely off-topic, but here's another plug! I also really like ABC because I find it really useful how it gives parts of speech, particularly for which readings/meanings are what it calls "bound forms" - an exceedingly useful notion for students IMO. Another quote, about bound forms:

Exhibiting a second level of boundness are those characters which do have meaning of their own, and often carry this meaning into many different compound words, but which do not occur independently as free words in standard modern Chinese (though they may be free words in classical Chinese or in very formal written styles of the language). Examples are nǚ 女 'female' in nǚrén 'woman', nǚháizi 'girl', nǚde 'woman, female', and fùnǚ 'woman, women'; and ²shēng 生 'student' in xuéshēng 'student', nánshēng 'male student', nǚshēng 'female student', and zhàoshēng 'recruit students'. Many characters are bound in some meanings but free in others. For example, ²shēng 生, in addition to being bound in the meaning of 'student', is also bound in its meaning of 'life', as in shēnghuó 'life, livelihood' and shēngsǐ 'life and death'. But in the meaning 'to give birth' or 'to be born' it is a free word, a verb. We label such characters B.F., for 'bound form', when they occur only in compound words; and those that are bound in some meanings and free in others are labeled accordingly in the several sub-definitions within their entries.

These categorizations should be valuable to users of the dictionary in at least two ways. Like the other entry labels, N., V., S.V., etc., they enhance the semantic definition of a term, providing grammatical information to improve the user's understanding of how the terms are used. And beyond that, they serve the very practical purpose of a caution sign, indicating that one cannot turn the Chinese-to-English definitional equivalents around and assume that a given English concept is expressed in Chinese by the single character in question. For example, one cannot say that the Chinese word for woman is nǚ or the word for student is shēng, because these are not "words" in Chinese but bound morphemes, or "parts" of words.

Having said that I'm not convinced ABC is 100% reliable for everything. Also, other dictionaries also have their merits and are better suited for other purposes. I like to use ABC alongside other dictionaries inside Pleco (such as 现代规范词典, CC-CEDICT, ...)

147
Resources for learning Mandarin Chinese
5
Where can I find a full list of combinations of sounds and tones used in Chinese?

5
Looking for Pinyin standards
12
Pinyin tones pronunciation cheat sheet
5
Is 去 (qù) pronunced /tɕʰu/ or /tɕʰy/?
6
What difference(s) does it make to use the citation tone instead of the neutral tone, for the tail character in these words?
3
The max number of characters that map to a single pronunciation
2
Examples of correct and incorrect pinyin
3
Character substitution in Microsoft Pinyin IME for typing 「」(直引号)
0
Without using the help of Pinyin
3
Pronouncing pinyin "ing" (bopomofoㄧㄥ ) as /iŋ/ or /jəŋ/ e.g. in 冰