How to solve the final round of 2020 China National Linguistics Olympiad? [closed]

Ask Question
Asked 8 months ago
Active 8 months ago
Viewed 367 times
4
Closed. This question is off-topic. It is not currently accepting answers.

Want to improve this question? Update the question so it's on-topic for Chinese Language Stack Exchange.

Puzzles of the final round of 2020 China National Linguistics Olympiad. It’s Tangut! (The question is: please match the Tangut words on the left with the meanings on the right.) 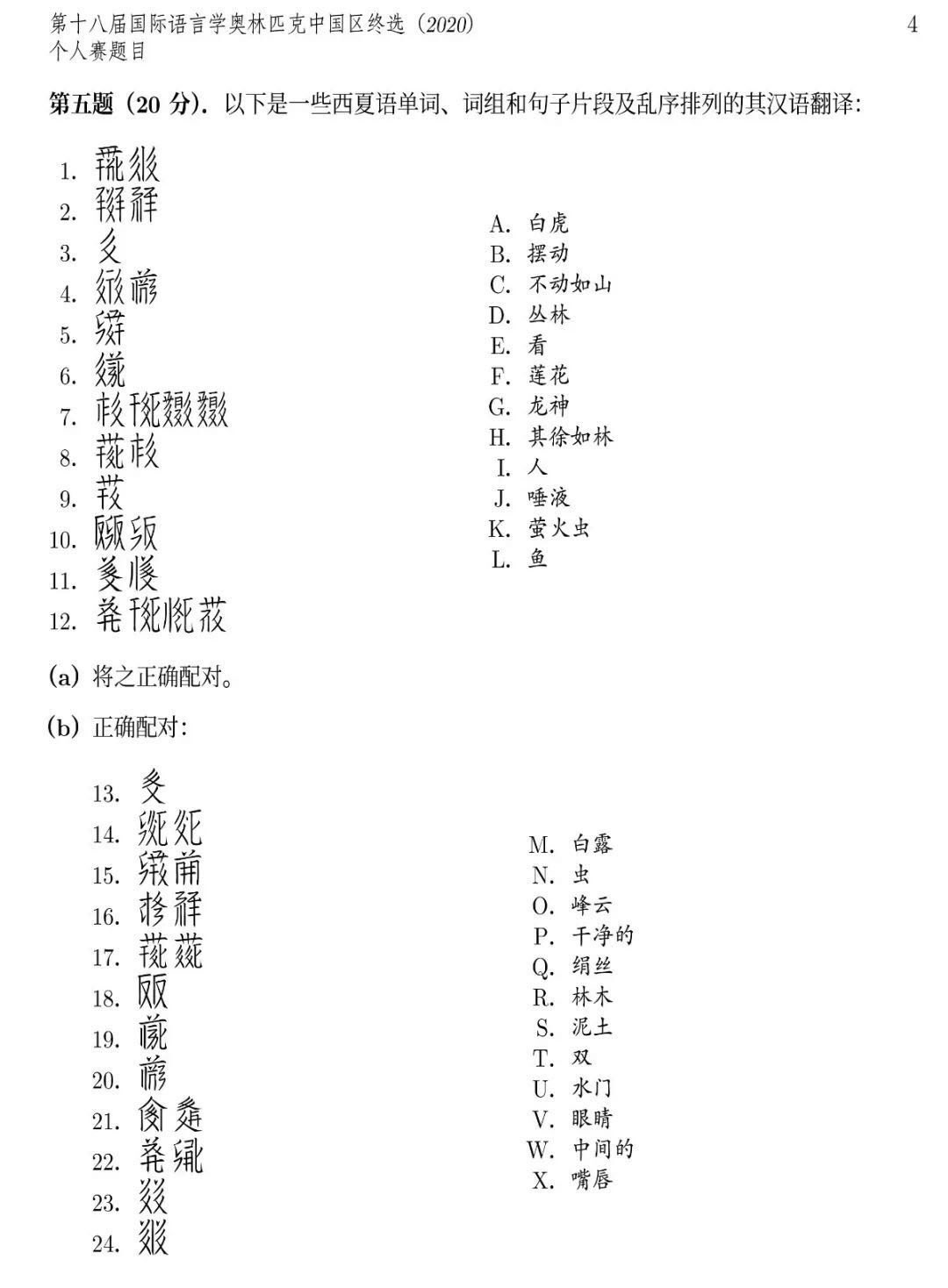 Any ideas how to solve this?

(This is a work in progress)

This question is a test of the ability to apply linguistics and Chinese character principles to solve the matching puzzle. I will assume the following, in order of most to least certain:

Now, I'll present how I would solve the puzzle.

Each one of these corresponds to one of

As an analogy, Chinese 「的」 or 「之」 works in the opposite direction of English of.

- The first character in (7) has a semantic field of (many) plants, trees;

- The first character in (12) has a semantic field of mountain.

The second character in (22) is the Tangut equivalent of 「雲」.

This is the character for cloud, and we can see that the left hand side component occurs in the following phrases:

The Chinese phrases which may correspond to sky, weather, sun are:

The Chinese phrases which may correspond to water are:

so we can deduce that

Here are a few tools that might be of help:

If you're looking for a font that supports Tangut you can try:

For a quick overview of Tangut characters and their structure we can look at a few excerpts from Tangut Language and Manuscripts: An Introduction by Jinbo Shi. The book contains a section entitled: Structure and Features of the Tangut Script. On page 150 we can see the following introduction:

Some of the strongly representative ‘radicals’ are extracted from a series of characters which share a common shape and a similar meaning. For example, characters such as 𗅒 (short), 𗅐 (truthful), 𗅴 (covetous) all contain an element identical in shape, as well as a sense of 𗅋 (not): 𗅋 and 𘙲 (long) makes 𗅒 (short); 𗅋 and 𘗪 (deceptive) makes 𗅐 (truthful); 𗅋 and 𗣷 (sufficient, satisfied) make 𗅴 (covetous). Likewise, 𗚃 (peach), 𗝹 (elm), 𗛁 (chestnut), 𗚍 (rafter), 𗚋 (twig, branch), 𗟇 (tea), 𗛚 (boat), 𗟔 (carriage) all feature a common shape and a shared sense of 𗝠 (wood, tree). In yet another example, 𘟞 (knife), 𘖟 (spear), 𘖧 (needle), 𘖜 (lock), 𘖯 (pot), 𘟪 (iron), 𘗁 (steel), 𘗍 (copper) and many other characters share the common shape of 𘨝, which have to do with metals. So, it is anything but surprising that the forms of 𘠐, 𘡪 and 𘨝 should come to be recognized as radicals representing the ideas of “not” “wood” and “metal,” and thus used to analyze and infer the meanings of characters in which they are featured.

This method is effective under certain conditions, but it is only one aspect, and not even the most critical aspect of the formation of Tangut characters. A thorough study of the Tangut script reveals the following two noteworthy phenomena.

On page 147 there is a chart showing the composition of Tangut characters: 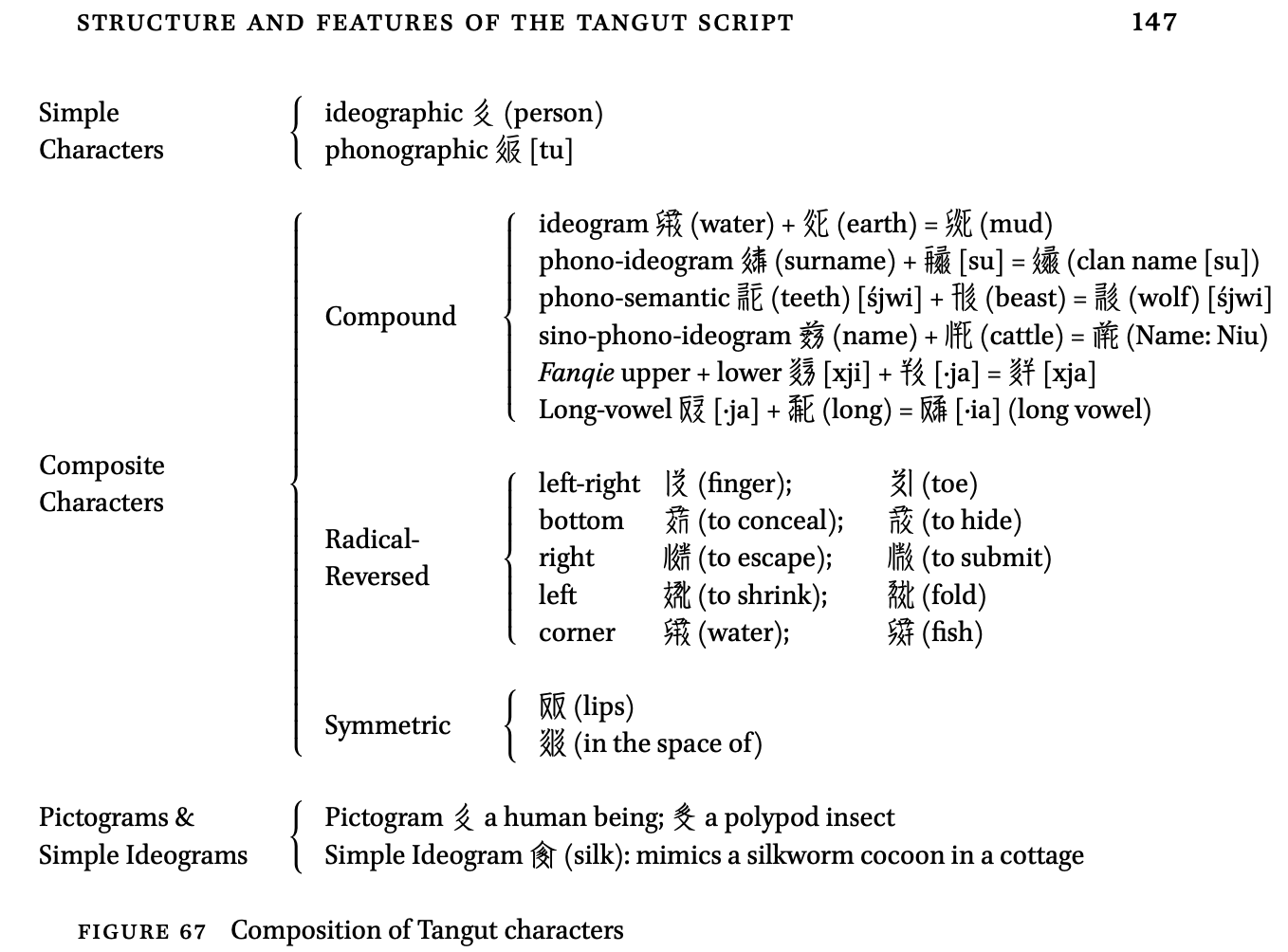 Compounds are composed of two, three and even four constituent characters. But usually, only one radical or major part (left, right, top, bottom, middle, etc.) is taken from each character to form a new one. According to the Tangut book of rimes, the Precious Rimes of the Sea of Characters, there are more than sixty ways of forming compounds, which can be further divided into compound ideograms, phonetic-ideographic compounds, phono-semantic compounds, sino-phono-ideograms, fanqie compounds and diphthong compounds.

Not the answer you're looking for? Browse other questions tagged puzzle or ask your own question.