How many non-native speakers of Chinese are there?

I have been reading about the rapid expansion of the Confucius Institute program and am interested in what its 'results' have been in terms of actually producing people who can speak 普通话.

I have found an answer in the context of Australia, where the estimate was about 130:

I am particularly interested in the context of Africa, although finding good data on this from anywhere has proven difficult.

I found this report provided by the institution that runs the Chinese Proficiency Test (HSK). The report was about the tests that took place in year 2010, which was ten years ago, so things may have changed a bit, but I think we can still get a general idea from it.

According to the report, before November 2009, HSK had three levels: elementary, intermediate and advanced. After then it became the new HSK, which has six levels where six is the highest.

Since there is no good definition of "can speak Chinese", let us assume people who passed the highest level of HSK can speak Chinese. (The two concepts do not equal, but that's the best we can get.)

I don't know how to edit tables here, so I had to paste pictures of the tables (translated into English by me) from that report.

It is noted in the report that in the second half year of 2010, the test stopped asking examinees for this information of whether they are of Chinese origin or not, so the numbers here are smaller than the total number.

So most examinees are from Asia. The other continents have only a few hundreds together for HSK 6, and we don't know how many of them actually passed. 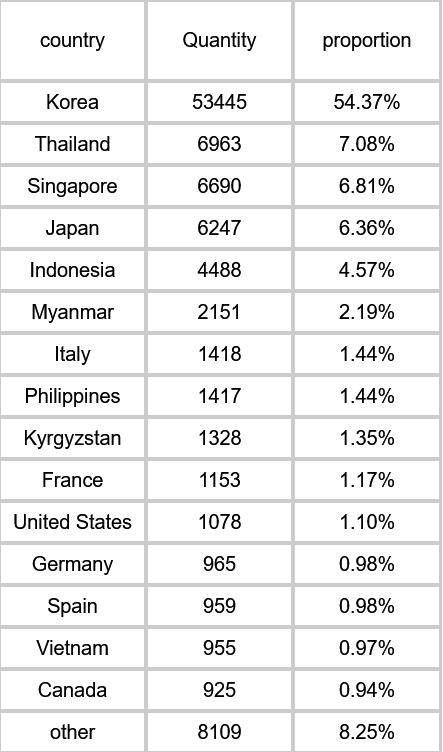 Country information. We don't know which level they took or whether they passed, but if the proportion does not vary very much, we can have an educated guess.

12099 people passed the HSK 6 test in year 2010 and 86.75% of the total examinees of HSK 6 are non-Chinese, so that's about 10 thousand people. Let us multiply that with 20 for all the years and that makes 200 thousand people globally. Africa only has 0.64% so that's about 1000 people. Oceania (0.77%) has only a few more than Africa. That's above 130, but maybe the source in the OP has a higher standard for Chinese proficiency, or people of Chinese origin has a higher chance of passing the test, so for such a rough estimation, I think the numbers are reasonable.

22
Why do native speakers often say a character has “no meaning”?
5
Are there any resources for learners of Chinese dialects that are close to Mandarin?
17
How many characters do Chinese pupils know at different ages?
0
Are there more people in Russia/Ukraine learning Chinese language than other white dominated countries?