How do you know when will the verb be paired with 对?

For example: 我对父母很体贴（✓） 我很体贴我的父母（x） 我很关心我的父母（✓） (The example is given by my teacher but i don't know the reason) Hope you understand my question 🥺

关心 (to be concerned about), on the other hand, is transitive. It can take a direct object.

Whether 体贴 can be considered intransitive appears to be a matter of debate. I'll start by saying that in Mandarin adjectives cannot take objects. This is made explicitly clear on the Chinese grammar wiki, hopefully I wont be forced to find additional sources to back this claim. It follows, then, that any instance of an adjectival verb is intransitive.

All that remains to be seen is whether 体贴 is an adjective or not. It is.

A sentence in the form 我很体贴 where 我 is the subject and 很体贴 is the predicate/verb phrase cannot have a direct object. joehua has linked to several examples of the contrary, sentences where 体贴 has been shown to take a direct object. Why this is, I don't know. Either the term is being misused or it has taken on a different meaning in those sentences. Take for example this page that joehua linked. It has the example sentence "他从小就知道体贴父母" which at face value invalidates everything I've just said. But if you type that exact sentence into Baidu's translator it will output "He has been considerate of his parents since he was a child", taking that English sentence and plugging it back into the translator will give the output "他从小就对父母很体贴". Evidently one is more correct than the other.

Yet even more proof 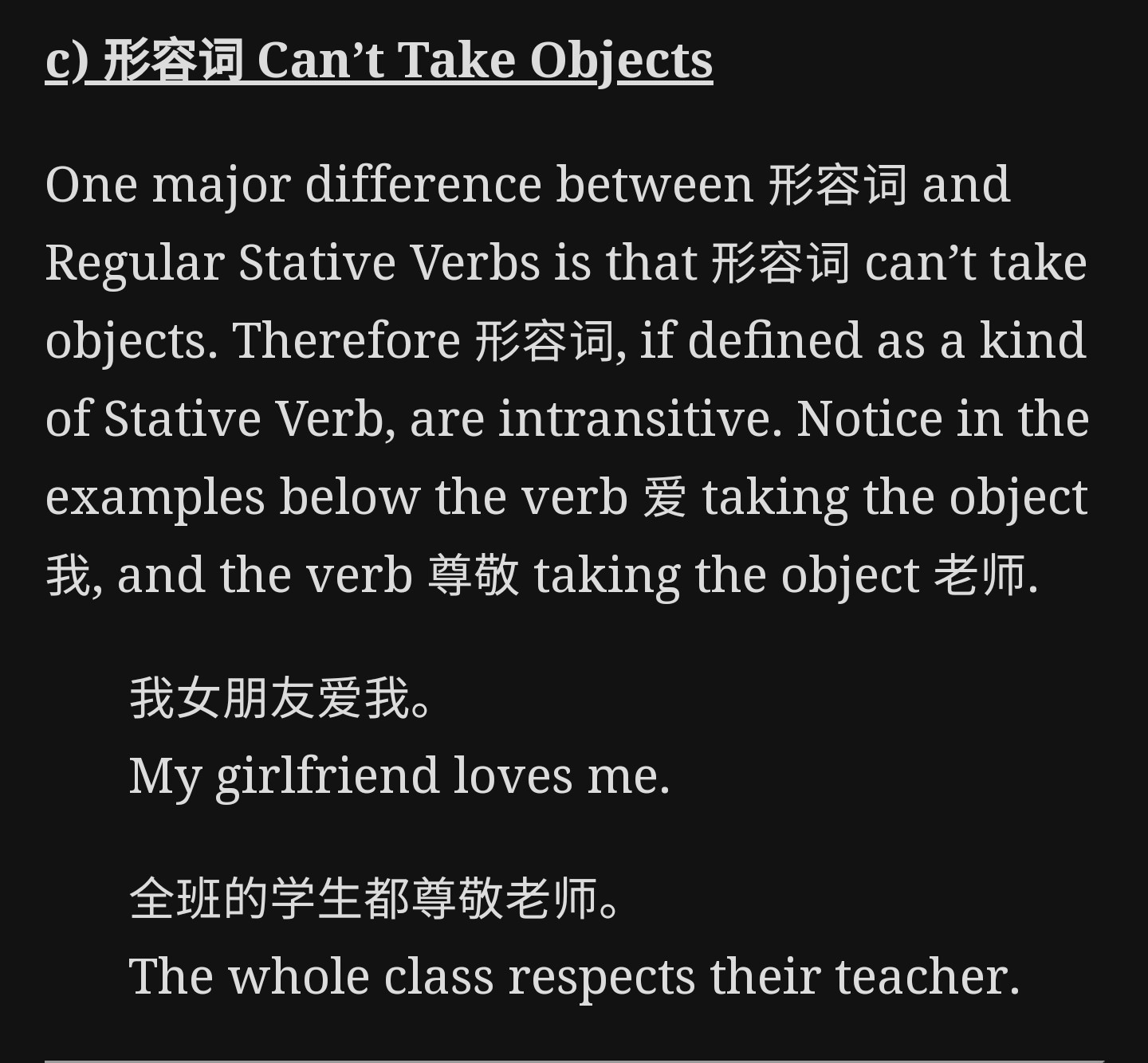 Not the answer you're looking for? Browse other questions tagged usage verbs or ask your own question.

5
What does 些 mean when it's combined with 什麼?
5
How does the particle word "呢" work?
2
When do you use 知道 vs 認識 when discussing when you know someone or some thing?
1
When someone says 我帮你 (I help you), does it imply they will assist you in doing something, or they will do it for you?
1
What's wrong with 空调制冷得不太好 meaning "The air conditioner cools poorly"?
1
How does 上 work as a verb?
2
When to use the single character vs double character form of a verb?
1
How do you ask "Will you see your child next Sunday" in Chinese using verb not verb structure?
1
Where is the verb in reduplication of adjectives "Noun + Adj + Adj + 的"?
0
Is 羞辱 a kind of verb after which you put two objects?