Why use "i" to represent 自然韵？

In teaching 汉语拼音，the biggest headache is how to explain the "i" after the 7 独立音节 should not be pronounced same way as in "bi" "pi" "mi" ... etc. A very serious mistake in semiotics, i.e. one symbol stands for two different contents. Sometimes I am so upset that I want to shout :which genius ivented this?" It is not difficult to explain the concept of 独立音节 because I can always ask my students try to prolong the pronunciation of "zh", for example, here, you get what I called 自然韵。 But why use "i" for 自然韵？ Even "zh-" is better than "zhi". The time I spent to teach this!!!

For native speaker, there's no problem using "i" for three completely different sounds, because the syllables involved are in complementary distribution, meaning that they never overlap and you can always know which one it is from context. This is similar to how ü drops the diacritic after j/q/x, which is also a problem for second language learners, but not for native speakers.

Why? Because they learn to hear and speak the sounds before they learn to write them. The problem you describe is partly caused by the fact that students learn pronunciation from writing.

Finally, if you teach the finals as units, things will become even easier. There's no good reason to focus on letters in Pinyin. What about a that is used to write maybe four different sounds? Or e?

There aren't that many finals, so teaching them as whole units is possible. I wrote more about this here if you're interested.

When devising a writing system to represent the sounds of a specific language, e.g. pinyin for Mandarin Chinese, there is no need to have one symbol representing only one sound. In my very first phonology class, we were given an example in English. Voiceless stops /p/ /t/ /k/ are aspirated at the beginning of a syllable, but become unaspirated when they are after /s/. So phoneme /p/ has more than one pronunciation. Why is there only one symbol? Because, as Poster Olle Linge explains, there is never any confusion in any given situation whether it should be aspirated or unaspirated. And using two symbols would be redundant and confusing to native speakers, and by extension, to second language learners as well. There is no reason to burden them with another redundant symbol. A good system is as simple as possible but not so simple that it loses clarity. If you really need to teach the different nuances in sounds, then perhaps using IPA would serve your purpose. But as far as I know, the average second language learner is not a trained linguist, and likely not well-versed enough in IPA to benefit from that kind of teaching.

The first reaction I had after reading your post was, why on earth would you need to explain that in a language class? The students will be better served by the teacher demonstrating and/or showing how to pronounce the sounds of the language, perhaps by pointing out the differences in the placement of the tongue/ lips, etc. I think Olle Linge provides a very succinct answer to your question. (BTW, I upvoted the answer:)

And on your comment "Do you know anything about 注音符号? If not, I don't see any point of going further on. I am one of the not too many Chinese, as non academician, master both 注音符号 and Pinyin; 繁体字 and 简体字 at the same time. I think I have better macro view on this topic."(sic)

I don't think it's very nice to challenge his knowledge on Zhuyin "注音符号". Maybe he knows it well; maybe not, but IMO, one does not need to know Zhuyin to answer this question on Pinyin.

By the way, if you really need to know, I know Zhuyin and Pinyin, traditional as well as simplified Chinese. I don't think a person like me is that difficult to come by, and honestly, these 4 topics aren't exactly rocket science either. I grew up using traditional Chinese characters, and I remember picking up a book in simplified Chinese in my 20s and just started reading. I think I learned it in a few hours. (Going the other direction is a lot harder, unfortunately.) As for Pinyin, I never studied it formally, but just use my ability to speak Mandarin to match the sounds.

But you forgot why Pinyin was invented: deliberately replacing 注音符号, which is uniquely Chinese.

again, this info is incorrect.

this one is correct.

the history was, after 1919, there were “attempts” to abolish han-chinese characters, and to write them all in latin alphabets, which is the romanization of chinese (漢字拉丁化). some of these were held by the kmt, or communist.

if it was success, a chinese book written by latinxua sin wenz (拉丁化新文字) would be like this: 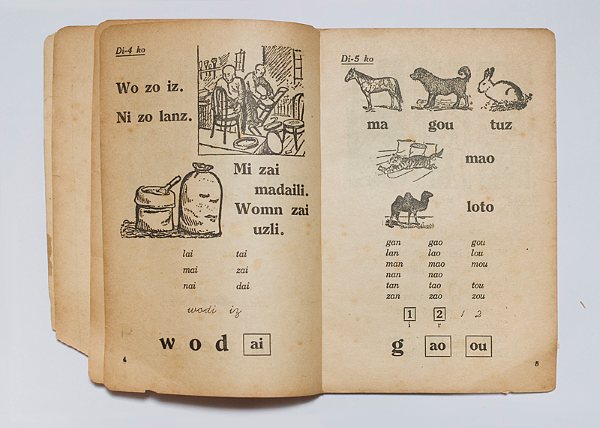 pinyin is part of this campaign, that, pinyin was created for teaching people (those who were under communist control) to the spoken and listen aspects of the latinised chinese language.

on pronunciation side it's Pinyin to replace Zhuyinfuhao, nationalized in 1918 by the government, through several modification, finally settled on the system now at 1932.

Hanyu Pinyin has developed from Mao's 1951 directive, through the promulgation on 1 November 1957 of a draft version by the State Council, to its final form being approved by the State Council in September 1978, to being accepted in 1982 by the International Organization for Standardization as the standard for transcribing Chinese.

John DeFrancis has described Mao Zedong's belief that pinyin would eventually replace Chinese characters, but this has not come to pass, and in fact such a plan had already ceased together with the end of Latinxua Sinwenz movement.

Not the answer you're looking for? Browse other questions tagged pronunciation pinyin or ask your own question.

13
Do acronyms borrowed from English use neutral tone (aka tone 0 or tone 5) for all syllables?
17
Why is it written LIU in Pinyin, when there's clearly an O sound?
4
Did phonological systems (namely bopomofo) standardize Chinese phonemes?
2
When do I use V for Ü in Pinyin programs
1
Why is the pinyin of these two character is so weird?
1
Asking Chinese mother-in-law to learn pinyin?
4
Why -ian instead of -ien and -üan instead of -üen?
7
Why e is pronounced differently in de (的, 地) and ye (也,夜)?
3
Is the pinyin for 他撇了撇嘴 actually "tā piē le piězuǐ" (as given by Pleco)? And if so, why are the two 撇s pronounced differently?