I came across Ê±ü‰ø°Ê±üÁñë in this tweet about a meme. It clearly has something to do with Jiang Zemin / Ê±üÊ≥ΩÊ∞ë. It seems to be quite commonly used; my guess is that it's something people say on Internet that refers to politicians, or heads of government, and their trustworthiness (or lack of it). But this is just a guess.

What does Ê±ü‰ø°Ê±üÁñë actually mean? What's its "back-story"? Is it just used online, or could it be used in spoken Putonghua? Perhaps a few sample sentences would be useful too.

I'm basing my answer on the article Ê±ü‰ø°Ê±üÁñëÊòØ‰ªÄ‰πàÊÑèÊÄù which gives a reasonable explanation.

It's a play on words. It begins with

However the meme replaces Â∞Ü (‚ÄãjiƒÅng‚Äã) with the surname Ê±ü (JiƒÅng) which has the same pronunciation and is the family name of Jiang Zemin (Ê±üÊ≥ΩÊ∞ë). Then it's added as a caption to memes where Ê±üÊ≥ΩÊ∞ë looks skeptical, such as: 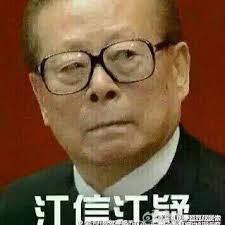 I'm not really sure how the meme evolved beyond that to what you see on Twitter.