For a student studying Chinese as a second language, is there any practical difference between the radicals 匚 and 匸?

At the LTL Mandarin office in Beijing, there is a poster of the Chinese radicals, in which we find the 匚 and 匸 radicals:

Until seeing this poster, I didn't realize these were different. This leads me to the question...

Question: For a student studying Chinese as a second language, is there any practical difference between the radicals 匚 and 匸?

They are so similar that perhaps only a calligrapher might consider it worthwhile splitting this hair. But maybe there is some situation where this distinction is important.

For a student studying Chinese as a second language, is there any practical difference between the radicals 匚 and 匸?

For the ordinary practical purposes of reading and writing there is no distinction, even when Chinese is used as a first language.

In some fonts the distinction is only visible in the radicals themselves (匚 and 匸), and not when they appear as components of characters. In other fonts there is sometimes a top-left protrusion with a bottom-left rounding for the component 匸.

While most Chinese-only dictionaries I have seen do still retain the distinction, I have with me 黃港生 (1991)《商務新字典》 (ISBN: 9620701402) in which the two radicals are actually merged together: 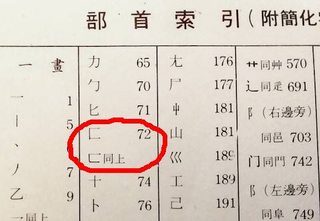 But maybe there is some situation where this distinction is important.

Other than this, the only people who will care about the distinction are pedantic calligraphers, or lexicographers arguing about etymology.

* I'm not certain what 衺徯 means. "Sleeve-pocket" is a guess.

Sort of in a rush here so just some hints. First, I'd say the suggestion that 'their pinyin is different, so they must be kept apart' is, well, not wrong and not right. Neither of the two box/enclosure characters is used by itself in the modern language, so the situation never arises. There are also artificial radicals that were never used by themselves and were only stipulated to explain the formation of characters and/or serve as dictionary headings. These may well be ones, and I suspect that when you go and study the small seal forms of modern characters you will find a more pronounced difference in shapes than is visible in the modern forms. This is analogous to what happened to 月 which is the modern conflation of at least: 月 moon, 舟 boat, and 肉 meat/flesh. There have been numerous attempts in history to undo these and other conflations, mostly by requiring people to observe minuscule variations in how the strokes are put together. None of these attempts was ever widely followed, and the conflations have stuck.

One practical way to decide whether I or you should care about the 'box' radical being different from the 'enclosure' radical would be to glance over the historical record of how calligraphers treated these; for example, by looking at http://www.guoxuedashi.com/zidian/531A.html and http://www.guoxuedashi.com/zidian/5338.html you can already tell that at least this source gives almost identical details for both radicals. I'd then recommend to look at what's listed in 书法 section of that site for a number of characters that are sorted under both radicals and see whether historically people have made any discernible difference between the two. If not, I'd say you're free to do the same.

Edit Comparing 匣 Rad. 22 and 區 Rad. 23 makes it, IMO, clear that (1) there's no very clear distinction between the two made even in the early forms; (2) conversely, a number of stroke order and stroke shapes is used for either radical, some writers preferring to write top, inside, then left-bottom, others using top, left, inside, bottom order.

Edit 2 I just counter-checked with 《新書源》（二玄社，東京，2009, 2013, pp114ff） and I'd go even one step further here. I could not locate any source that has the distinction the 說文解字 makes between the two radicals, namely, the straight end of the bottom line for rad. 22, and the drooping end of the same for rad. 23. There are a few forms predating the 說文 but none has a drooping line. Based on this evidence I suspect that 許慎 Xu Shen is responsible for introducing this distinction, and it wouldn't be the only time that there are allegedly authentic seal forms that are somehow only represented by this single dictionary. It is also known that a few character forms that we today regularly distinguish were kept apart only by the late Han and used indistinctly before that, an example being 人 and 入, which are likewise only separated by the tiniest of hints (and observe that 入 violates a principle of 楷書 calligraphy, so even this may be an artificial distinction, albeit one that gained currency).

Xu Shen may have had good reason to separate 匚 and 匸, his work being more of a student's rote memo book than a work of epigraphy or etymology proper. Maybe in his day it was part of being an educated man to be aware of a difference although both looked identical. Be that as it may, the distinction never caught on, and seeing how very few characters are grouped under either of these two radicals, I think one can best ignore the distinction for all practical matters.

Not the answer you're looking for? Browse other questions tagged difference radicals or ask your own question.

2
What order does the country name sort by in Chinese?