Where does this character 款 come from? Its meanings (model/style or fee/payment) doesn't seem to have any link to the semantic part 欠, unless it specifically refers to owed money/payment? And what does the left component mean? I haven't seen the left side (phonetic?) component in any other character before.

Seeing as all the other answers are getting downvoted - I'll just leave this short reference here:

FORM
款 kuǎn was originally composed of 柰 nài (now written 𰧭) and 欠 “person with their mouth open,” which hints at the original meaning “to desire something that one does not have.” 柰 gave the sound (but for the reading kuài).

COMPONENTS
𰧭
In 款 kuǎn, 𰧭 is an empty component. It was originally 柰 nài, which was the sound component (but for the reading kuài).
欠
In 款, 欠 “person with their mouth open” is a meaning component, hinting at the original meaning “to desire something that one does not have.”

MEANINGS
kuǎn
1 (orig.) to desire something that one does not have
2 ○ sum of money, fund
3 → wealth; wealthy person
4 → item
5 ⇒ clause in a document

The reference Outlier gives here is from:

and here is the excerpt from Ziyuan: 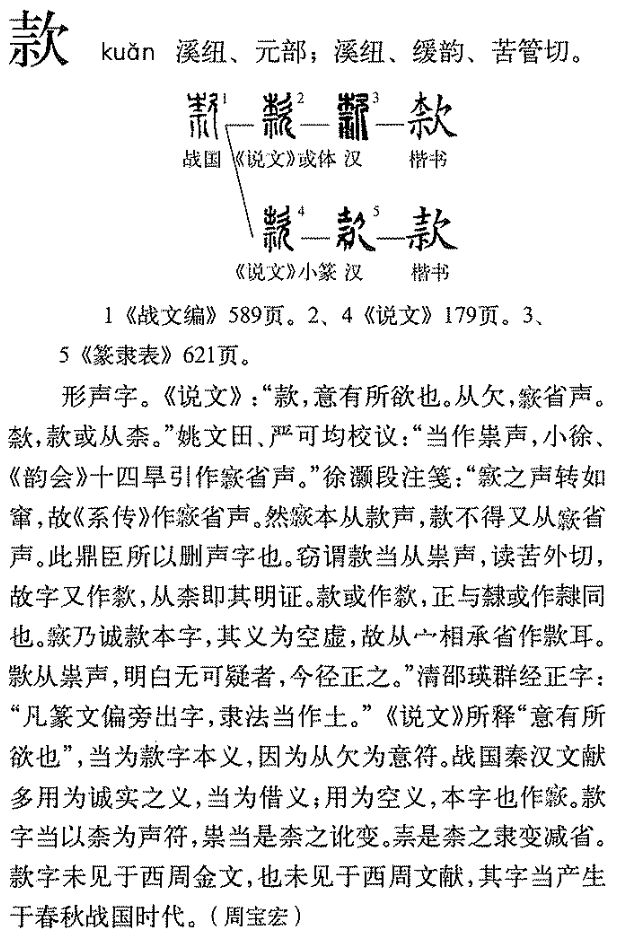 and its extracted text:

This one makes me laugh because of the internet slang pun that can often be found associated with 柰. Especially, here, situated next to an open mouth. But, perhaps that reinforces the desire for something you don't have.

「款」 (empty/hollow [now written 「窾」], wanting) uses 「欠」 (to lack) as a semantic component. The common meanings in use today are most likely phonetic loans.

欠is a Independent character. 欠 can be combined with other component to form a character. The left component of 款 is not a character, it just forms part of the character（款）, and it has no meaning.

It was a independent character from the very beginning and had nothing to do with “欠”. The earliest version of "款" we know today came from the warring states period (the left one) 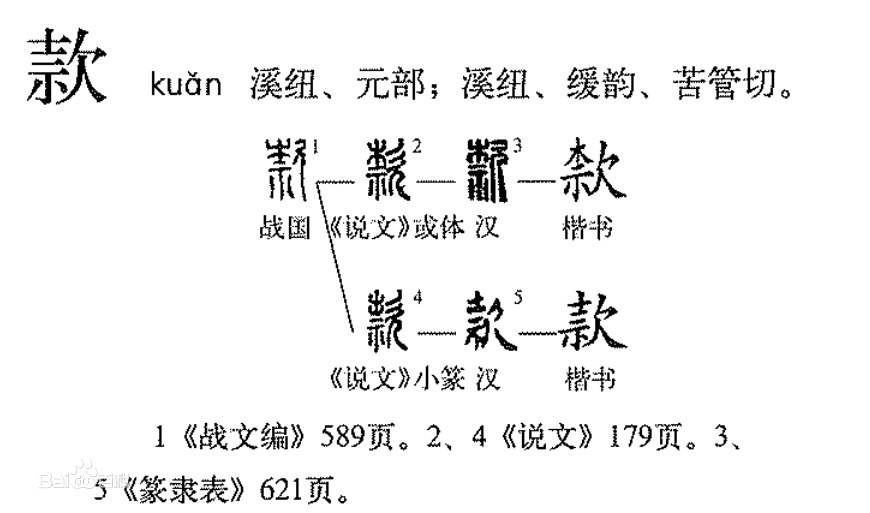 "欠" at that time was something like "专". It became the "欠" you know today at Han dynasty (a few hundred years later). It was just a coincidence they developed into the same shape.

BTW, 款 at the beginning didn't mean "fee/payment". It meant “sincere”, and today it still has this meaning when you use words like “款款”

Not the answer you're looking for? Browse other questions tagged etymology glyph-origin character-components or ask your own question.