There are two chops. My name is Jake and my wife's name is Kenwyn (Ken-win). We believe the chops were created to represent our names phonetically in Chinese, versus using the symbology to convey an idea representing us. The chops are stone and they are signed by their maker. The picture of the chops was made by taking the square chop, orienting it so that the maker's signature was on the side on the "top" then pressing it to the paper. We do not know if this was the maker's intended orientation. We would like to know which chop is which and what the correct orientation of them shop be (are they upside down or not?) Any assistance would be gratefully accepted. Thank you in advance. 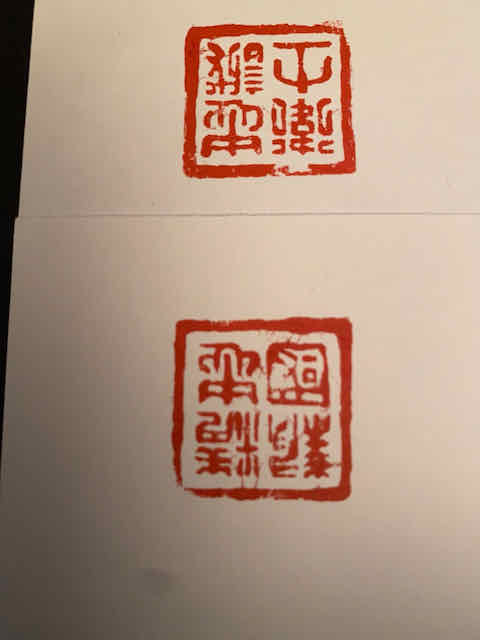 The first one (精忠報國 or 精忠报国 in simplified characters) means to serve one's country with absolute loyalty and make all sacrifices. There is a story tied to this phrase. In the Song Dynasty (around early 1100s CE), there was a famous general called Yue Fei. In order to remind him to serve his country and encourage him to fight against the nomadic invaders, his mother tattooed these four characters on his back.

The second one （忠誠衛士 or 忠诚卫士 in simplified characters) means a loyal defender. There is no story behind this phrase, but it is commonly associated with the Chinese armed police forces.

These two phrases have little to do with your names unless you are part of the military or police.

This is the correct orientations of the two chops. 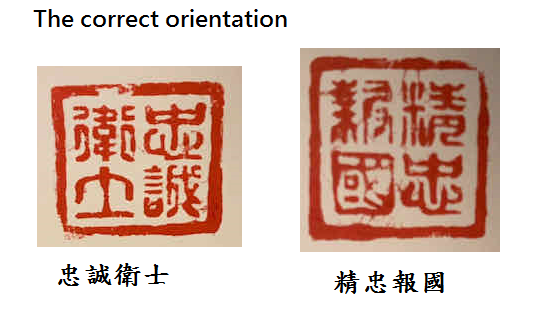