What is a better translation of 箱子 in the following context?

The phrase 这辆铲车正在把箱子装上卡车 seems at first glance to say "This truck is loading a box onto the truck", but in fact this is used along with the below photo. Is it right to say that 箱子 in this context means "pallet" or even "pallet of goods"? Or possibly "shipment", or as I've seen on Google Translate, "casing"? Or is there an even better translation available? 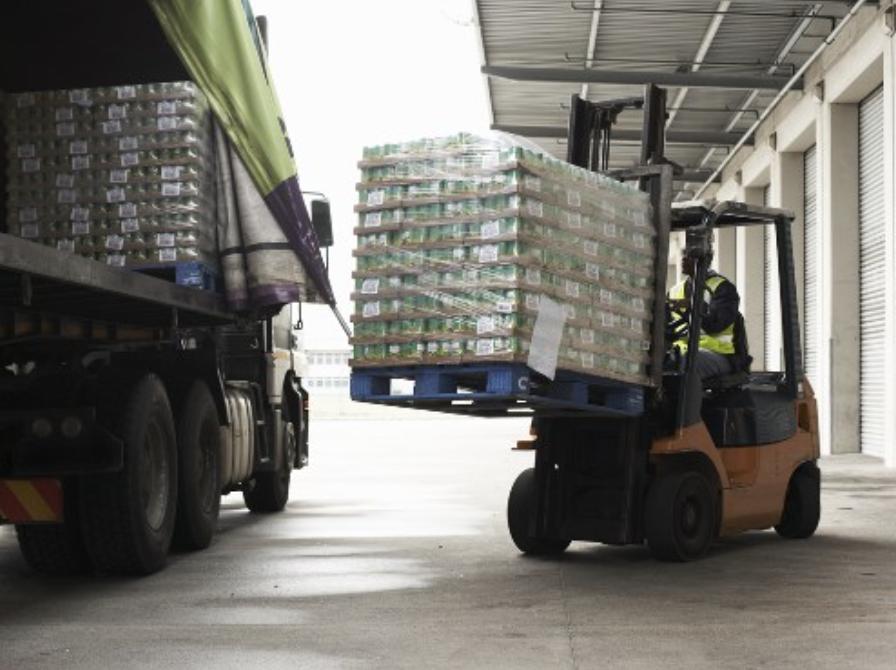 A few possibilities come to mind:

First, given that there is often no indication of plurality in Chinese, 箱子 may actually be indicating "boxes", rather than "box". That is, each pallet does contain many boxes and so the fork lift is loading many boxes into the truck.

Second, depending on where you saw this picture and caption, it is possible it is just a simplified translation for learners. That is, for materials used for English language learners, we may say that "the forklift is loading several boxes into the truck", rather than "the forklift is loading a pallet into the truck". The reason is that "pallet" is relatively advanced and relatively rare vocabulary, while "box" is lower level and more commonly encountered in (most people's) daily life. Though, admittedly, "forklift" (and 铲车) is also pretty advanced/specific.

Thirdly, from Pleco, I am seeing several possible translations of pallet as 托盘，栈板，货盘. I am not sure which is most commonly used for a commercial pallet such as this, but I guess it is 托盘 as the word for pallet jack is given as 托盘车.

Ultimately, it may come down to regional preferences and/or what 箱子 is commonly thought to encompass by native speakers. Because of how different Chinese and English are, it is very difficult to take the intuition about a particular word from one language and transition it to the other language. That is, what Chinese think of the word 箱子 may be much broader than what an English native speaker may think it would be. For English natives, we would think of a suitcase and a box as being rather different things and probably would never, or only very rarely, call a suitcase a "box", but one of the definitions for 箱子 is suitcase.

As another example in the other direction, the English word "mask" seems to be rather broadly defined from a Chinese perspective. That is, the word "mask" in English encompasses both a surgical mask that covers only mouth and nose and a decorative/performance mask that covers the whole face, but a surgical mask in Chinese is 口罩 and a decorative/performance mask is 面具, which seem to be rather different words when looking at the characters and their individual meanings. I also recall a Chinese native expressing how they found it weird that we call both of those things a "mask" in English. To them, they are rather different things as one is just for nose and mouth, while the other covers the whole face. We care less about this distinction in English, using adjectives to modify the general concept of "mask" instead of thinking of those two kinds of mask as being in different categories.

I realize that this is not a definitive answer, but it hopefully gives some insight and possible ways of thinking about word choice (in both Chinese and English) in these kind of contexts.

The forklift is loading the box into the truck. 铲车 forklift ; tractor shovel 正在 in process of ; in course of 箱子 chest ; bin ; box ; case 卡车 lorry ; truck ; autotruck ; autotrack

3
Help translating 爱人跟人走
4
What is the Correct Sense of 隔空喊话 in English?
0
Does the word 酱 in 酱香 refer to 醬油?
1
What do these two seal stamps and these three characters on my Chinese painting mean?
5
What do these two characters on cufflinks signify? (Characters identified: 福 and 壽/夀)
1
Can I translate “still alive” as 还活着?
2
What is the meaning of 妖星?
0
How to ask for response and closing statement in a letter in cantonese and in traditional chinese?
2
無神除神, There is no God but The God
8
How do I self-answer “What does this say?”