What is the nature of the term 什么都?

While talking on discord someone typed that they were studying, to which I jokingly replied, "我已经学会什么都了，没有没学的", though people were quick to correct me, apparently 什么都 is not a noun and belongs before the verb. I don't like this one bit, 什么都 to me seems like the object of the verb and I can't make sense of it as an adverb. I thought maybe historically 什么都 was preceded by a verb that has since fallen out of fashion, making the sentence originally function as a serial verb construction (我已经_什么都学会了) which makes intuitive sense to me but is pure conjecture. Whatever the case is, I would like someone to clear up my confusion

But the omission doesn't always work well. E. g. 我把这件事给忘了. It doesn't sound right to say 我这件事给忘了. In this case, we do need 把 and can't be omitted.

So be cautious of this omission in practice.

The way you parse it seems to be an issue to begin with, as it isn't a single entity but rather a two word pattern.

Allset Learning notes how this is confusing for learners:

什么……都 (shénme... dōu) is a pattern often used to express "all" or "everything." Because it's not just one word, though, it can be a little tricky to get the hang of at first.

They also give the basic structure to this pattern

Grammatically speaking 都 is always going to be followed by something. Here are some short examples of usage:

and some negative ones

My only guess to your confusion is that you're mixing up 什么的 with 什么都, as they could sound similar especially when spoken quickly.

什么的 tacks right on the end of sentence to express, "and the like." Here's another excerpt from Allset Learning

什么的 (shénme de) is an informal way to express "and so on," and is used to end a list of items when it is obvious to the listener what class of things the speaker is talking about. 什么的 can also be used after a single item if it is obvious enough what might follow.

They also give some examples of usage:

and here's one that also includes a 都 + 不

It could be the case that you've mixed these two up.

To begin, 都 as seen in "我们都喜欢看电影" is oft transcribed as "all" which has the potential to be misleading since "all" used in this sense in English is an adjective. To steer clear of such misunderstandings and to keep in mind that 都 is in fact an adverb and modifies the verb following, it aught to be transcribed as "entirely" or "collectively" (i.e. We collectively like watching movies).

keeping in mind that 都 functions as an adverb aught to, here I am citing "Mandarin Chinese: A Functional Reference Grammar" by Charles N. Li and Sandra Thompson: 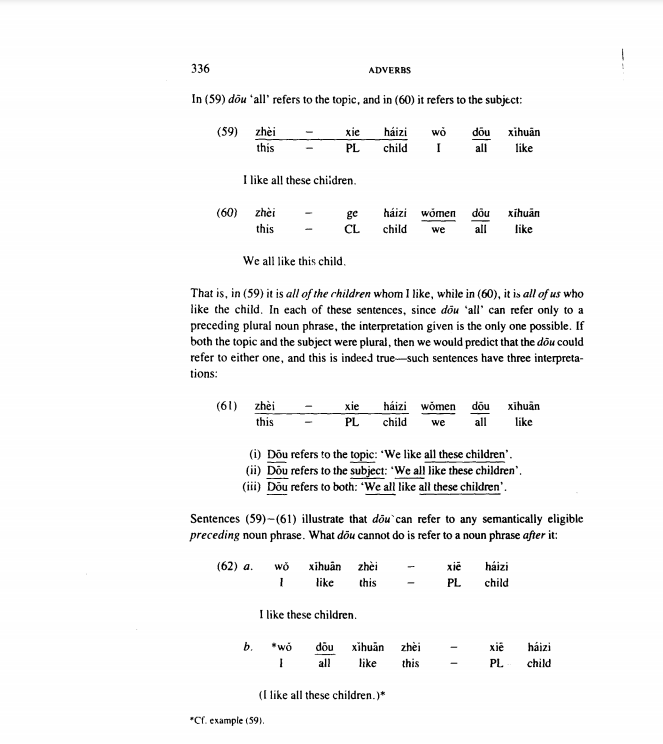 And so, it is due to the unique constraints of 都, in that it must be preceded by the noun phrase being referred to, that we see 什么 occupy such a weird position. Though the book states that the preceding noun phrase is "generally" the topic or subject, this does seem to be an exception. In the sentence "我已经什么都学会了" I was not wrong in assuming that 什么 was the object of the sentence, it is in fact due to the unique constraint of 都 that the sentence has been forced to take on a SOV (subject-object-verb) word order.