I have a work of calligraphy that I am trying to get as much information as possible on. The story behind it is that back in college, I took a Chinese calligraphy summer session course (was maybe 4 weeks long) taught by a visiting artist from Hangzhou. He was a very kind, gentle guy, and I really enjoyed it. At the end of the course, I decided to ask him if he would write a passage for me from one of the practice books we were using to copy our characters from, as a small souvenir. He said that those passages would be kind of childish, like a nursery rhyme, and he would do something different for me. He had taught us the different writing styles, and asked me which I liked best. I chose Li Shu style - it was the one I most enjoyed doing (I've since read that Li Shu is generally regarded as the easiest for beginners to learn), and I thought it looked the coolest. So several days later, the last day of class, he surprised me with this. I didn't expect he would actually produce a work of art for me, with his seals and everything; it was incredibly nice of him. 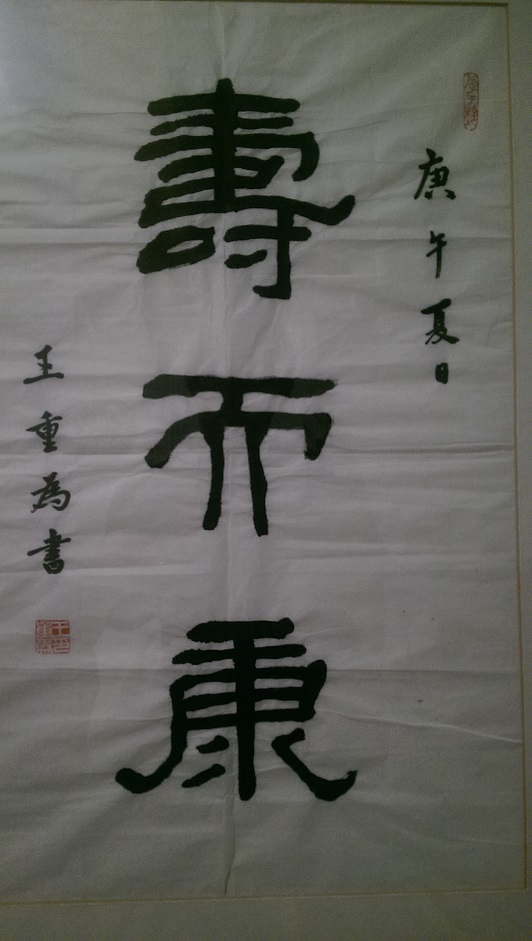 So from what was explained to me at the time, and from other research, I know that 寿而康 means "Longevity and Health", and comes from ‘饮且食兮寿而康，无不足兮奚所望‘ in a Tang Dynasty work by Han Yu. And I know that 庚午夏日 in the upper right means "Summer Day, 1990", which is when this was done. And I know that the lower left writing 王重為書 means a work by Wang Zhongwei, his name.

For the seals, I know that the lower left is his name seal. But I cannot make out the characters in the upper right seal. 3 characters, correct? Is that a date seal, mimicking the written date 庚午? I can almost see those as the first two characters, but the bottom character is a mystery. Or maybe it is not a date seal, and something else altogether? 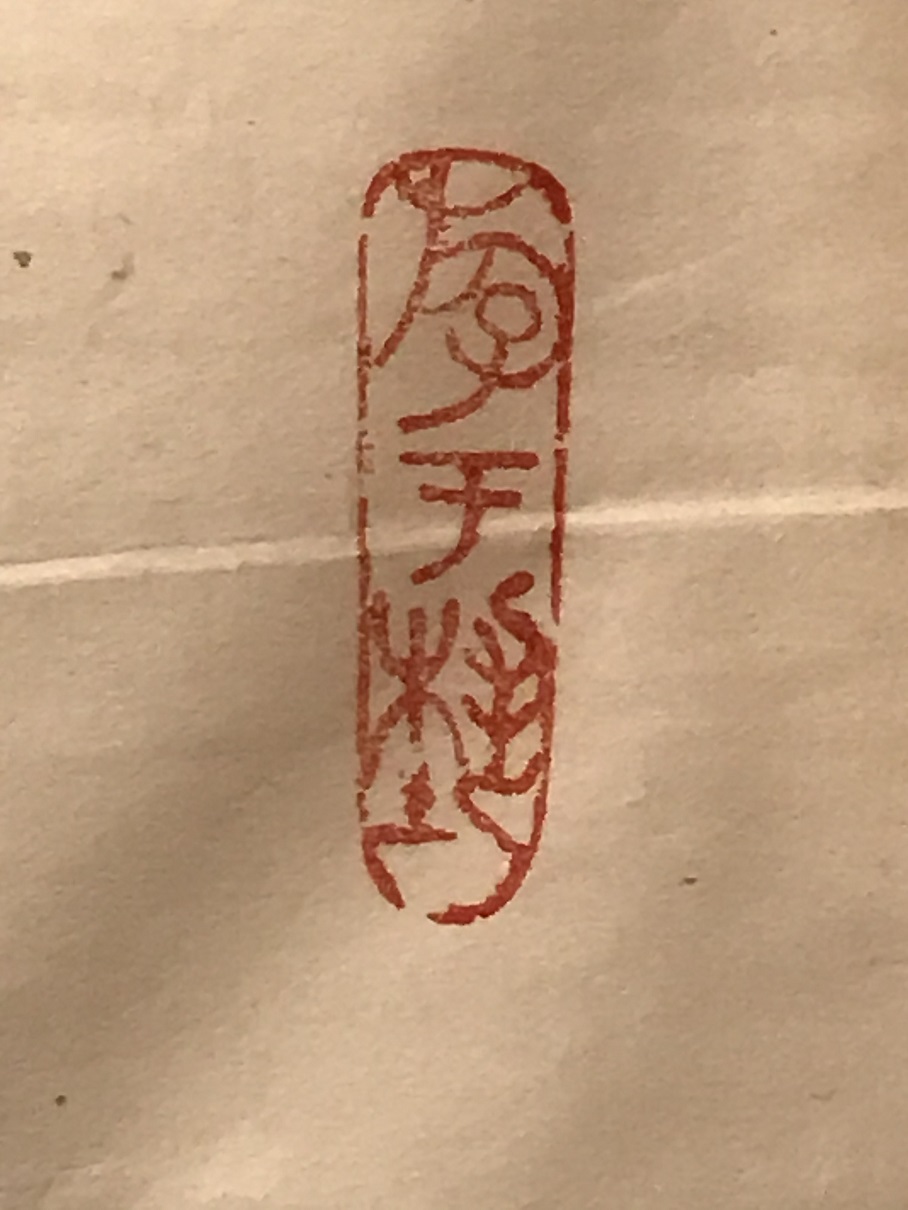 Lastly, does anyone know anything about Wang Zhongwei? Like I said, he was from Hangzhou, and was apparently a locally well regarded/decorated artist, but of course I wouldn't know if that were true or not. He was maybe in his late 20s/early 30s at the time, so would expect him to be around 60 now.

Any and all comments on this much appreciated! 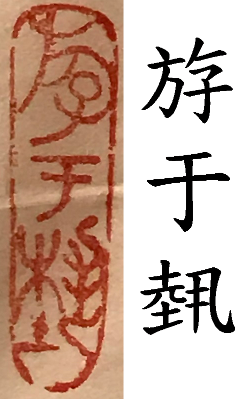 The characters are 「斿于𡎐」, or using ideographic description sequences: 「斿于⿰坴丮」. These are stand-ins for what we would now write as 「游于藝」; 「斿」 is the right hand side of 「游」, and 「𡎐」 is a seal script form of 「埶」, forming the middle part of 「藝」.

The phrase referred to is a line from The Analects: Transmission of Learning:

The Master said, "Let the will be set on the path of duty. Let every attainment in what is good be firmly grasped. Let perfect virtue be accorded with. Let relaxation and enjoyment be found in the polite arts."

0
Artist seal and meaning
1
What do these two seal stamps and these three characters on my Chinese painting mean?
3
Shen (神) character painted over a seal
4
What does this seal stamp say? (Characters identified: 石黑香香)
1
Unknown painting of a lady
2
Can anyone help translate this signature / red seal
2
Need Chinese phrase that would mean "dedicated craftsman" for calligraphy piece
1
I would like to know the translation of the writings on an ancient seal, to English, please
1
I would like to know the translation from a small seal script, on an ancient seal, into English