How does 稱's 2021 meanings appertain to its semantic component 禾?

CUHK doesn't expound the semantic shift from 禾. I underlined definition 4 below in green, because I know that rice and grains may need to be weighed. But I don't understand how definition 4 relates to the other definitions. When you weigh something, you're reporting a rational number. Weighing something differs from calling, naming, commend, praising something. Yellowbridge.

How does 稱's 2021 meanings appertain to its semantic component 禾?

The meanings which aren't related to weighing are not really related to 「禾」 - these meanings were actually held by 「爯」. 「稱」 and 「爯」 are related by the following:

「爯」 depicts a hand 「爫・爪」 grabbing a fish 「魚」 upwards (e.g. out of the water), indicating the original meaning to lift up, to raise up. Occasionally, 「爯」 was complexified with extra components, which don't survive today. 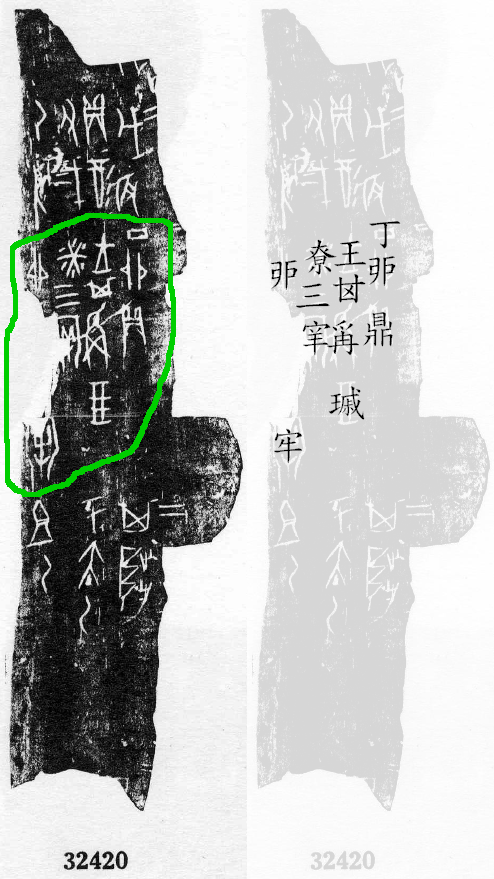 Divination on the day of dīngmǎo, it is asked: "Shall the king offer up a ceremonial jade weapon, conduct a burning ritual with three penned sheep, and perform a slaughtering ritual......penned cattle?"

Very early on, 「爯」 or its variations started also acquiring the meaning to weigh. From the Late Warring States State of Jìn artefact 信安君鼎《殷周金文集成》2773:

[DǏNG VESSEL] OF THE BUTLER FOR THE LORD OF XÌN'ĀN
Vessel capacity: half a dǒu
Officer on duty: 欨
Vessel bronzesmith: 癐
[Date:] Year 12
Vessel weight: 2 yì and 6 jīn

Since 「爯」 had taken up too many meanings, semantic components were sometimes piled on to the character to disambiguate the uses:

Unfortunately, the character 「偁」 fell into disuse, so 「稱」 in turn also became overloaded. This was probably the major reason for the creation of 「秤」, which is only used for meanings to do with weighing, balance, scales, and not used for the overloaded meanings to raise, to praise, to call that 「稱」 had taken on.

FORM
稱 chēng (also chèng, chèn) is composed of 爯 chēng and 禾 “grain,” which hints at the original meaning “to weigh, measure.” Grain was one of the most commonly measured things in ancient China.

COMPONENTS
禾
In 稱, 禾 “grain” is a meaning component, hinting at the original meaning “to weigh, measure.” Grain was one of the most commonly measured things in ancient China.
爯
In 稱 chēng (also chèng, chèn), 爯 chēng is a sound component.

This becomes a bit of a which came first the chicken or the egg-type of puzzle. Here we can see that to weigh was the original meaning associated with this glyph. Then came to raise/to lift, which makes sense in relation to how grain would need to be weighed. This was further extended to the definitions of to praise/to laud, which is logical in Chinese as being lifted up is often associated with being shown respect or a rise in status. From this came to state/to say, and lastly came the meaning of to call/to name.

Laying the meanings out like this seems to make it much easier to understand.