What are the differences between these two radicals? What is etymology? Both represent same character or different?

I highly advise against understanding Chinese characters in terms of radicals. The word radical (部首) is a specialised term that is only relevant to Chinese Character dictionaries, which organise Chinese characters under section (部) headers (首).

You may find the following two Q/A threads helpful:

The two completely different characters which now commonly both look like 「阝」 when found in other characters are 「邑」 and 「阜」. As part of other characters, their shapes can be traced to 「阝」 like in the following table:

Notice how both 「邑」 and 「阜」 occurred on either the left or right side of a character;* the modern convention of interpreting 「阝」 on the left as 「阜」 and on the right as 「邑」 is only a convenient disambiguation mnemonic after both shapes have merged into the shape of 「阝」 as part of other characters; there was no such rule in earlier forms of characters.

Individually, of course, they still exist as distinct shapes, as demonstrated in the table below.

「邑」 originally depicted a kneeling person 「卩」 outside of city walls 「丁」†, indicating the meaning town, city, settlement. It occurs in many characters to do with these meanings, for example:

「阜」 originally depicted something like a row of rocks 「石」, and is commonly used to denote characters to do with hills/mountains and rows/arrays. For example,

*「邑」 can even occur on the bottom of a character; see e.g. the glyph evolution table of 「巷」. 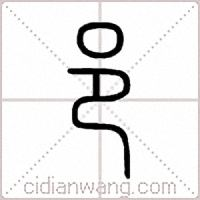 Not the answer you're looking for? Browse other questions tagged glyph-origin radicals or ask your own question.

1
Mnemonic or technique to remember 咅 ,部, 陪
1
What does 尔 really mean?
2
Besides the radical, what meaning does the rest of a Chinese character have (especially when it was originally created)?
1
Mnemonics for 汉字: examples and resources

27
How can one determine the radical for a given character?
8
What is the part without the radical called?
12
How to differentiate "radical plus 0 strokes" characters?
2
What are the radical names?
3
Understandable names of the radicals
6
Are there characters in which the radicals are the same but the position changes the meaning?
3
Same radical/character with different pronunciation
6
Why are the lists of Kangxi radicals different everywhere?
1
Is 纟 obtained by simplification of 糸 ？
0
Does 习 contain the alterantive hook (Kangxi 6) radical and is more information available about this alternative form?