But it doesn't explain why it is 丑.

丑 is originally a hand with curled fingers, later borrowed to become an earthly branch. Ugly, and all its associated meanings like disgrace, shame, and even clown were originally 醜, which became replaced with 丑 in 'simplified' Chinese. I believe 丑 was borrowed as part of 羞.

羞 is a hand 手 holding a lamb 羊, to offer it as a sacrifice or for food, originally meaning "offering". The hand got changed into 丑, which doubles up as phonetic component. Offering is now written as 馐.

羞 earlier on had its meaning shifted to become shame or shy, possibly because lambs and sheep are shy and timid creatures, while ugly was still written as 醜.

The character 「丑」 is not related to the character 「醜」. Correspondingly, there is no relation between 「羞」 and 「醜」. 「丑」 is exclusively used nowadays for the meaning second earthly branch; PRC's usage of 「丑」 to mean ugly is a phonetic loan, and is not shared among other character-using languages.

The character system and the Chinese language don't really work around "Simplified Chinese", which is really just a drastically changed writing standard made up in the 20th century and (for all intents and purposes) only used in the PRC. I would suggest not to think like this,

which is backwards logic, but rather

because knowing that it is almost always PRC and “Simplified Chinese” which did something bizarre, one can more easily pick out nonsense like this:

The above sentence is an incredibly sloppy machine conversion of the following "Simplified Chinese" sentence:

The correct interpretation of this sentence is

「羞」, classified as simultaneously compound-semantic and phono-semantic. Based on oracle bone script, 「羞」 depicts a hand 「手」 grasping a sheep 「羊」, representing the meaning to respectfully offer [something]. In small seal script, it is comprised of semantic 「羊」 and simultaneously semantic and phonetic 「丑」, where 「丑」 is a graphical corruption of 「手」. Original meaning: to respectfully offer [something].

This description is not quite right, because it muddles the description of character components; specifically, whoever wrote this mixed up the character 「手」 with the character 「又」, which are distinct. Although both 「手」 and 「又」 represent hands, characters point to distinct words which involve different sounds, and 「手」 (Baxter-Sagart OC: /*n̥uʔ/) is not etymologically related to 「又」 (/*[ɢ]ʷəʔ/, right hand, now written as 「右」).

Sheep were one of the most important livestock animals during the Shāng period, commonly kept in pens for sacrificial purposes and used as tributes and offerings. From 《甲骨文合集》32420: 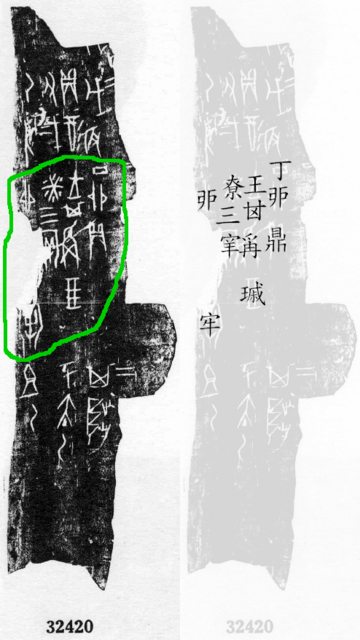 Divination on the day of dīngmǎo, it is asked: "Shall the king offer up a ceremonial jade weapon, conduct a burning ritual with three penned sheep, and perform a slaughtering ritual......penned cattle?"

Not the answer you're looking for? Browse other questions tagged character-components or ask your own question.