In an intermediate level class (B1 or B2 level perhaps / around HSK 5 or 6), several example sentences were used to illustrate some vocabulary. The teacher, a native speaker with fairly standard pronunciation as far as I can tell, was not concentrating on pronunciation or tones. I do not remember them exactly, but they all had a structure similar to:

In any case I was struck by hearing 很有 read in these sentences as if the 有 was like a fourth tone. Also I am pretty sure that 很 was quite low; nothing like the second tone that would be expected by consecutive third tones. Which surprised me a bit.

I do not think I have seen anything describing this intonation/pronunciation. I would like to know if it has been described anywhere / if it is a commonly observed phenomenon. For 很, perhaps it could be a case of "Quasi-neutral tones in speech to contrast intonation." as mentioned in this answer? But for 有 sounding like a fourth tone, I never saw that described anywhere.

So my question is: what is going on with the intonation/tones for 很有 in this sort of sentence?

Now that we have made clear this was normal-paced, I am starting to suspect this is similar to the case of 比較, where some people say it as (bǐ jiǎo ->) bí jiǎo instead of the conventional bǐ jiào (see here for more examples). The link contains examples of non-dictionary readings.

I also found evidence where 有 may be pronounced as yòu: see here. Its use is relatively limited, i.e., when acting as a loan word (通假) for 又 in classical Chinese*, or when denoting numerical remainders (e.g. 七十有七人), both of which are not the applicable to 很有. However, 教育部重編國語辭典修訂本 claims yòu and yǒu are interchangeable (I for one think this is rarely practised in real life). At any rate, the teacher's choice of pronunciation is not mainstream. I also believe this is caused more by the polyphony of 有 than facultative tone sandhi during quick speech. 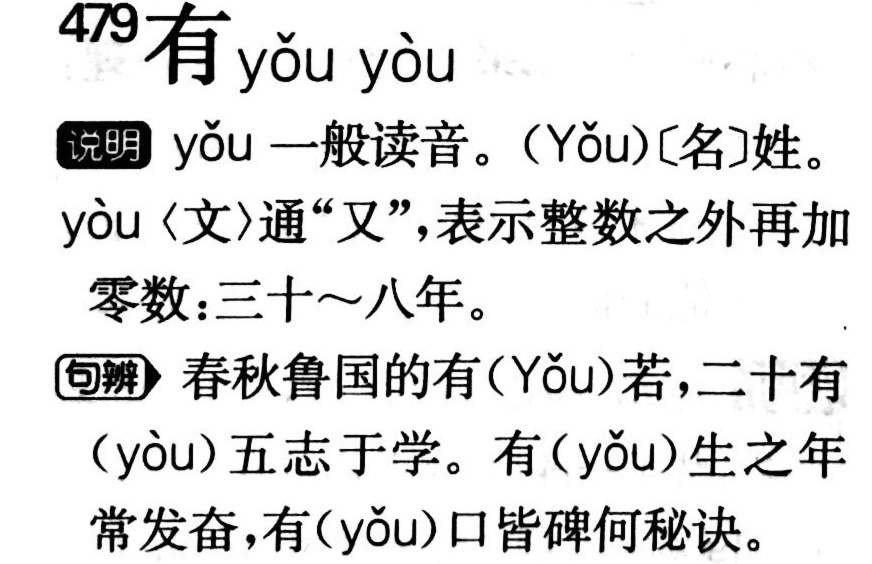 Not the answer you're looking for? Browse other questions tagged pronunciation tones sandhi or ask your own question.

10
words where it is important to distinguish between the neutral tone and the citation tone
5
Generalize consecutive third tones change rule
2
How do natives pronounce the 2nd tone in regular conversation? (Pitch levels: 35, 33, or 434?)
1
Is it true that the tones of some of the most common words are glossed over in regular speech/turn into neutral tone?

13
Do acronyms borrowed from English use neutral tone (aka tone 0 or tone 5) for all syllables?
7
Third tone sandhi: when (if ever) does 3 3 become 3 0 instead of 2 3?
2
When is 我 pronounced ě?
10
Questions on a Hakka song and its particular Hakka dialect
1
Should the second character in 回来了 be pronounced with second or fourth tone?
7
Intonation and stress for Chinese pronunciation
5
How are consecutive neutral tones pronounced? What are the pitch levels?
1
Under the rules for tone sandhi and half 3-rd tones, is it correct to pronounce a (3-3) as (3h- 3h) or it must be pronounced (2-3)?
1
How do you combine the sandhi rules for consecutive 3rd tones and half 3rd tones in a sentence like 我很高兴?
4
How is 一举两得 pronounced?