Understanding the glyph origin of 占

I have the following etymology from Outlier Dictionary of Chinese Characters:

占 depicts cracks (卜) in a turtle shell and a hole (口) drilled into the shell during the divination process. Its original meaning is “observing cracks in oracle bones for the purpose of divination.”

But I could not understand what exactly they were referring to.

What is the relationship between divination and turtle shells? Why are holes drilled into turtle shells? Is this just to please the gods and get boons? Can you explain the cultural history at a high level?

What is the base meaning of it now?

Divination through reading patterns from animal bones (scapulimancy) was a widespread ancient human practice. A sub-type of this, pyro-scapulimancy, in which the bones are heated/burned to induce cracks (the patterns) was practiced in Bronze Age China, commonly with turtle shells.

After preparation, the shell would have a hole bored into it and a heated rod inserted in order to crack the shell through thermal expansion. The divination would be read from the pattern of cracks, and the prognostication engraved on the shell fragments.

The word for divination cracks was originally written as 「𡆥・⿴囗卜」

made up of divination cracking 「卜」 in a shoulder bone or scapula 「肩」 . The entire character is a simplified depiction of an oracle bone; see Why's flesh (⺼ ) the semantic component for 肩, 脖? for more details.

This character no longer survives in the modern writing system, being replaced by the unrelated glyph 「兆」, which is used a phonetic loan for the original word for divination cracks.

For an idea of how the divination process works, see e.g. 《殷虛文字丙編》８、９:

丙8 is an oracle bone made from turtle plastron, and 丙9 is the reverse side of 丙8. The holes drilled in 丙9 lead to cracks appearing in 丙8 when heated; the small numbers 一、二、三、亖（四）、𠄡（五） show the number of "divination rounds" that were performed on this bone, and 二告 on the bottom-left hand corner of 丙8 (between 亖 and 五) was a re-attempt at a divination round which the oracles or diviners felt were failed attempts at communicating with the spirits. 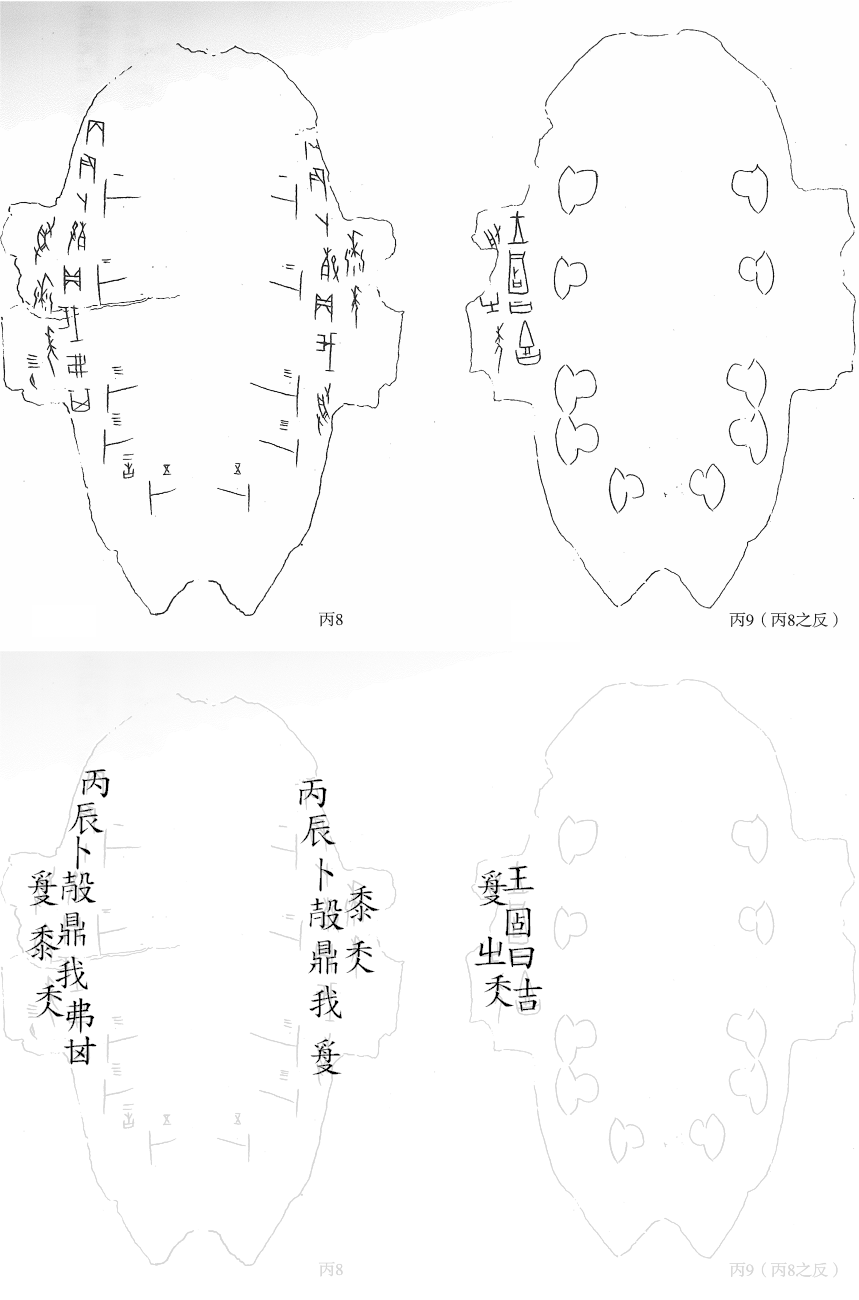 丙辰卜，㱿鼎（貞）：「我⿳爫舟又（受）黍秂（年）？」
Divination on the day of bǐngchén, Oracle Què asked: "Will we receive millet harvests?"

丙辰卜，㱿鼎：「我弗𠀠（其）⿳爫舟又黍秂？」
Divination on the day of bǐngchén, Oracle Què asked: "Will we not receive millet harvests?"

王𰉏（占）曰：「吉。⿳爫舟又㞢（有）秂。」
The King divined, prophesising: "It is auspicious, and we will receive the harvests."

Not the answer you're looking for? Browse other questions tagged meaning glyph-origin culture or ask your own question.