I read this in a notice put on a wall that calls on all Party members in the neighborhood to 监督表率敢于亮剑 in the endeavor to make the city cleaner and tidier (looks like an inspection team from the higher authority is coming).

敢于means "dare to do", but 亮剑 means what? A shiny sword? Does it mean they will work hard like wielding a shiny sword to cut the Gordian knot?

When a sword or other metal weapon is presented, its shiny surface would show brightness, that's why 亮出 was used as a verb for "draw/ show (weapon)" and later on people simply use it for "show/ present" or "take out" anything that was previously unseen e.g. 亮出一大疊鈔票 (take out/ show a wad of banknotes)

As for 亮剑, besides the literal meaning of 'draw a sword,' it is often metaphorically used for:

敢于亮剑 (dare to draw one's sword) in this context metaphorically refers to "ready to show one's ability to take on a difficult task, treating it like a real fight"

There is a TV show named <亮剑>. Since then, people use 亮剑精神 to express one's courageousness and resoluteness.

So, 敢于亮剑 means daring to apply the 亮剑精神 to deal with the issue.

It means you have the courage to fight; although you are not strong, you can fight against your enemy. Or a hard work.

Take out your arm.

A complete 剑 consists of two components - 剑身 (sword) and 剑鞘 (sheath) as shown below. 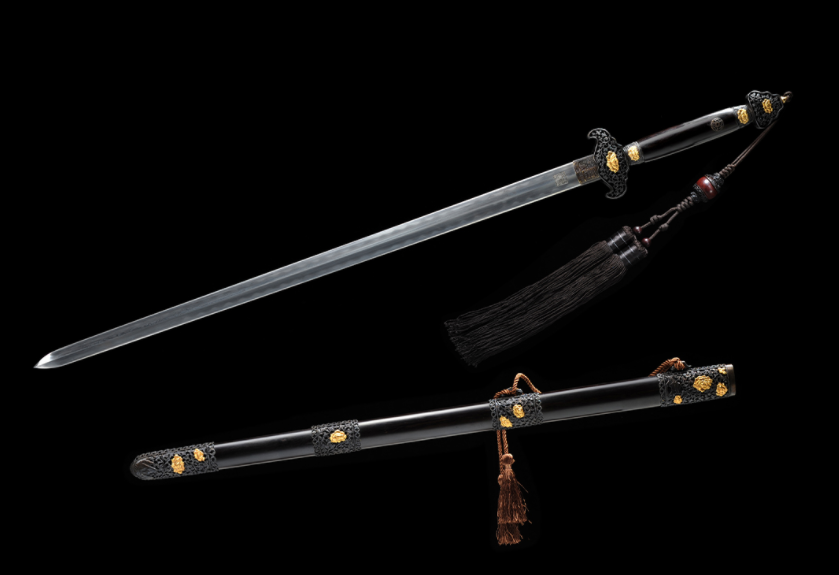 亮剑 means draw the sword, not necessarily entirely, out of the sheath. It has two purposes - to scare a person who usually does not know martial arts into surrender voluntarily or show one's desire/capability/readiness to kill/fight.

Rather than go through word by word translation, I prefer to put the true meaning to it, as the entire slogan is a speech using inference but direct to the point it wants to deliver.

监督表率 敢于亮剑 - As a model (social-political) overseer, one must not afraid of the powerful (person with higher rank) who has committed a crime or mistake. In such circumstances, one shall show them the equipped weapon (剑) and the readiness/determination (敢于) in using it (亮剑).

The weapon (剑) refers to the overseers has the backing up of the law or the instruction from the (communist) party leader, and showing (亮) it to the subjected person who is considered a criminal or wrong-doer.

This has been a famous doctrine(教條)/slogan(口號) since Mao's era. Maybe came out/born sometime during the cultural revolution, which had turned/encouraged everybody into/became an overseer/spy of others, including one's parents.

Not the answer you're looking for? Browse other questions tagged phrase or ask your own question.