Why is this Chinese clock so strange?

In the classical 1932 American film Shanghai Express starring Marlene Dietrich, the story is going on in 1931 in China on the Beijing–Shanghai railroad, and several times in the course of the film in order to show what time it is, a very strange-looking clock is shown.
Here's how it looks like: 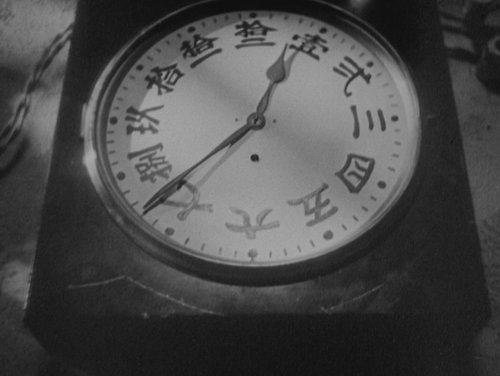 I know Chinese uses several sets of characters for numbers, the main two being:

My question is, what's the purpose of that strange way of using the ‘small’ numbers from 3 to 7 and the ‘big’ numbers for the rest?

From what I know, the ‘big’ ones are also called the ‘official numerals’, so the best explanation I could come up with is that, since on the clock they go from 8 till 2, it could be that they mark the working hours, like the first shift works from 8 a.m. till 3 p.m. and the second one from 3 p.m. till 8 p.m., and so on. Or you work from 8 a.m. till 3 p.m. (work = official numbers) and you're free from 3 p.m. (spare time = ordinary numbers). Could that be the point?

Unfortunately, googling doesn't help, there are hundreds of images of different clock faces with Chinese numbers, but everywhere they are uniform, never split as here.

TLDR This is a stylistic choice made by the filmmakers. People do not actually use clocks like that.

To clarify and improve on the other answers a little:

The main issue concerns the use (and particularly mixed use) of 大写 and 小写 numerals. (大写 and 小写 literally translate to "capital" and "lower case" if they are used to describe alphabets rather than numerals)

大写数字 are more complex versions of their 小写 counterparts, and are pretty much limited exclusively to financial applications like writing checks where it can reduce mistakes and make forgery harder. (See the difference between "financial" and "normal" variants: https://en.wikipedia.org/wiki/Chinese_numerals)

I believe that the filmmakers may have used some 大写数字 to make it look more exotic/different and signal that it's Chinese, as mixing between financial and normal is not proper.

In addition, seeing financial numerals used like this reminds me of the Japanese animation series Monogatari, where they are also used for stylistic effect. Look at this weird thing that is featured at 22 minutes in episode four of Nekomonogatari Shiro (and frequently throughout other installments of Monogatari series) 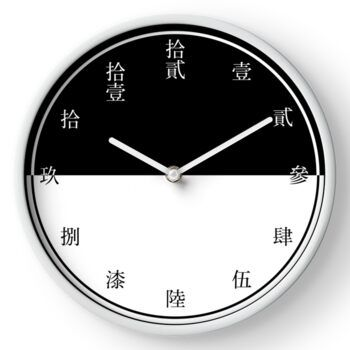 In China, no one like to uses a clock like that. (I'm not a native English speaker, so my English will be weird, sorry for that.) In China, clocks do not have a unified design style. So there are clocks with Arabic numerals, there are clocks with Roman numerals (which are the two mainstream designs), but absolutely no clocks with uppercase numerals. In fact, we prefer to use Arabic numerals (that is, lowercase numerals) instead of cumbersome uppercase numerals, because it is more concise and clear. As for this clock, he may have done it on purpose by the director. He may be trying to convey something to the audience in this form (but I don't see it) And... we all have cell phones, and we can pull them out at any time to check the time, right? (The following is the original text) 在中国，时钟没有统一的设计风格。所以有阿拉伯数字的时钟，有罗马数字的时钟（这是两个主流的设计），但绝对没有大写数字的时钟。 事实上，我们更喜欢使用阿拉伯数字（就是小写数字）来代替繁琐的大写数字，因为他更加简洁明了。 至于这个时钟，他可能是导演故意为之。他可能想通过这种形式向观众表达些什么（但是我没有看出来） 还有……我们都有手机，可以随时掏出来看一眼时间不是吗？

In fact, at that time, the use of Chinese characters was not as strict as it is now, which benefited from the repeated standardization of Chinese and the improvement of people's education level. For example, a Chinese character may have many different writing methods, and the current writing methods are only a few of them, which is particularly obvious in ancient Chinese inscriptions. After understanding these, look at the clock. The Chinese characters on it are now common. There are only problems in collocation, which does not affect understanding. That's not surprising. Of course, there is another possibility that the dial is made in the United States. The manufacturer is not familiar with Chinese, so he made a mistake.

7
How to write 400,002,000 in Chinese properly?
1
Why do the chinese count with 正?
1
Why is 两十万 (liǎng shí wàn) okay when it contains 两十 (liǎng shí) which is incorrect?
0
Are all these ways of saying 1.59 in Chinese currency correct?
3
When Chinese speakers read Arabic numbers, do they still read them in Chinese?
4
Why people more frequently say "三四个", less frequently say "三五个" or "四五个" or "五六个", and even more less frequently say "四六个"？
0
How to say this specific number in chinese?
1
Is there an equivalent of "alpha, beta..." for enumeration of software in Chinese?
2
Notes in reading money in Chinese (using 两 and 零）