What is the difference between 地 and 土?

Based on some dictionaries, the former seems to be more physically relating to the soil, earth; with the latter being more relating to soil or territory. I'm not sure how correct this is.

地 is related to territory and place, such as 地域 (territory), 地方(place), 地點(location). 土 is the particles on the crust of the earth.

地 (di4) is a generic term, it refers to land, or even more generically, surfaces that can be stepped on (this notably includes earth, and the Earth 地球).

Hence it appears in words that semantically relate to:

土 (tu3) is more specific, it means "ground", "soil", "dirt". As a matter of fact, it isn't as productive as 地 as a morpheme in multi-character words. It restricts compounds to less abstract referents:

土： 地面上的泥沙混合物
tǔ: a mixture of silt on the surface of the earth.

I read, the original character shows a lump of clay on a potter's wheel. So, originally 土 referred to clay.

On the right, the phonetic part is either a snake or maybe a wash basin. Drooze could tell us.

地：地球或地球的某部分：地质。地壳。
dì: the Earth, or some part of the Earth: geology, the Earth's crust. 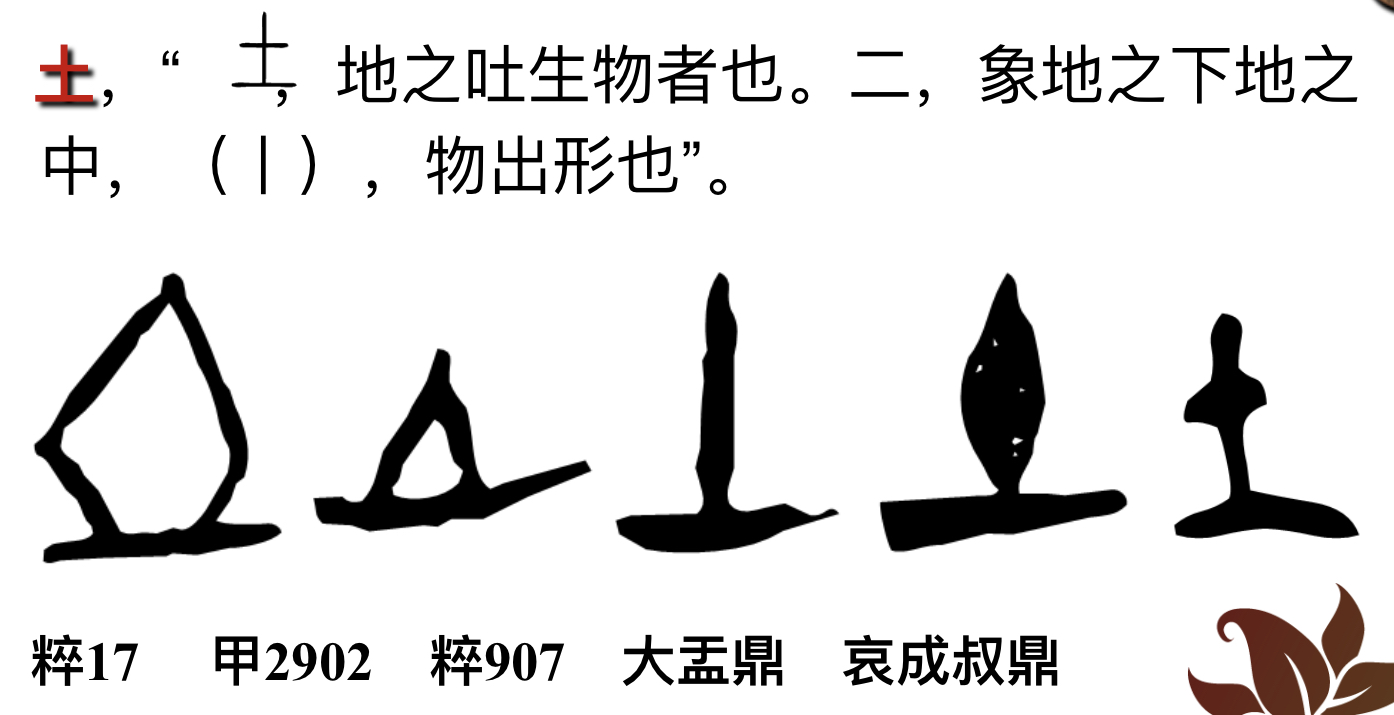 ①土 is a 象形字 (Pictograms). It's literally a pile of soil (the block on the bar) on the ground (the bottom bar). So it's original meaning is piles of soil. This meaning is still active in modern Chinese as a free morpheme. It's also very productive in forming words, e.g. 土豆、黃土.

②Since at that time agriculture was very important, piles of soil were used for rituals. You can see a lot of ritual-related characters composed of 土, e.g. 社、堯.

③The usage in rituals gave 土 a tribal/political implication; 土 was extended to mean one's own land/territory; it cannot be generalized to generic land.

①地 is a 形聲字 (Phonon-semantic compounds). While 也 mainly gives 地 its sound, it also has implication in meaning. 也 generally means spread/expanded. This is why 地 can be used for generic land. Actually, the original meaning of 地 is the opposite of 天 (sky).

②地 is delimited to mean the ground, e.g. 地上.

⑤地 is much later used to refer to things related to the earth planet, e.g. 地球、地理.

The difference between the overlapping meaning land

An interesting example to illustrate the nuances of the meaning land is 故土 vs. 故地. 故土 is one's homeland, while 故地 refers to some place where you have been before but not homeland.

Not the answer you're looking for? Browse other questions tagged meaning difference mandarin or ask your own question.