How to distinguish the difference between the pronunciation of different erhuayin?

I can't understand the difference between each phonetic symbol in the same row in the table below: 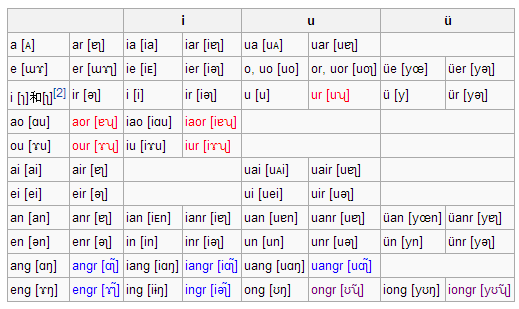 The picture is from Wikipedia.

I agree with TaraWordoor. You shouldn't be able to differentiate /er/ from /nr/ because when the sound /n/ is "erhua"-ed, you don't pronounce /n/ at all. So if you want to say 人儿, you're actually pronouncing /rer/. (BTW, these sounds are not in international phonetic alphabet. They're basically pinyin.) However, you should be able to hear the difference between /er/(/nr/) and /ngr/ because /ngr/ has a nasal sound at the end.

As you said, after you move to southern China, it's not a problem any more. It is mainly because "the southerners" (with all due respect) don't have 儿化音, and they don't have the difference between /n/ and /ng/ either. However, if you watch sit-coms about people from the north, it should be pretty easy to tell. I can't agree with some of the responses that standard Mandarin doesn't have 儿化音. Mandarin, as a partially artificial language, uses Beijing accent as a standard and northern accent in general as a base. So by definition, Mandarin should have 儿化音. The reason why you don't hear them often in the news is because 儿化音 is more colloquial and less formal. When you say something like 可爱的人儿, you're basically saying "cutie pie"; but when you say 可爱的人, you're saying "lovely person". Not just the meaning changes, the connotation changes as well.

Of course some of the syllables don’t have the “head” of “end”, but they must have a “central”. And the pronunciation of “erhuayin” is up to the “central” and the “end”.