混沌 and 葫蘆 are 聯綿詞/連綿詞. They are disyllabic words that the characters are only used to record the sound.

混沌 is originally 天地未開闢以前之元氣狀態 (the chaos before the sky and the earth were separated), and also extended to mean confused. In 《聯綿詞組叢考》, the word family of 混沌 includes 餛飩、糊塗、荒唐、崆峒、倥侗、汪洋、渾淪、鶻淪、昆侖 etc. They are all s0emantically and phonetically related.

葫蘆 is also related to the genesis myth. 闻一多 thinks 伏羲、女媧 (sort of the Chinese Adam and Eve) are phonetically related to 葫蘆. I also found newspaper saying 盤古 (the mythic figure who separated Sky and Earth) is etymologically 葫蘆. Some regional (Han and also other ethnic groups) myths also have it that people escape the Great Flood in 葫蘆. I don't know how credible these views are.

However, I haven't read anything that put 葫蘆 in the word family of 混沌 except for a Yi language (彝語) book. It that says that 葫蘆 is a symbolic for 宇宙混沌 (I couldn't find this mythic view in Han mythology), and that the Chinese words 葫蘆 and 混沌 have the same phonetic and semantic origin (reason is not given). The Yi version of 宇宙、葫蘆、囫圇 are clear semantically, phonetically and graphically related. The Yi and Chinese languages are closely related.

Are 混沌 and 葫蘆 are semantically and phonetically related? Is there any other evidence for or against it?

Inspired by the comments, I found the following.

Many ethnic groups in China, e.g. 彝、拉祜、哈尼、佤, have genesis myths connecting to 葫蘆, but not the Han people, possibly except for the name of 伏羲,女娲 and 盘古. I need to read more about it.

In Han legends, 孟姜女 was born in 葫蘆. It's made up by I-don't-know-who. Linguistically it's incorrect since 孟 means the eldest child, but in the legend 孟 and 姜 refer to two families.

According to the Baidu page, 端午節掛葫蘆 came from 呂洞賓, but he's said to be fro AD 798-880. It's too late for genesis myths. However, 葫蘆 is indeed somewhat sacred in Taoism. There are a lot of 法器 (magic weapon) that are made from 葫蘆.

Another implication of 葫蘆 in Han culture is 多子多福, because 葫蘆 has many seeds. This is similar to 石榴 (pomegranate). 葫蘆 is also phonetically similar to 葫蘆. But this is likely an coincidence since 福、祿 are two words and 葫蘆 was also called 瓠/匏 in ancient times.

No, it is not safe. These are just speculations. Some people (including some scholars) believe them, and they may be quite plausible, but I think the current evidence is not enough to make any definitive conclusion.

There are many theories floating around and many of them are speculations based on speculations. That's the main problem I'm trying to point out. 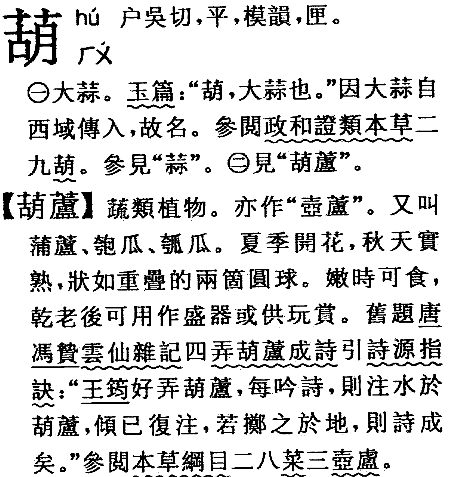 葫蘆 used to be written as 壺蘆. 壺 is a pot or kettle, which a 葫芦 resembles. 蘆 is a name for turnip and reed.

Then you have to establish the connection between 瓠/匏 and 葫蘆. Where did the second syllable come from? There are some theories, but there are so many steps in between. One can explain each step with a theory that has x% probability, and if there are too many steps, the summed-up probability is very slow, maybe no better than mere chance.

In short, one can't use today's names and pronunciations to deduce what they were at the beginning of civilization.

BTW: The original shape of 壺 is clearly potter/bronze ware, not a plant, though the meaning could be related. 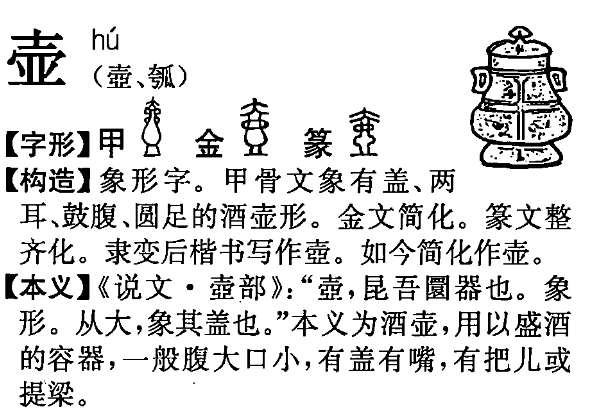 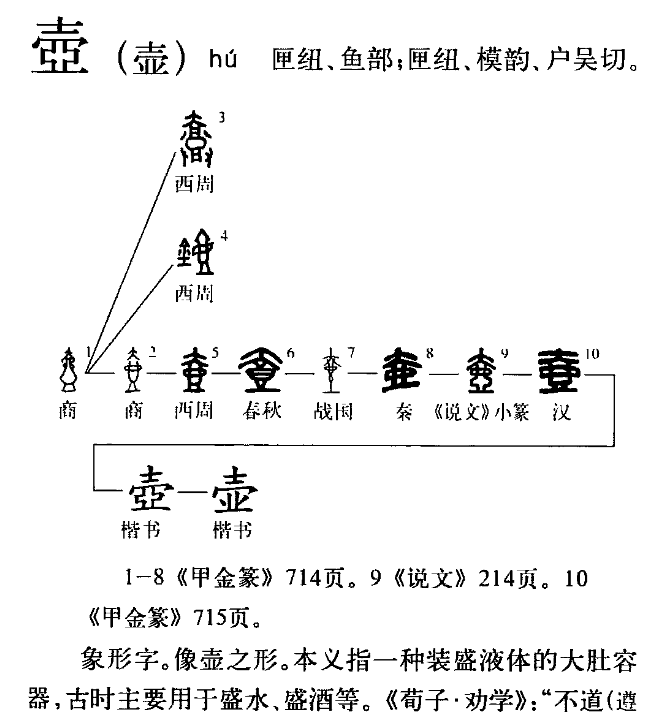 5
Meaning of 白 in words for "nonsense"?
13
快: why does "fast" also mean "happy"?
8
Are the Cantonese word 係 and the Japanese word はい related?
5
Is the Chinese character "蒙" being associated with Mongolia and ignorance coincidence?
8
乘 vs 承 - are they related?
1
How did the hedgehog come to mean gather?
1
What semantic notions underlie 草 (grass) with 拈花惹草 (philandering)?
1
𦰩 and 難 glyph origins. Did 难/難 used to be a bird?
3
How are 可爱 and Japanese 'kawaii' related?