Is it fair to assume that 站 and 占 are the same word?

It seems that the meanings "to stand" and "to occupy" are semantically related, and considering the pronunciation is exactly the same, is it fair to assume that the difference in orthography is simply a scribal convenience? Or is there reason to think of these as two truly separate items?

They're not the same word. Upon creation, they were pronounced differently. But 占 is the phonetic component of 站; their pronunciations were close. This is certain. What is less certain, though still probable, is their semantic relation.

站 is a very late-coined character, first found in documents from Tang Dynasty. Before that, to stand is called 立, which is still used now in Wu Chinese. The word used in Cantonese is most probably 企 (originally stand on tiptoes). In my dialect, we use len1, which I don't know if there exist a corresponding character.

It's probably that 站 (to stand) comes from 占, which was then written as 佔 (to occupy).

擅据也，著位也，固也。 to occupy, to occupy a position, fixed

The semantic development seems to be to occupy, possess (占) → to occupy a position (占) → to sit without moving (站) → to stand (站).

Phonetically, 站 has initial 知 and rhyme 咸, while 占 has initial 章 and rhyme 盐. They were pronounced differently in Tang and Song Dynasties. However, they do come from the same initial category 端 and rhyme category 谈, so they are indeed phonetically close. Likely, due to semantic differences, the two words were differentiated phonetically. This is common in Chinese. In modern Putonghua, however, the two words are pronounced exactly the same. In some dialects, the differentiation is still kept.

The component 占 in 站 is phonetic. The meaning mainly come from its semantic component 立. The fact that the two morphemes, now pronounced zhàn and lì, have the same meaning of to stand is a coincidence.

How 占 acquires the meaning of to occupy is also very interesting.

Another important meaning of 站 is a station. This was borrowed directly from Mongolian (jamci). However, where the Mongolian word ultimately originated is still debated. Some people think it's from ancient Chinese 驿, others think it's of Turkic origin.

Dialects that distinguish the rhyme groups 咸 and 盐 pronounce 站 and 占 differently. For example, in Cantonese, 站 zaam6, 占 zim3. Wu and Southern Min also pronounce them differently but generally (though some areas do) they don't use 站 for the meaning of to stand up.

While the sound mapping and semantics of both are similar, their origins and meaning are not the same. Typically, 占 is used in relation to divination, astrology, etc. whereas 站 is usually related to movement (to stop, a station, etc. ).

The original depiction of 占 was a turtle shell with cracks in it during the divination process. The top portion of 占 is actually the crack in the shell (卜) with the bottom depicting a mouth "transcribing" the divination (口). 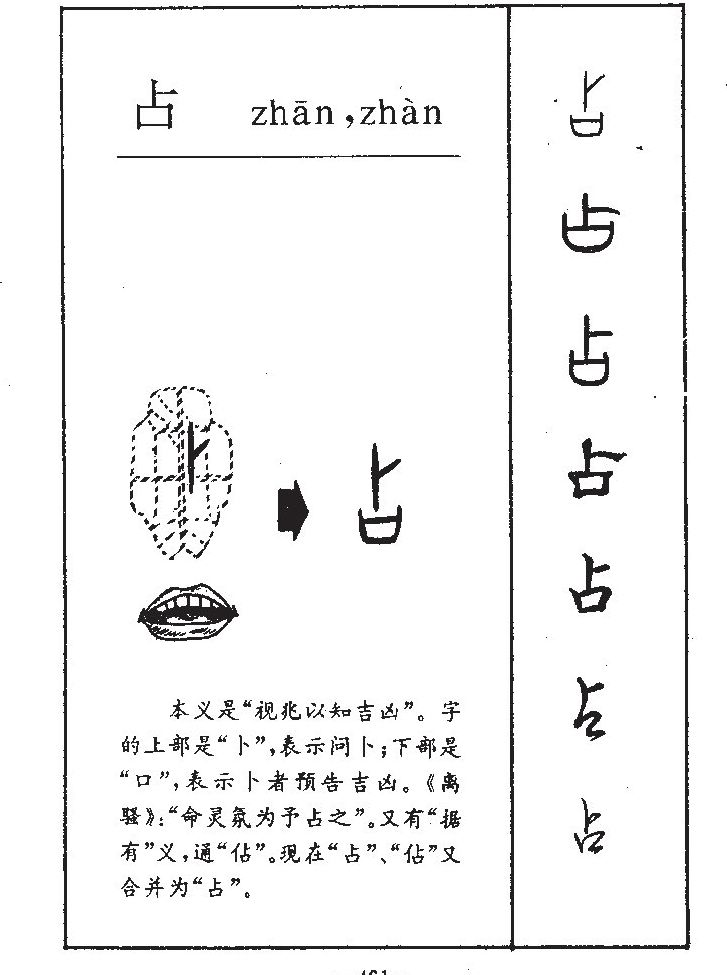 It is well known that Chinese has many words that have the same pronunciation and share the same radical, but the meanings differ. The case of "站, 占, 佔" is a classic example of it, and interestingly it falls on the joke that says whenever seeing an unknown Chinese word, a good guess can be made by "又邊唸邊,無邊唸中間" :)

Among the three words, 占 can be traced to "商代甲骨文", and it was the simplified form (简体, 3 & 4 below) of the original word (繁体, 1 & 2 below) that was abolished after Qin Dynasty.

The other two words seem to be derived from 占 with unknown justifications.

14
Do 之 and 的 come from the same word?
10
哪儿 vs. 哪里, Difference in Meaning?
8
Are the Cantonese word 係 and the Japanese word はい related?
4
Is there strong evidence that Classical Chinese was ever spoken?
1
What is learned by analyzing the component and relationship of 牧野 in regards to The Battle of Muye?
2
Why doesn't the Chinese language have a one character word for "young"?
5
Was the word 男朋友 borrowed from English (or maybe the opposite)?
3
Are the two 勾魂鬼 actually 黑白无常？
0
What are the surnames and given names of these fictional people of the Three Kingdoms?
2
Different accents/dialects applicable to the pinyin "r" sound