We have been working with a new character system that differentiates between a dot and a slash in Chinese characters.

The issue I have is being able to instinctively tell which one I should use. When I asked the creators of the system they said it is because it is related to the rules of Chinese calligraphy.

For example, on the character 下 the third stroke looks like a slash down and to the right, but it is actually a dot when handwritten.

Is there a Chinese computer font that shows the difference between the dot and slash more clearly? I had heard that there was one that was considered more standard, but I haven't been able to find it...

Before simply answering "there is such a font", I would like to seriously suggest you should not differentiate a dot and a slash. The reasons are:

If anyway you need a computer font to do such analyses, check

In the examples of the wiki page 國字標準字體, the first column is "standard" and the second is "conventional" (both should be considered correct): 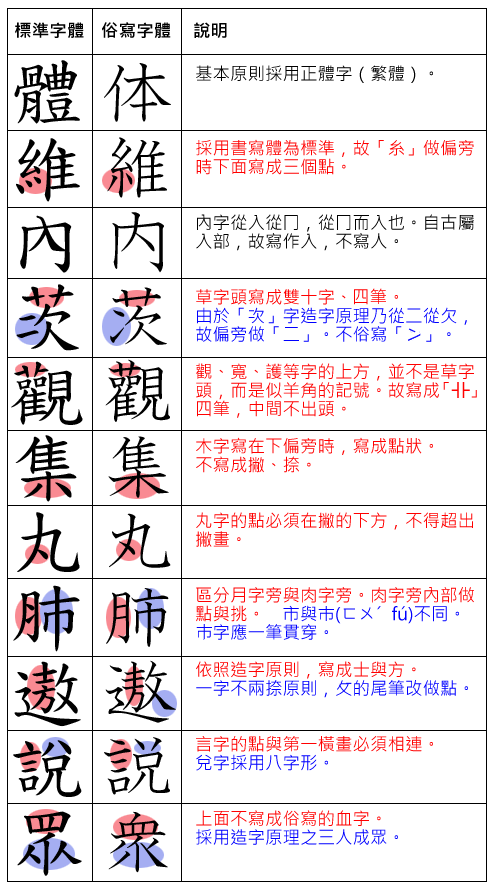 Some distinction of a dot and a slash is highlighted (維, 內, 集, 遨, 說, 眾). Yes, I should also mention even in Taiwan many scholars criticize this standard, "sometimes it departs from convention too much". And I've never ever seen any native speaker strictly follows such a standard when they are writing.

Other minor differences can be also found, see the comparison (微, 標):

I guess you can figure it out :) So, I'm afraid it's better not to differentiate a dot and a slash in a "character system".

I think you should use a fuzzy system instead of a strict one.
The difference between 點(dot) and 捺(slash) is not always obvious even to native user.

For example, in lower right corner of the character 木, the stroke is a slash, but when we writing the character 林, the slash become a dot in the left 木. Why? because there is no room to put a full slash there. The choice here is base on the aesthetic, and the difference does not matter much when writing with pen instead of brush.

I don't believe a input system based on Chinese calligraphy is a good choice.
Not everyone is familiar with the principles of Chinese calligraphy. And the input method should assist, instead of become a burden to the user. The computer should be smart enough to guess what a user wants based on the input, like auto spelling correction doesn't need user to type every alphabet correctly.

Not the answer you're looking for? Browse other questions tagged input-methods fonts calligraphy or ask your own question.

10
Are there any free/open fonts designed to help learn/read Chinese?
8
Which IMEs (input method editors) are actually most used in each of PRC, ROC, and Hong Kong?
4
How to learn to read Chinese calligraphic paintings (and Chinese handwriting)?
3
Tradtional Chinese fonts for website
1
Narrow fonts for Chinese characters?
3
For the HSK, what do I need to know about characters which appear differently?
5
Sogou IME (on Ubuntu): How to output pinyin with tone marks?
0
How to write Chinese fluently?
1
What about the orthography of 苹 (like in 苹果)? It seems consensus is missing
4
Further information on calligraphy piece? (Characters identified: 斿于⿰坴丮)