Help with signature and seal

I have a painting with this signature and seal, can anyone tell me anything about it? 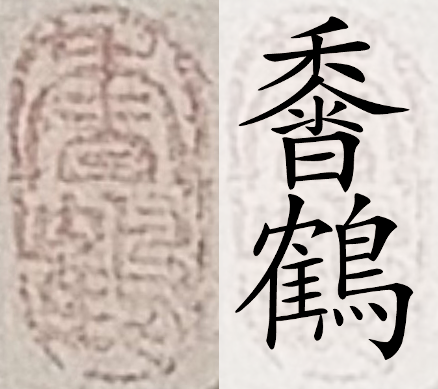 The seal characters are 「⿱黍日（香）鶴」, which literally translate to fragrant crane. This is either an art name (a professional pseudonym used by Chinese and other East Asian artists) or is referring to the artwork itself.

The cursive calligraphy above the seal possibly refers to the same characters, but they look like they were written in a non-standard way to me.

「香」 was originally written as 「⿱黍口」, comprised of semantic 「黍」 (a variety of high-grade millet used in glutinous grain and alcohol production) and an ideographic mark 「口」 used to distinguish the character 「⿱黍口」 from 「黍」.

Later on, 「口」 was complexified into various similar-looking shapes to 「甘」 and 「日」; the modern form inherits the shape of 「日」. 「黍」 was also later simplified to 「禾」.